SPICKARD, Mo. – Farmers gathered at a University of Missouri field day to hear about better breeding of cow herds listened to positive news on beef prices for 2014 and beyond.

Scott Brown, MU livestock economist, told producers he had a “glass half full” outlook. “There are lots of positive signs for fed cattle prices to top $1.30 a pound in 2014,” he said.

“The fundamentals are there. Corn prices are headed down to 2010 levels. And fed cattle prices will range much higher than in 2010.”

His crop slide showed current futures prices for corn near $4.50 per bushel in 2014.

Domestic consumer demand remains critical for continued higher beef prices. However, demand is not clear, Brown said. It has been in steady decline since the start of the Great Recession and recovery remains slow.

“The economy affects how much beef people eat,” he added.

“It’s difficult to get good numbers out of China,” Brown said. “But think of the potential. They have 1.3 billion people and their income grows at 7 percent per year. They want more beef. International demand remains important to beef producers.”

Brown spoke at Thompson Farm, the MU beef research center in Grundy County. Research in the cow herd there led to improved breeding protocols that boost beef quality. The herd research is part of the MU College of Agriculture, Food and Natural Resources, Columbia.

For the last of his talk, Brown told of the economic importance of growing quality beef.

“Food service companies tell us they want more prime beef – and are willing to pay for it,” Brown said.

If you are producing beef, produce for prime markets, Brown said.

“If weather improves, 2014 will be the time to rebuild the cow herd,” he said. “If you rebuild, replace with quality genetics. Use genetics that convert feed more efficiently and produce high-quality beef that consumers want.”

“Quality breeding gives a tenfold increase in prime grade,” Brown said. “The technology is here to rebuild with quality.”

The economist had to show his other hand. Good prices in 2014 depend on no droughts, growing demand, no severe disease outbreaks and lower trade barriers.

Technology for quality beef is on the shelf, awaiting use, he said.

“The outlook for 2014 is a lot different than anything we’ve seen in a long time,” Brown said. “It’s an exciting time to be in the cattle business.”

http://www.ozarksfn.com/2013/09/20/cattle-price-outlook-improves-in-2014-for-quality-beef-says-mu-economist/2013-09-20T01:00:00-05:00AdministratorMU Extension NewsBeef,in,of,the,toSPICKARD, Mo. – Farmers gathered at a University of Missouri field day to hear about better breeding of cow herds listened to positive news on beef prices for 2014 and beyond. Scott Brown, MU livestock economist, told producers he had a “glass half full” outlook. “There are lots of...AdministratorAdministrator ofn@ozarksfn.comAdministratorOzarks Farm & Neighbor Newspaper

Sticking with the original 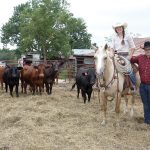