The University of Missouri-Extension

LAMAR, Mo. — Wet conditions this spring have made it difficult for crop farmers to plant

according to Jill Scheidt, agronomy specialist with University of Missouri Extension.

According to the National Agriculture Statistic Service, for the week ending on June 7, there

soybean fields,” said Scheidt. Before a replant decision is made, determine the cause of sparse

stand, stand density and condition, yield potential of sparse stand and if replanting will pay for

itself. “Producers also need to estimate the expected gross revenue from the sparse stand, cost to

replant, and yield potential and gross revenue from a replanted stand,” said Scheidt.

is reduced about 32 percent. “If corn still needs to be planted, do not switch to a shorter season

variety as corn will progress through stages quicker with warmer temperatures,” said Scheidt.

According to Scheidt, deficiencies are showing up in corn fields due to water saturated soils.

Some deficiencies are only temporary, like sulfur, identified by chlorosis between leaf veins.

These temporary deficiencies will fade once soils are less saturated.

Nitrogen deficiency, identified by a general yellowing of the leaves, may or may not be

temporary depending on the amount of rain soils receive. If corn does not green up after 5-7 days

of dry weather, it is likely in need of additional nitrogen applications.

According to the Nitrogen Watch, southwest Missouri is on track to have 16 or more inches of

rainfall from April 1 to June 30. Producers should be aware of the potential for nitrogen loss and

deficiency. “Rapid nitrogen uptake in corn occurs around the 8-leaf stage, so nitrogen should be

applied just before this stage to gain the most benefit,” said Scheidt.

If additional nitrogen is needed, it can be applied to corn up to the tassel stage for corn to still

was not applied to protect the flag leaf, as it accounts for 75 percent of grain fill. Fusarium head

scab, encouraged by warm, humid weather during flowering, is present in many wheat fields,

identified by a pinkish fungus on kernels, and contaminated grain may be discounted at the grain

“If wheat is fully mature, but not yet harvested, rain can reduce the test weight due to swelling,

but rain during the soft dough stage will not affect test weight,” said Scheidt. Wheat will re-

shrink after swelling, but not to the previous size, leaving the grain with the same dry weight, but

to drop with each re-wetting and drying cycle.

Soybeans favorable planting conditions in southwest Missouri are from May 1 to June 10. After

June 10, yield potential drops 16.5 percent and continues to decrease as the month progresses.

per acre by 10 percent if you have excellent seed quality, ideal conditions and if lodging has been

http://www.ozarksfn.com/2015/06/15/wet-conditions-impacting-corn-wheat-and-soybean-yields/2015-06-15T14:24:05-05:00Julie Turner-CrawfordExtended Story Informationconditions,impacting,soybean,Wheat,yieldsThe University of Missouri-Extension LAMAR, Mo. -- Wet conditions this spring have made it difficult for crop farmers to plant according to Jill Scheidt, agronomy specialist with University of Missouri Extension.According to the National Agriculture Statistic Service, for the week ending on June 7, there were only two suitable...Julie Turner-CrawfordJulie Turner-Crawfordjulie@ozarksfn.comAdministratorOzarks Farm & Neighbor Newspaper
conditions, impacting, soybean, Wheat, yields 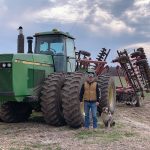