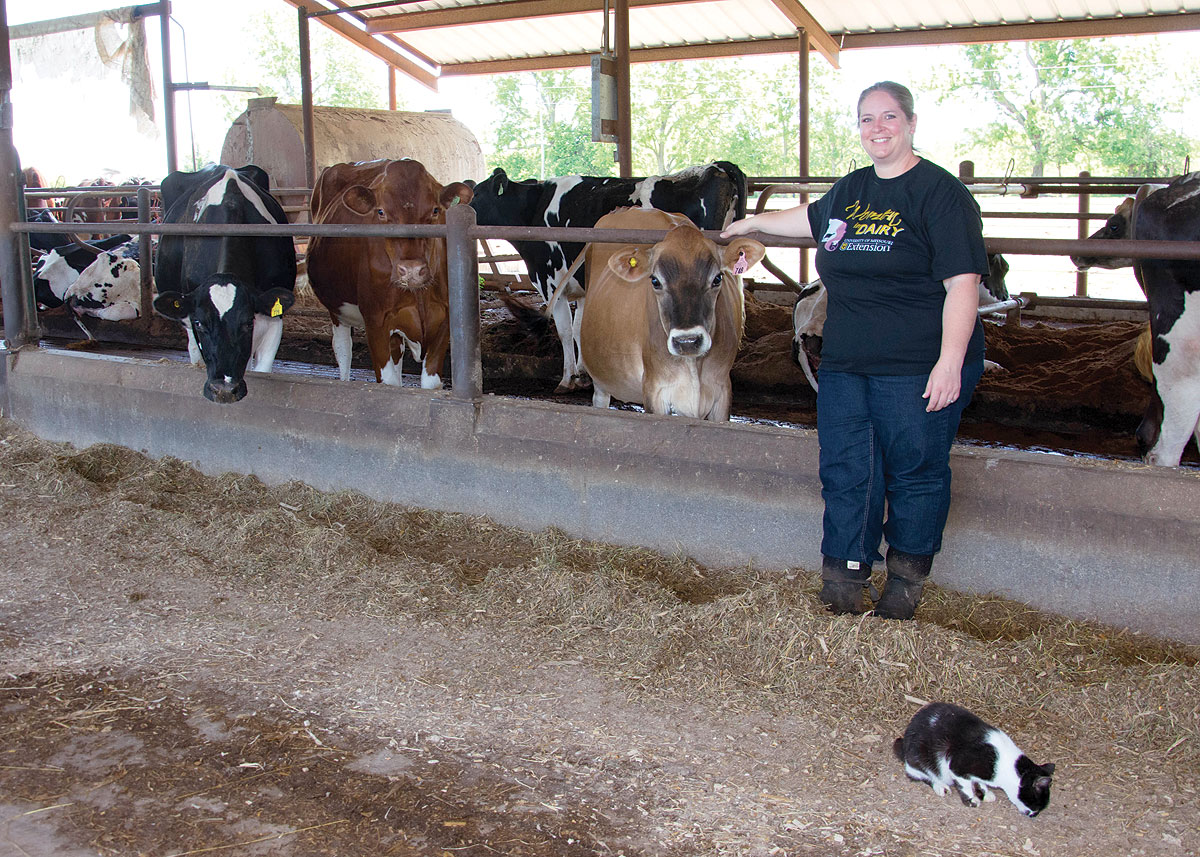 Dairy farming is in Michelle Eilenstine’s blood. Her parents had done it since the 1970s and she grew up learning all the ins and outs of farm life, including showing calves when she was just 10-years-old in 4-H and for Michelle, it has never stopped. Farming was part of her, so it just made sense for her to take over the family dairy farm, Ram-Elle Holsteins and Jerseys, and make it part of her family’s future.
Located on 240 acres in Mountain Grove, Mo., Michelle was a tomboy, the only girl of four siblings. She grew up milking cows, it was just part of life, one that she didn’t resent, but wanted to learn more about.
After graduating high school, she pursued her bachelor’s degree in agriculture at the University of Missouri in Columbia. While in school she worked in research and dairy nutrition.
“After I graduated I wanted to come back to the family farm,” Michelle affirmed.
She returned to her parents’ farm, but this time armed with new knowledge and the knowledge of understanding the science behind the way they did things on the farm. This was the whole reason why Michelle had gone to college. She knew that in order to have a future in the dairy industry, she knew she would have to evolve the time honored techniques used for decades to meet the demands of a changing, more technologically advanced world.
“It opened up my mind to new and innovative ways to do things. Being a small farm, we needed to use technology,” she explained.
In a management role, she took on more duties where she oversaw and coordinated herd nutrition, cow reproduction, milk quality, cow comfort, herd health, crop management and managing labor, which included hiring a part-time high school student interested in farming to help with daily chores.
Technology is the key to running a productive dairy farm, according to Michelle. She has brought some new ideas to the farm including using genomics. With genomics when a calf is born an ear punch is taken and sent to a company named Gene Seek, who gives a genetic breakdown of that particular bovine. The breakdown gives pertinent information such as a list of physical and production traits of that calf. This information is instrumental when making breeding and culling decisions.
Michelle also employs the use of a milk pasteurizer for all milk they feed their bottle calves. By heating the milk, all traces of E.Coli, other bacteria and even bugs are killed. This germ-free milk is fed to their calves and Michelle reports that it has made their calves more aggressive eaters and has decreased scours by 90 percent.
The Ram-Elle Farm runs approximately 29 Holsteins and six Jerseys. Michelle has found the Jerseys’ milk tends to run a higher butter fat content, while the Holsteins produce more milk. The cows produce approximately 60 pounds of milk a day, which is sold through a co-op they are a member of to a dairy plant in Seneca, Mo. Currently, their milk runs a 4 percent butter fat and 3.2 percent protein content, which is marginally higher than the 3.5 butter content on whole milk sold a grocery store that has a 3.2 percent protein.
To ensure high milk quality, the cows are fed a TMR, of corn silage, alfalfa and grain mix, consisting mostly of corn. Michelle changed feed rations, focusing more on homegrown feed versus purchase feed.
“I found that this improved cow health and production that way,” she said. This would explain why 160 acres of the farm is also used to produce their own corn silage fed to the herd.
In a male dominated industry, Michelle doesn’t feel alone. She explains that in certain areas of the United States, such as Wisconsin.
“There are large amounts of women working on dairies in more leadership roles,” Michelle said.
She attributes the smaller number of Missouri dairies to a lesser number of women in management roles such as herself. Still, that doesn’t mean it doesn’t come with its share of obstacles.
“It’s always a challenge wearing so many hats. It’s hard to combine those roles, but it all works out and finds a way,” said Michelle.
She knows firsthand when she gave birth to her son and a week later was back in the barn milking cows and doing chores. Michelle is also an online health coach who helps clients with tips on healthy eating, nutrition and fitness.
Michelle’s parents still live on the farm and have key roles. Her father, James Ramaeker, manages crops and mixes feed, while her mother, Carolyn, manages the house. Michelle’s husband, Loren, is also an equal partner and encouraged her to expand the herd to include Jerseys. Their 4-year-old son Chase is also a future farmer and has two sheep he plans to show at the local fair this summer, so similar to his mother years ago.
What words of advice would Michelle give anyone interested in the farming industry, male or female?
“You have to have a progressive outlook. Don’t be afraid to embrace technology,” she advised.

http://www.ozarksfn.com/2017/07/03/improving-through-education/http://www.ozarksfn.com/wp-content/uploads/2017/08/Eilenstine-1024x731.jpghttp://www.ozarksfn.com/wp-content/uploads/2017/08/Eilenstine-150x150.jpg2017-08-11T18:38:17-05:00Jaylynn MeyersMissouri NeighborsNeighborsDairy,farming,Holstein,jersey,Michelle Eilenstine,Missouri,Mountain GroveDairy farming is in Michelle Eilenstine’s blood. Her parents had done it since the 1970s and she grew up learning all the ins and outs of farm life, including showing calves when she was just 10-years-old in 4-H and for Michelle, it has never stopped. Farming was part of...Jaylynn MeyersJaylynn Meyersjmeyers28@gmail.comAuthorOzarks Farm & Neighbor Newspaper
Dairy, farming, Holstein, jersey, Michelle Eilenstine, Missouri, Mountain Grove