A Family of Farriers 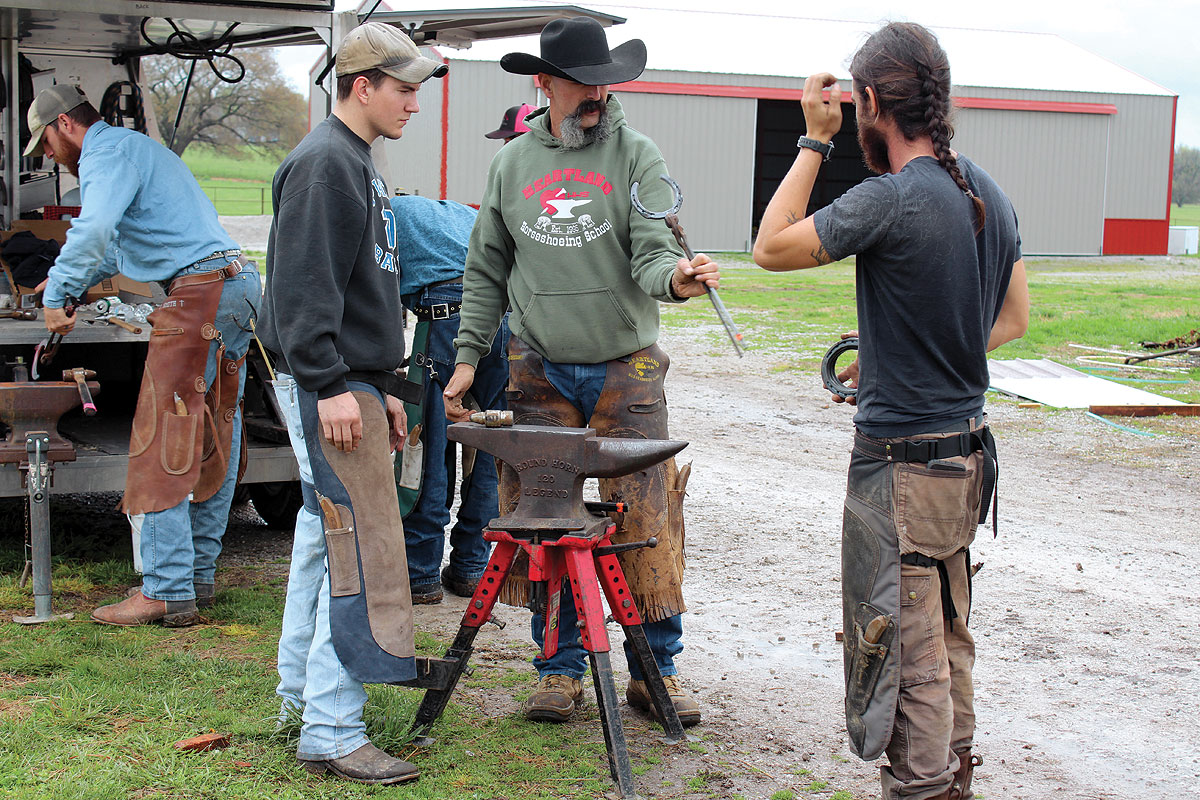 A strong work ethic, sense of humor, and a desire to learn the farrier trade are collective traits of the students attending Heartland Horseshoeing School in Lamar, Mo.
Rain or shine, the students are perfecting the art of forging steel and learning the proper method of trimming and shoeing horses.
Chris Gregory, owner and instructor at Heartland, has been a farrier since 1987 and has been teaching the trade since he was 23 years old.
When Chris moved to Missouri in 1994, he founded Heartland Horseshoeing School. Chris, along with his wife, Kelly and their children, Cody and Kirsty Gregory, and Cameron and Jacquelyn Whetten, all play an instructional role in the school.
“Cody is the best farrier of all of us. He has been the national champion in the World Championship Blacksmithing Association,” Chris said.
There are 25 schools similar to Heartland in the United States. The rigorous, hands-on instruction, curriculum and state-of-the-art facilities attract both domestic and international students.
“We have some of the best students because we don’t do any recruiting. All of these people are here because their dad is a farrier, or they have been in the industry, or someone sent them here. It is a very select group of students.”
Heartland does not have an admission policy, but all students must be strong enough to do the work and mentally tough enough to handle the situations they encounter during the course.
When students arrive at Heartland, they receive their own creative nickname. A sense of humor is a must since their first names are rarely used throughout the course.
The courses offered include an eight-week Practical Farrier Course, an intense 16-week Advanced Farrier Course, and a comprehensive 24-week Journeyman Farrier Course. All courses are rigorous and taught at a graduate level.
“Eight weeks is really short to learn it, but it is enough to start doing it as a living,” Chris remarked.
Students can expect to spend five hours per week in the classroom and 40 hours per week under horses or in the forge. Most students will spend around 20 hours of their off time studying for the written exams.
“If you are lazy at this school, you really stand out. If you are not the rock star, you are trying to catch them,” Chris said.
All students must learn equine anatomy or they struggle with building their understanding of conformation, gaits and pathology. Chris utilizes the textbook he authored called “Gregory’s Textbook of Farriery.”
His book extensively covers pathology, anatomy, hoof diseases and more. The 700-page book is complete with 3,400 color photos. This teaching tool is extensively utilized and studied by the successful students attending his school.
“There are so many things that can go on with a horse’s foot, it’s unbelievable. Every one of the feet will be different. Each one will have a different shape and challenge to get it right,” Chris said.
All students are required to complete various forge projects, such as making tools, shoes, forge welding and brazing. They also gain experience working in propane and coke forges.
The amount of projects the students make depend on which course they are taking. The Practical Farrier Course requires 23 projects, the Advanced Course requires 46 and the students in the Journeyman Course will make 69 projects.
“One of our first projects was a horseshoe sandwich. You take two horseshoes, fold them together and weld them using forge heat, not a welder. That is really hard. Right now I am making six hinds and six fronts out of bar stock,” Thom Hangey, from Pennsylvania, explained.
Ninja Squaw, known as Rebekka Strahle, explained one of her projects consists of making four shoes out of straight bar stock; two with clips and two without clips.
“The most rewarding is the forge work. It is neat to be able to shape metal as it is play dough. But it takes more skill and experience than what I have,” Major Dad, better known as Mark Bisson, explained.
Five out of seven students pass the course and graduate. Those students will receive a Certificate of Completion, which is highly respected throughout the farrier industry. The skills they learn at Heartland will prepare them for the Farrier International Testing System, or the FITS exam.
“We are under live horses five to six days a week. That is not something you can just find anywhere. You can spend as much time in the forge or the classroom, but it isn’t the same as getting under a horse and actually doing it. Heartland is top of the game. If you want to learn the most, this is where you go,” Wolf Man, aka Jesse Huff, exclaimed.
“Farriery is an art with a scientific backdrop. The demand is huge. If you can do it, you have a job. There is more demand than practitioners,” Chris remarked.
Chris travels the world conducting clinics and seminars. He has been in the top 10 at the World Championships Blacksmiths Contest and was inducted in the International Horseshoeing Hall of Fame in 2008.

« Building with Beefmasters
Still in the Family »