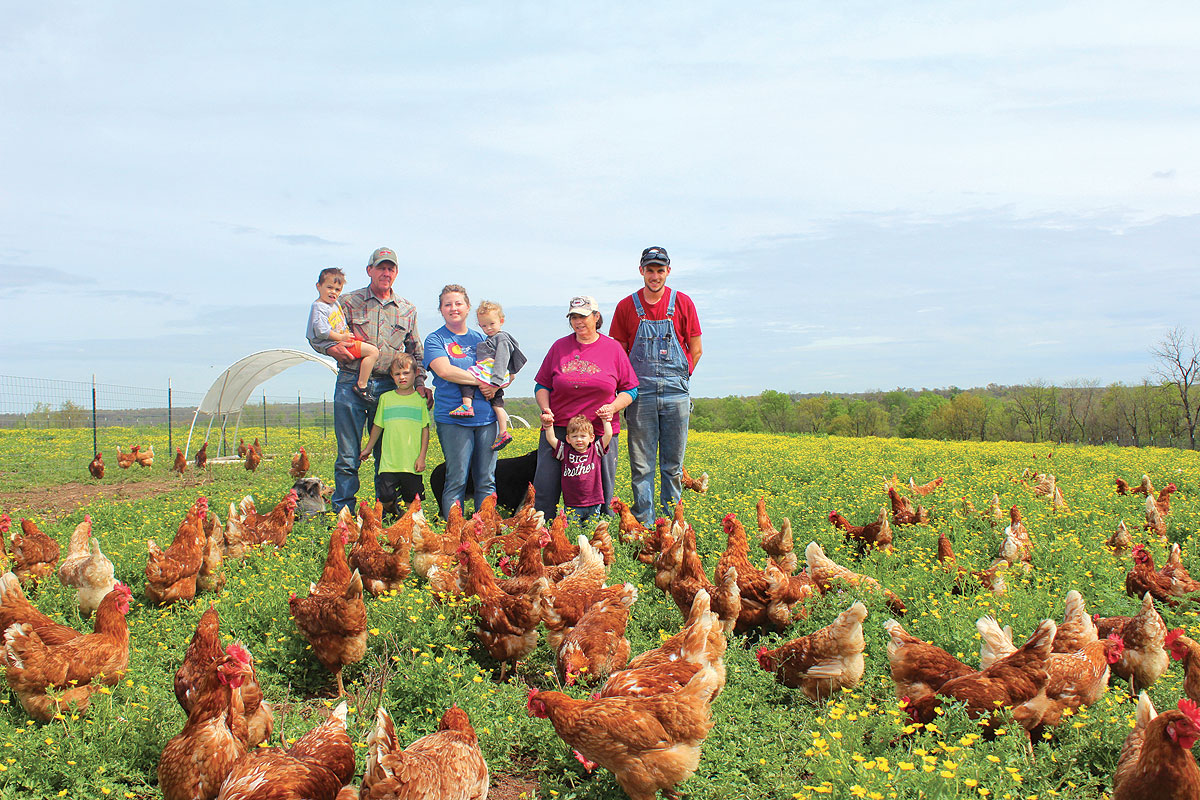 Like many farmers in Polk County, Ronnie Choate’s roots started in dairy cattle. Ronnie, along with his wife Debbie, own and operate Riverbend Farm near Pleasant Hope, Mo.

Ronnie spent 30 years milking Holstein and Jersey crossbred cows, and 20 years raising turkeys. Due to changing markets and their turkey barn catching on fire, Ronnie and Debbie decided to transition from raising dairy cows and turkeys to beef cattle and laying hens.

In August 2016, Ronnie decided to return to the poultry industry with the help of his youngest son, Tyler. Together they work with Vital Farms to produce pasture-range eggs.

The Choate family built an egg house and two barns. The barns are home to 12,600 Highline Brown laying hens. These hens lay on average 11,000 brown eggs per day. The birds always have access to food, water, shelter, shaded areas outside and 31.5 acres to roam.

“When we built the barn, we gave them extra square feet in the barn, extra nesting area, extra feeders and waterers. We also made sure our door space and scratch area in the barn was in compliance. Their standards are above everybody else’s standards,” Tyler, who manages the operation, explained.

The hens are outside 365 days a year and moved to a new lot every three weeks. This gives them access to fresh air, grass and insects.

“When they are outside they are healthier. You can keep the birds in production longer because they will lay eggs longer. They look forward to going outside every day. They love it. It gives them space to peck around, run and fly,” Tyler added.

The birds voluntarily return to the barn at dark to roost. The doors are shut at night to protect them from predators, such as coyotes and skunks.

The doors of the barn are opened three hours after sunrise. This timing encourages the hens to lay their eggs in the barn and not outside.

“The hens will lay 75 percent of their eggs after sunrise,” he added.

The eggs arrive in the egg house on a conveyer belt. Every morning the eggs are collected, sorted and stored in the cooler. Since the egg house is separate from both barns, Tyler installed cameras in the barns and a large-screen TV in the egg house to monitor the conveyer system while sorting eggs.

“The camera system keeps things running smoothly. I can see if there is a problem with the conveyer without going to either barn. This makes things more efficient,” he explained.

The cooler is kept between 40 to 42 degrees Fahrenheit to maintain egg quality and prevent the eggs from sweating, which will happen if the temperature of the cooler fluctuates.

“All eggs are protected by a membrane that will wash off if they are exposed to moisture. The egg doesn’t keep as long because without the membrane bacteria and air will enter the egg,” Tyler remarked.

Tyler communicates weekly with a nutritionist from Vital Farms. Daily, the birds are fed a customized feed ration and during the winter months, organic alfalfa hay. Every Monday morning, he emails a report of egg production, feed and water consumption, mortality rate and temperatures to Vital Farms. Their nutritionist will make diet recommendations based on the report and the age of the hens.

“When they get older they need less protein and more calcium in their feed for their egg shell quality. When they are younger they need more protein to make them grow and fill out,” Tyler explained.

If the birds get sick he is only allowed to use natural remedies, such as oregano, in their water.

“They are the luckiest chickens out there,” he said with a grin.

While Tyler concentrates on managing the hens, Ronnie focuses on his 130 head of crossbred beef cows. He uses high performing Angus and Hereford bulls with EPDs promoting growth, muscularity, and carcass traits, such as ribeye area.

“We always study the EPDs before we buy bulls,” Debbie added.

Ronnie maintains a strict 90-day calving window in his fall and spring calving herds so his calves are uniform in size. He also preconditions his calves before they are sold.

“I give them two rounds of respiratory and blackleg shots. They are dewormed and broke to the bunk,” Ronnie said.

Ronnie and Debbie consider their farm a family operation, even the grandkids are involved. They have three sons Brad, Brent and Tyler. Tyler manages the hens, while Brad and Brent work off the farm but lend a hand when needed. Brad and his wife Kim have two sons, Clayton and Trenton. Brent and his wife Lyndsey have twins, Luke and Anna. 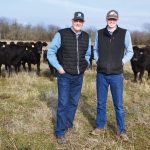 Two and a Half Generations 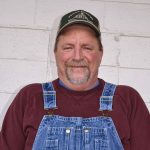