Creating a Future with Cattle 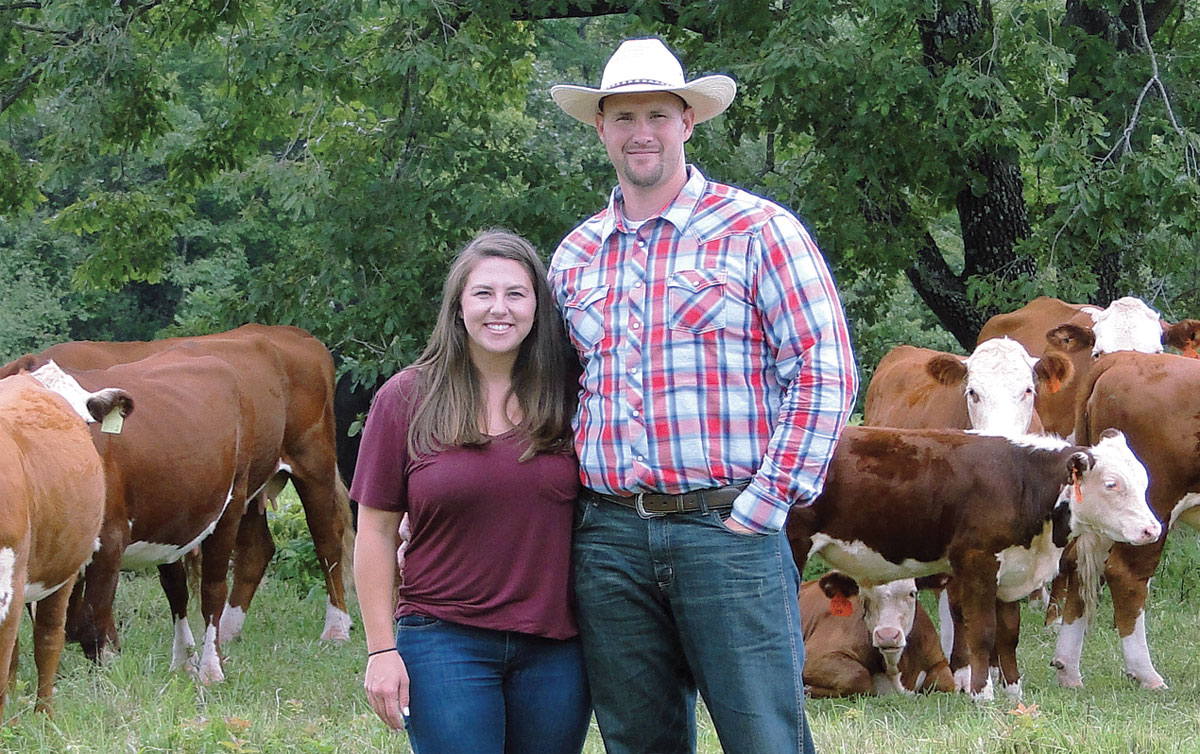 When someone grows up in a rural area of Oklahoma where half the people are relatives, the odds are an exposure to cattle will happen even if the immediate family doesn’t raise them.

This is what happened to Shiloh Shores of Park Hill, Okla.

His parents, Wayne and June Shores, never raised cattle but an older cousin named Butch Cowan did. Shiloh worked for his cousin, who eventually became his mentor and taught him a minimal hands-on system that, for Shiloh, has produced a healthy, hardy and productive herd.

This is critical because Shiloh wants to leave his wife Cassie, definitely not raised as a farm girl, with as little daily maintenance as possible should something unforeseen happen to him.

“My mom thinks I’m crazy and laughs because being a farm wife is not what they pictured for me, and she gets this rather dazed look on her face when I start talking about cattle,” Cassie said with a laugh. “However, I couldn’t be happier and she knows that.”

Somewhat ironically, the couple met at Carter Baptist Church and went on a picnic for their first date, perhaps an omen that Cassie’s future was going to involve the outdoors.

When Shiloh finished high school, he used his savings to buy two commercial cows and a $500 bull from another cousin, which was the start of his commercial herd. While earning a wildlife/biology degree at Northeast State University in Tahlequah, Okla., Shiloh played basketball for the university when the team won the national championship in 2003. Now Shiloh is a middle school teacher and coach in Stilwell, Okla., while Cassie teaches high school aged and adults at the Indian Capital Technology Center in Talequah.

Cassie is definitely a partner on the ranch. Among many of her contributions is transferring Shiloh’s hand-written records into easily assessable spreadsheets she developed with her own formulas.

In 2009, the couple bought 96 acres from yet another cousin, plus an additional 30 momma cows to add to his small commercial herd through an FSA loan. The land was part the 180-acre Indian allotment given to his great grandfather, one of the Carter brothers who ended up with most of the land in the area.

When Shiloh bought the land, it was heavily overgrown. He spent 40 hours brush hogging and had an amazing 22 flat tires from honey locust thorns. The flat tires were extremely time-consuming in an already over-crowded weekly schedule, and out of desperate frustration, Shiloh tried truck tires with excellent results because the steel belts cut off the thorns.

Next Shiloh bulldozed a few particularly rough areas and subsequently sprayed for weeds the following three years. The only thistles on the whole plot were three on a pond bank which he quickly destroyed. He has not re-sprayed with good results as a result of large pasture rotational grazing and brush hogging.

“I’m still new at this so much of what I do is experimental. I may try spot spraying a few stubborn areas instead of brush hogging to see if that’s a more efficient system here,” Shiloh said.

Shiloh leases another 100 acres similar to his 96, while also keeping cattle on his father’s 70 acres, another part of his great-grandfather’s allotment. His father’s land is much gentler and easier to use because it was originally used for crops and was lightly terraced by the government to help in the relocation. Shiloh keeps most of his commercial herd on his father’s land.

Shiloh was teaching and developing his commercial herd when the 2012 drought hit. At that time he was using only his original 96 acres, which had one pond and a single spring. The pond dried up and the spring was reduced to a dribble, resulting in the sale of 20 of his cows. He simply didn’t have time to haul water while teaching and couldn’t afford the skyrocketing hay prices.

Shiloh believes the Herefords offered a better chance to make money because breeding stock is more profitable and because the breed is hardy and docile qualities that fit his limited time schedule. He now has 50 females, mixed commercial and registered, bred by three registered Hereford bulls and one registered homozygous Black Hereford, which is part of his experimental breeding program. His goal is to produce the most marketable and hardiest animals with inherently strong immune systems.

“At this point, I keep 100 percent of my Hereford heifers and 50 percent of the commercial ones because I’m still growing my herd to a maximum of 75 to 100,” Shiloh said. “Growing a ranch from scratch is a long, slow process, and I hope to be a full-time farmer someday in the far future.”

Shiloh is at the point of developing a closed herd. His best bull, a horned Hereford, is only 2 years old and he plans to use him for many years as he experiments with line breeding. He also uses no vaccination protocol, ruthlessly culls any animal with health issues and has not pulled a calf in 10 years.

An important and recent addition to his operation is the use of a liquid feed called Mix 30, developed by Agridyne in the Midwest with the apparent unexpected side benefit of excellent fly control. The flies appear to have simply disappeared and the side effect is causing a buzz. He also likes this liquid feed because it has a 10 percent fat content that limits the amount the cattle consume while keeping them healthy and satisfied. The closest dealer is 40 miles away and Shiloh is considering becoming one because of the products outstanding performance and to have a source at home.

Shiloh is extremely appreciative of Butch Cowan’s mentorship and prizes two logical specific pieces of advice. The first was not to get into cattle to make money but to do it because you love it. The second was if you need money, sell a cow; and if you don’t, keep the cow and continue growing your herd.

http://www.ozarksfn.com/2017/09/27/creating-a-future-with-cattle/http://www.ozarksfn.com/wp-content/uploads/2017/09/Shores-1024x643.jpghttp://www.ozarksfn.com/wp-content/uploads/2017/09/Shores-150x150.jpg2017-09-27T13:38:14-05:00Terry RoppArkansas NeighborsNeighborsCassie Shores,Cattle,commercial herd,hereford,Oklahoma,Park Hill,Shiloh ShoresShiloh Shores uses lands granted to his great-grandfather to build his cattle operation When someone grows up in a rural area of Oklahoma where half the people are relatives, the odds are an exposure to cattle will happen even if the immediate family doesn’t raise them. This is what happened...Terry RoppTerry Roppterrymerrill@hotmail.comAuthorOzarks Farm & Neighbor Newspaper
Cassie Shores, Cattle, commercial herd, hereford, Oklahoma, Park Hill, Shiloh Shores