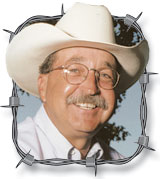 Maybe you saw the same news clip I did from a couple of weeks ago, entitled, “Cow escapes in Brooklyn, New York.”

It was an aerial video, shot from a news helicopter, of either a steer or bull (it was not a cow, but I doubt too many people in Brooklyn know the difference) that had escaped during its delivery to a local processing plant. Police had chased it until it had entered a soccer field complex that was surrounded by a chain-link fence. The fun started when they tried to catch the animal in a 5-acre “field.”

Evidently, no one from the police department, or animal control, had access to a dart gun that would have enabled them to safely subdue the Brahman-cross animal who, by this time, was as agitated as a Maytag washer. I did, however, have to admire the resourcefulness of the officers who had removed the net from one of the soccer goals and were using it to try to throw over the steer as it charged at them. By this time, I was laughing so uncontrollably that my wife came into the room to see what the commotion was.

“What is so funny?” she asked.

I just pointed to the TV screen and exclaimed, “What were they going to do if the net would have hit the target? I’ve never played soccer, but I doubt, very seriously, that a soccer net is going to stop a 1,000-pound steer that’s as mad as he is.”

“Ah,” she sighed. “Have you forgotten when you roped the steer off the three-wheeler when we first married?”

I hung my head as I replied. “I had forgotten, until now.”

Thirty-some years ago, when we first moved to the farm where we still live, I had a 400- to 500-pound calf that was feeling a little under the weather. I knew he needed a shot, so I had tried, unsuccessfully, for about 30 minutes to separate him from his mother and run him into the corral to administer the medicine. This was long before I had a dart-gun, but I did have one of the old-style, three-wheeled ATVs at that time. In my mind, all I needed to do was rope the calf from the three-wheeler, jump off, give him the injection, remove the rope, and everybody would be good.

Since I was no roping cowboy (and still am not), I drove along beside the calf until I could just drop the loop over his head with my left hand while maintaining the throttle with my right hand. That part was easy enough and successful on my first attempt. As I slowed the ATV and allowed the calf to take out the slack in the rope, that was my first realization that a calf at that weight, even a sick calf, was stronger than me and the three-wheeler combined, and he was headed toward the woods at a dead run.

Thinking as quickly as my feeble mind allowed, I dallied my end of the rope around the left handle-bar of the three-wheeler, which, of course, caused the handle-bars to abruptly turn right and Newton’s Laws of Motion assured that my body would continue in a straight line.

To make a long story, short. The calf stopped when the ATV landed against a tree. I picked myself up off the ground, gave him his shot, and had to cut the rope with my pocket knife to release him. The afternoon activity had cost me about $200 in repairs to the machine, a $25 rope, two bucks worth of bandages for myself, and a story my wife will use forever. Now, if I’d only had a soccer net…

http://www.ozarksfn.com/2017/11/27/life-is-simple-345/2017-11-27T15:18:10-06:00Jerry CrownoverEditorial / OpinionsCattle,cow,escape,Jerry Crownover,New York,soccer fieldMaybe you saw the same news clip I did from a couple of weeks ago, entitled, “Cow escapes in Brooklyn, New York.” It was an aerial video, shot from a news helicopter, of either a steer or bull (it was not a cow, but I doubt too many people in...Jerry CrownoverJerry CrownoverZaCrown@aol.comAuthorOzarks Farm & Neighbor Newspaper
Cattle, cow, escape, Jerry Crownover, New York, soccer field

« Spring Into Good Nutrition
Across the Fence »