A Part of the Family 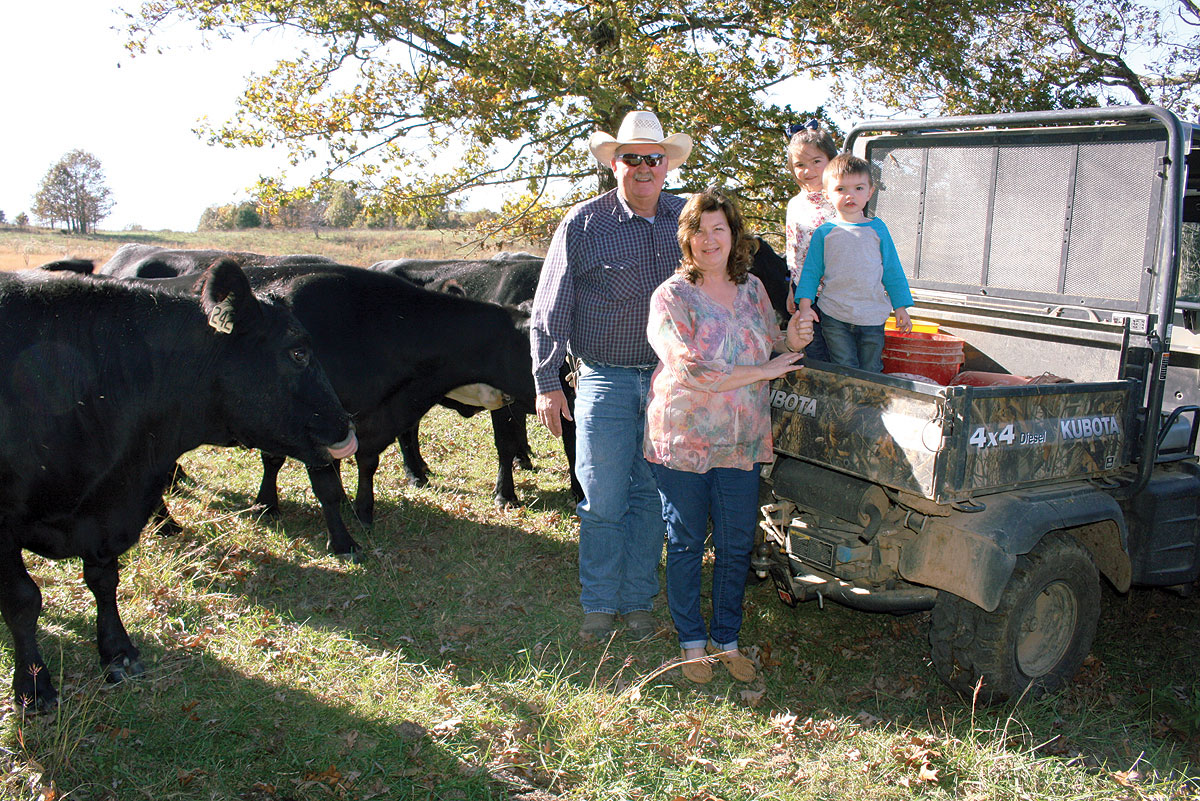 Raymond and Cindy Rasor are proud of their daughters, their grandchildren and their farming heritage in Howell County, Mo.

Raymond’s family came to the Peace Valley/West Plains, Mo., area from Arkansas in the mid 1970s after their family’s farm along the Buffalo National River was taken over by the National Park Service. His family had been on the farm since his grandfather, Dewitt Rasor, purchased it in about 1920.

“I was about 21 years old or so at the time my folks, Helen and Russell Rasor, moved up here,” Raymond said. “I started riding behind my Dad on a horse when I was about 2 or 3 years old. We did everything on horseback then. I spent summers following cows on a horse, going through rivers and such. I thought every kid in America grew up that way.”

Raymond might not spend as much time in the saddle today, opting to utilize a UTV instead, but one thing hasn’t changed – he still loves being a cattleman.

“I like raising cattle; I grew up doing this all my life,” Raymond said. “It’s just part of me. I’ve done a few sideline jobs off the farm, but it was the love of this cattle business that’s kept me in it.”

In addition to raising cattle, Raymond also custom cuts fescue seed and spreads fertilizer. “I guess I don’t know when to quit,” he said.

Cindy grew up not far from the Rasor spread, and they were recently able to bring the farm she grew up on back into the family – bringing Rasor Farm full circle.

“My dad was a salesman,” Cindy recalled. “We raised baby calves and he was always doing something with his tractor and plow. He didn’t have a lot of education about farming, but he learned as he went.”

Raymond and Cindy, who is a retired teacher, own about 1,600 acres and rent an additional 500. They utilize wooded areas of their operation to harvest timber and offer a few hunting leases each year. The remainder of the property accommodates about 320 mostly Angus momma cows and forage production.

“We’ve still got a few mixed cows and I really love a black baldie calf,” Raymond said. “Once in a while, we will throw in a Hereford bull and get some calves, but the majority are Angus.”

Raymond’s grandfather’s and father’s cattle operations were mixed cow herds, serviced by mostly horned Hereford bulls. When Raymond was about 15 years old, the Rasor family got their first Angus bull.

“I try to use low birthweight bulls because as strung out as I am, I might not see them everyday,” Raymond said. “That gets me out of maybe having any calving issues. I like calves to be in that 60-pound or so range for the mature cows, and we AI our replacement heifers because we like for them to calve out pretty close together; usually within 30 days. I like to keep mature cows in a 90-day calving period in the spring and fall; it doesn’t always happen, but that’s what I shoot for.”

The Rasors also buy about 200 to 300 head of yearlings annually, backgrounding them along with their own calves, which are weaned at about 500 to 600 pounds.

“We go right into feeding and growing them from that point,” Raymond said, adding that calves receive a ration consisting of hominy and dried distiller’s grain, mixed with ground hay or silage, and a conditioning premix for about 90 days. “We’ll run that to about 14 to 15 percent protein, about 4 percent fat… We like for them to gain about a pound a day,” Raymond said.

The Rasors currently work with a broker to market their cattle.

Raymond is also in partnership with a nephew with another 100 cows.

Hay and pasture management are important to Raymond. The farm produces it’s own forages.

“I like for cows to make it to mid-January before we have to give them any feed, if I can,” Raymond said. “This year is a whole different deal because we are running out of grass. I don’t like to overstock my pastures so that my cows can have that grass. I also feed several lick tubs. They might not be the most economical, but it helps keep cows in shape.”

A soil testing routine has been critical for hayfield production. Hay and silage are also tested to help Raymond and a nutritionist determine what supplements might be needed.

While raising cattle has evolved over the decades for the Rasor family, there’s one thing that remains from the days of Raymond’s grandfather – a heart-shaped brand.

Raymond proudly shows the old hot branding iron brought from Arkansas by his father. Raymond was only about 2 years old when Dewitt passed, so having the branding iron is like having a piece of his grandfather with him.

“That’s been our brand for years. I really don’t know the story of the heart brand, but that was his brand. We still brand every cow with a heart. We’re working on the fifth generation now,” Raymond said as he looked at his two young grandchildren, Kooper and Kynlee. He and Cindy are also anxiously awaiting the arrival of a new granddaughter this spring.

Cindy and Raymond’s daughters, Karlee, Kelsie and Kinsey, all grew up working on the farm. Raymond admitted his girls are pretty good hands, and despite having their own careers, he’s proud they want to continue the tradition began in Arkansas nearly a century ago.

“They are all married now, and we have one son-in-law who doesn’t know beans about it, but he’s really trying,” Cindy said. “The other two (sons-in-law) have backgrounds in cattle and are really good help. Raymond is really looking down the road to help them get started.”

“The Edward Jones guy told me a while back that I needed to figure out how to disburse this land,” Raymond said. “I told him, ‘Paul, how long have your known the Rasors? We don’t sell land, we just keep it for the next generation.’”

In addition to their farming and cattle operations, the Rasors are also the owners of Circle C Western Store in West Plains, Mo., which is managed by their daughter Kinsey. They have had the store for about five years.