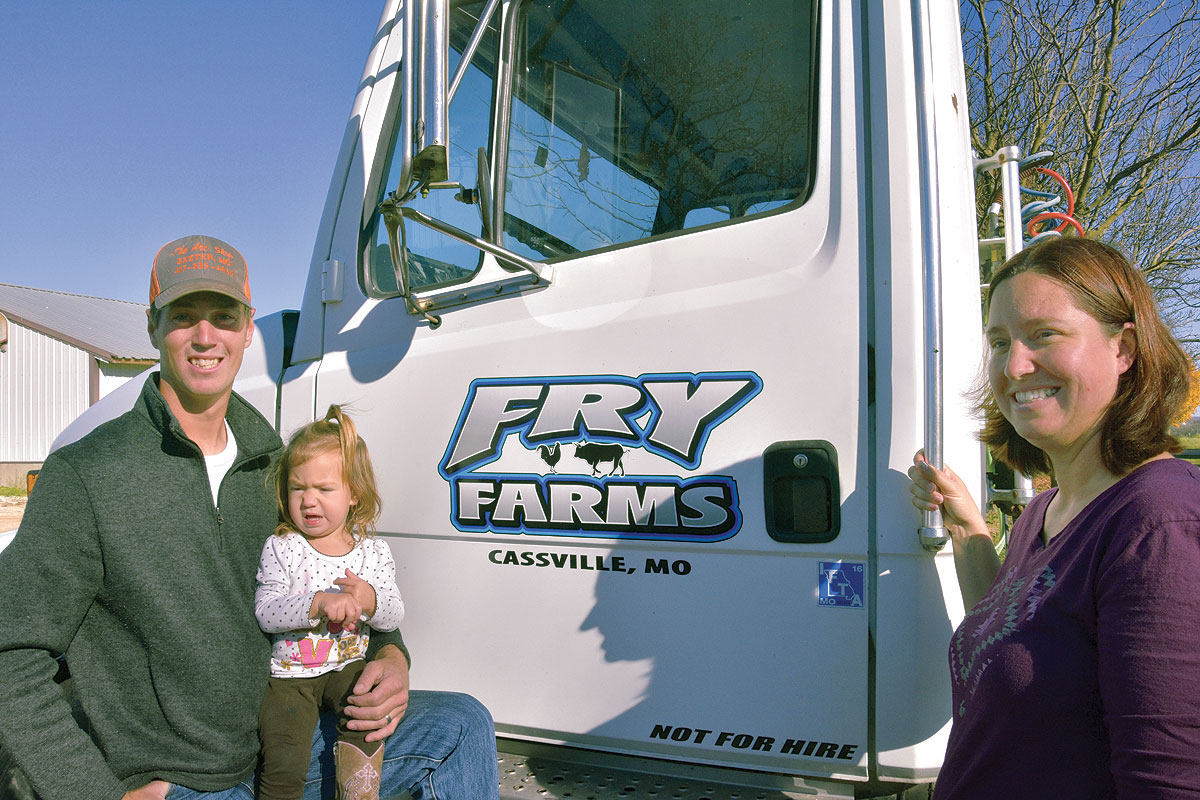 With a peak of 38,000 eggs per day from their laying hens, managing a herd of about 150 beef cattle, and cultivating and harvesting hay crops, Scott and Breanna Fry of Cassville, Mo., stay busy. Married for 14 years, the couple is also focused on raising three kids: Rebecca (11), Cole (8) and Kynlee (2).

The rural Barry County couple own and operate Fry Farms, which operates four laying houses for Tyson with 11,000 laying hens and 1,000 roosters in each barn. The farm is comprised of 600 acres of land, about 150 acres of which they own. In addition to running their own farm, they do custom hay baling for other farms in the area.

“We’re up before it gets light and out until sundown baling hay and cleaning  chicken houses. It’s really busy in the summer,” Scott said of the hectic schedule.

Both Scott and Breanna are originally from the Wheaton, Mo., area, and neither one grew up on large farms. However, they knew they wanted to have their own farm early in their relationship.

“When I was a kid, we just had a small farm  – my dad had maybe 30 cows, and Breanna’s dad had several cows when she was growing up,” Scott explained. “When I first got out of high school, I caught chickens and then ran a catch crew for Tyson. We knew we wanted to get started in chickens and now we’ve had them for almost 10 years.”

Fry Farms has also made a name for itself by offering custom baling services. That portion of their operation was inspired by the dry summer of 2012, when they didn’t have enough hay for their stock. The following year, the Frys, along with Scott’s dad, bought a baler, cutter and rake, as well as their first cab tractor. Soon, calls came in asking for hay baling help and a new venture was born.

“We bought the equipment from Donnie Spears – he had done some custom baling in the past, and his customers called us.” Scott said. “The first year, we put up 2,500 bales and the last couple of years, we’ve done about 6,000. Ever since 2012, we’ve had good rains so we’ve had a lot of hay to put up.”

“You really need good help to make this all work,” Scott said. The farm employs four full-time and several part-time workers in the laying houses and baling operations.

Scott’s experience supervising an eight-man catch crew at Tyson and building his own farm from scratch helped prepare him to manage his own employees and mentor future farmers. Most of his employees have been with him for the long term, including one who has nearly five years under his belt and may start his own farm someday.

Scott knows firsthand how important family support is and how difficult it can be to find financial backing.

“When we were younger, getting financing was a big challenge,” Scott said. “I tell my employees to help their folks out whenever they can and in turn they will probably help them get started.”

The couple’s plans for the future include expanding their cattle herd, which is currently comprised of several different crosses.

“Right now we have about 150 cows, and we would like to get up to 200 head and maybe play around with some feeder calves next year,” Scott said. “We’ll see how that goes – we are pretty content where we are at.”