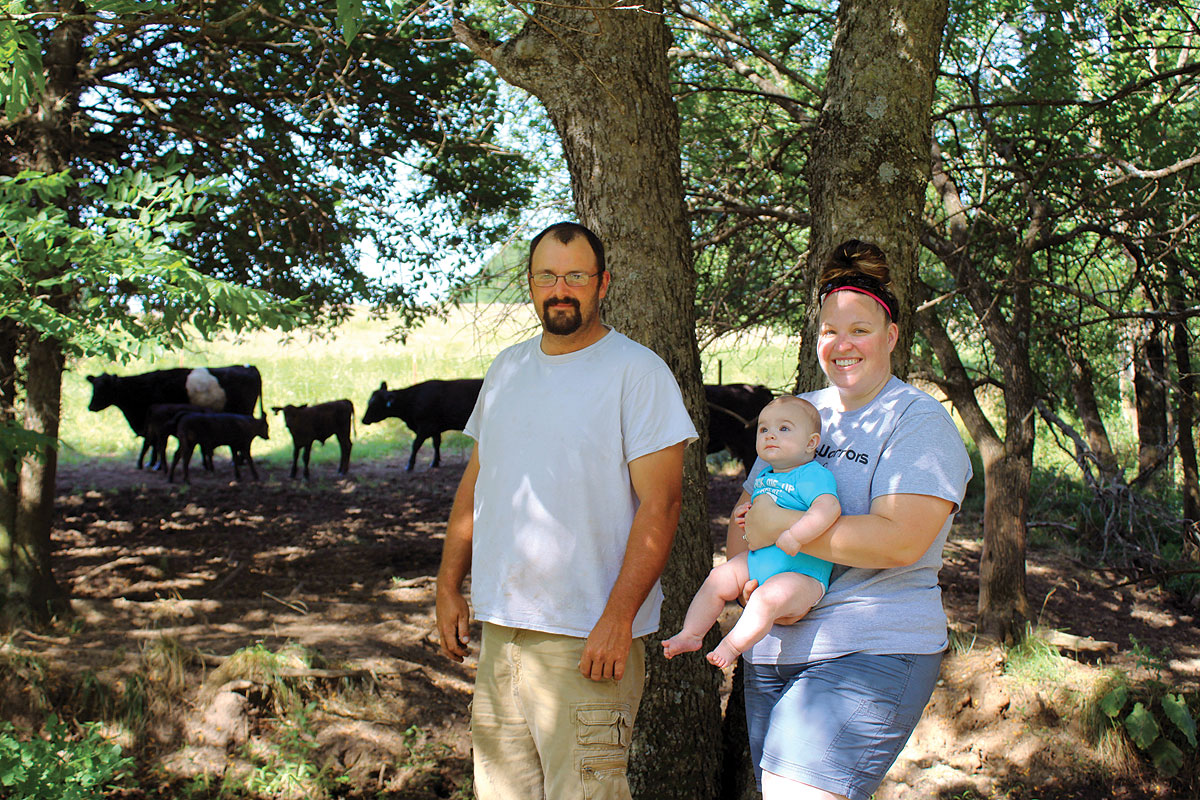 When Jason and Chelsea Parrott relocated to Stockton, Mo., they brought with them a non-traditional breed of cattle.

Jason, an upstate New York native, married Chelsea, who is from Iowa, and the couple moved to Cedar County in 2013 after Jason was offered a position as herdsman at Circle A Ranch, and Chelsea took a job with Pennington Seed as a crop adjuster.

Jason and Chelsea started their beef enterprise when they got engaged in 2012. Now, they have 11 head of Belted Galloway, American Aberdeen and South Devon cattle.

Jason’s interest in these breeds sparked when he worked for Uphill Farm, a Belted Galloway ranch in New York. He traveled to various livestock shows, fitting and showing cattle and grew to love the breed.

These breeds are often mistaken for miniatures, which is a misconception. An American Aberdeen cow will weigh on average 1,000 pounds. A 6-month-old calf will weigh approximately 400 pounds.

“The birthweights of the full bloods range from 30 to 50 pounds, and the half-bloods will range from 40 to 70 pounds,” Jason said.

The American Aberdeen, also known in Australia as a Lowline, are similar to the Angus cattle raised in the United States in the 1960s, Jason explained.

These smaller breeds make it possible for producers with a limited amount of acreage to increase their herd size.

“These smaller cattle do not eat as much. You can run more of these Aberdeen cattle on grass compared to big cattle. Even if you bred these to a larger Angus cow for a half-blood, you can still run more cows per acre than an 1,800-pound cow,” Jason explained.

“If we had the land, we could have been way bigger,” Chelsea commented, noting their herd size is capped at 11 until more land becomes available to them.

The South Devon breed has a registry association and EPDs, but the Belted Galloway and the American Aberdeen only have a registry. Jason believes if they do add the EPD component to the association, it will hurt the breed.

Jason artificially inseminates all of his cows to an Aberdeen bull for calving ease. Due to the lack of EPDs, Jason selects the semen based on phenotype and does the synchronizing and AI work himself. He also AIs for several clients throughout the state.

The Parrott’s appreciate the American Aberdeen breed for many reasons. Their docile temperament, feed efficiency and calving ease make these cattle excellent for families who work off the farm. So far, Jason said, these breeds have adapted well to the fescue pastures in Missouri.

Despite their stature, these breeds yield high marbling and excellent carcass traits. They recently slaughtered an Aberdeen-Galloway cross and a purebred Aberdeen. The taste and quality of the meat did not disappoint Jason, Chelsea or their customers.

“We slaughtered a few of them and the meat has just been tremendous. They say the American Aberdeen’s hanging weight percentage-wise is equivalent to an Angus, and their ribeyes are bigger,” Chelsea said.

Jason’s primary goal is to raise genetically superior cattle. He is always striving to improve feed efficiency and produce cattle that will stand up to the heat stress of Southwest Missouri.

Jason and Chelsea have one son, Kash, who they hope will share their love for cattle.

“I am really excited for him (Kash) because he will get to know what hard work is. We both work hard for what we want and have,” Chelsea said.

“Raising cattle is rewarding. Work hard for what you love and want,” Jason added.