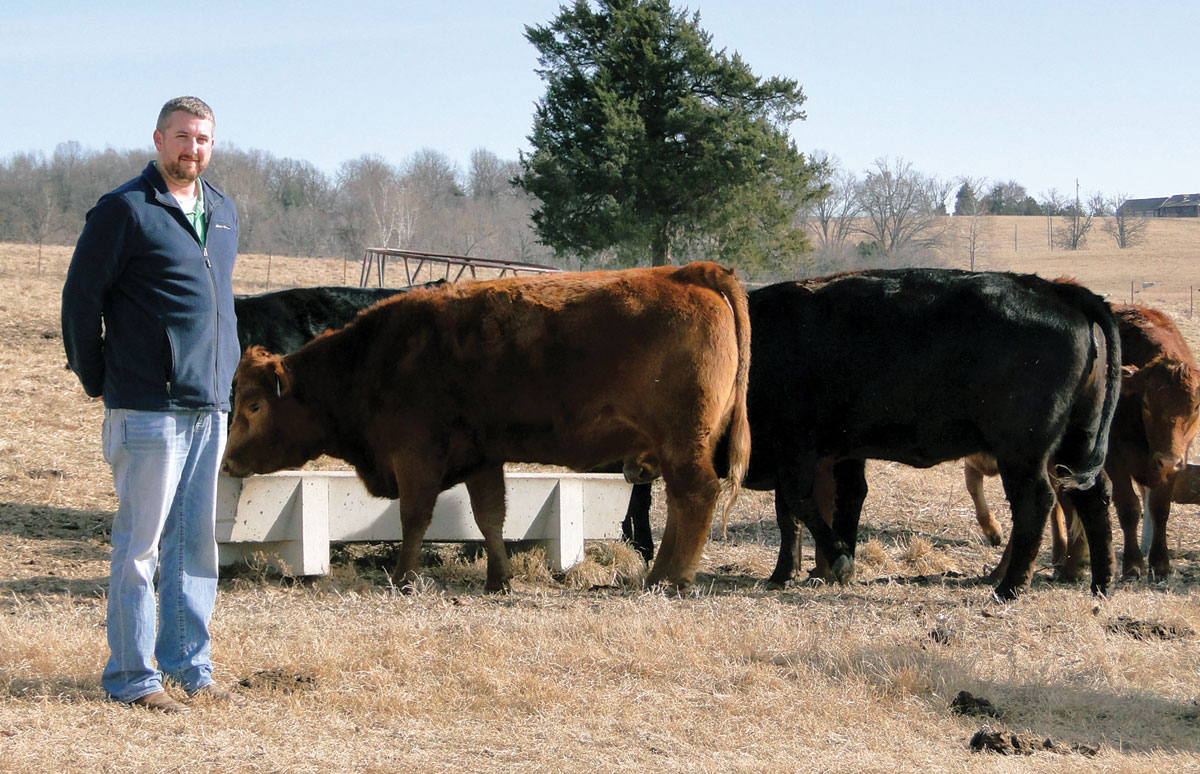 The couple met while attending North Arkansas College, with Neal finishing at Arkansas Tech where he earned a degree in agribusiness. While in school, Neal interned with the USDA, which hired him full-time immediately after graduation. Neal is now a loan specialist for commercial waste and water systems, which includes towns and cities. Rachel chose a different path and finished at Missouri State University with a degree in education. She then earned a master’s in education administration and is in her first year as assistant principal at Hollister Middle School in Missouri.

The Hodges’ breeding stock ranch is a family operation, shared with Neal’s mother Diana, who in addition to being a high school teacher is a full-time partner in the farm. Neal’s grandfather, Eugene, grew up in the area and selected the land because the soil was fertile with natural springs that are still viable today though supported by rural water and a few ponds. Eugene began with a registered Hereford herd after World War II and was joined by his son William after college graduation in the mid-1970s.

They decided to switch to registered Gelbvieh because of their maternal traits, longevity and good muscling.

Eleven years ago, William was in an accident and passed. Neal had shown livestock when he was young and immediately stepped up his participation in the ranch to help out. As his grandfather started slowing down seven years ago, he took over the books, paperwork and sale of the breeding stock

“We sell mostly by private treaty and must meet the needs of a variety of buyers,” Neal said. “We produce highly functional breeding animals with a variety of dominant traits to meet those needs. We are able to do so because we use AI and select semen with different dominant traits. The up-and-coming technology is DNA testing with genomic enhanced EPDs, which makes prediction about the characteristics of future calves even more accurate than traditional EPDs.”

Examples of the variety of available cattle at the Hodges ranch are heifer bulls, growth bulls and heifers that mature to efficient cows with a moderate frame. Attention to a variety pays off because repeat and word-of-mouth buyers dominate their customer base.

One factor that contributes to the herd’s success and efficiency is rigorous culling criteria which include culling mommas who do not breed back on time, do not produce a weaning calf of acceptable weight and/or do not exhibit a gentle and cooperative temperament. The ranch typically retains 20 heifers annually as replacements. Bull calves are culled if their appearance is off or if they have a heavy birth weight, which might pass on to the calves they sire.

“Efficient mommas are essential and save time, labor and money,” Neal explained. “The last thing I have time for is pulling calves or hunting down escaped cattle, and the tendency to escape is a significant indicator of a troublesome disposition. Old people or children can be around our cattle, and buyers don’t have to worry about them getting away.”

Another of Neal’s contributions to herd’s success is the addition of Balancer bloodlines. Balancers are a Gelbvieh/Angus cross and an official breed. The cross produces hybrid vigor and additional marbling. Twenty-five percent of the Hodges herd are registered Balancers, which helps provide even more options for perspective buyers, most of whom are commercial breeders.

The ranch has both spring and fall calving seasons, with heifers and bulls separated at 5 months of age to prevent early pregnancies since Gelbviehs reach puberty early. The herd is vaccinated twice per year, and long-term injectable dewormers are administered once a year. He also uses a pour-on wormer once a year. Neal believes the combination works well with one catching what the other might miss, though both do a good job. Calves also receive Multimin 90 vitamins shots to ensure balanced nutrition.

The feeding program is carefully planned. Cows and herd bulls graze and eat hay mixed with Mix 30 liquid cattle feed. Because the bulls are used with only small groups, they don’t need extra graining or other specialized breeding recovery procedures. During the winter, heifers receive 15 percent protein once a day to support grass and hay. Bull calves, on the other hand, receive 20 percent protein grain year-round to maintain steady growth.

Because the farmstead is older, Neal feels maintenance and time are his biggest challenges. Some fences date back to the original land purchase and others need repair. In addition, some of the working pens around the farm are outdated and inconvenient. These issues will be dealt with as time allows though Neal hopes someday to retire and ranch full-time. In the foreseeable future, however, his highest priority is to continue to improve genetics so the ranch can have its own production sale.

Something that Neal and Rachel cherish is the opportunity to raise their children in an agricultural environment. Cambree aged eight, Lily aged five and Weston who is three all love riding around to check the cows.

“Of course, Weston always wants to be in the tractor with me when I put out hay,” Neal said with a chuckle.