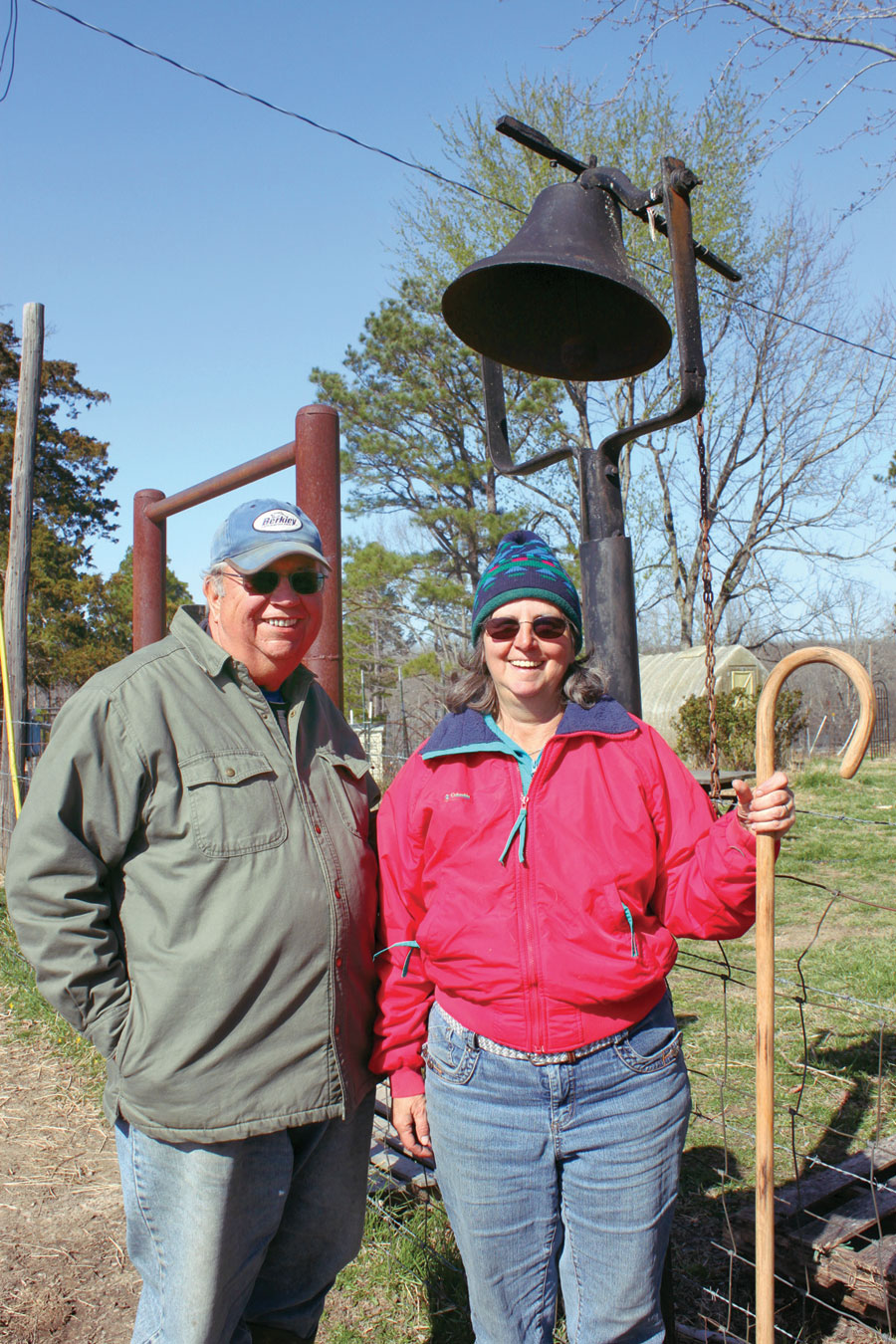 Al and Kirsten Kosinski of Black Bell Acres in rural Alton, Mo., are retired and living their dream in the hills of the Ozarks.

“We moved here from Michigan because we wanted to get away from the cold and it is just beautiful here,” explained Kirsten. “We visited friends in the Ozarks in the Fall of 2004 and fell in love with it.”

They purchased 67 acres and moved their Michigan animals to Missouri. “We brought our two draft horses, four goats, rabbits, ducks and moved to expand our farm,” said Al. “When we first got to Missouri we began raising meat goats but have transitioned to sheep.”

The Kosinskis raise animals primarily for their own use and enjoyment.

“We raise sheep for the meat,” explained Kirsten. She is originally from Germany and enjoys lamb, goose and duck. “Those meats are not easily found in this region… We were told that sheep wouldn’t survived in this area, but we began to see sheep in the Ozarks and decided to get one bred ewe.”

They purchased one crossbred ewe and she delivered twins that year. They rebred her each year and she produced many lambs for them at Black Bell Acres.

“She just recently died of natural causes here on our farm,” Kirsten added. “One of her daughters even gave us quads one year,” added Al.

“They are meat breeds and hair sheep, and they are easy keeping,” Kirsten said. “Compared to our goats, we don’t have to trim hooves and we deworm our sheep very little.”

“Also, because they are hair sheep, we don’t have to shear them either,” added Al.

“As we bought more and more ewes we began cutting down on our goats until we sold them all,” Al added.

“We just sold about 20 ewes and two rams because of this crazy weather we are still having to feed hay, so we cut back on some of our numbers,” Kirsten said. “We keep some of our ewes back each year and buy replacement rams to bring in new bloodlines.

“We breed our sheep to be hearty and for color. This is a retirement farm for us, so we want to have fun with all the colors we can have with the sheep,” Kirsten reasoned.

In the past the ewes have lambed in the fall and spring.

“We raised some lambs for Easter the past few years, but that means you have kids during the cold, cold weather, so we are planning to transition all our ewes to lamb in the spring,” explained Kirsten. “It seems to be colder now than when we moved down here 13 years ago, so we are making some adjustments.

“We try to raise our sheep as organically and naturally as possible. We don’t use vaccinations and medicines unless we really need to and so far, we’ve done okay. We see the animals daily and our biggest loss has been to predators such as coyotes or dogs.”

They have two Anatolian dogs who serve as guard dogs for the property. “Duke, our male, is a great dog and completely different in the daytime,” Kirsten said. “He protects the property well during the night and we’ve had less issues with coyotes.”

“We also just got two llamas as sheep guardians. “We had one in the past who would stay with the sheep and even herd them in when they came to the barn. Now that we have a breeding pair we hope to breed one that we can raise with the sheep. The new pair doesn’t seem to want anything to do with the sheep,” Al chuckled.

Black Bell Acres raise a diversity of animals in conjunction with the sheep. “We wanted to raise something unique and learned about Highland cattle,” explained Al. They now have nine head of Highland Cattle, two draft horses, one American Quarter Horse, three geese, three ducks, four rabbits and three dogs.

Black Bell Acres got its name from a family treasure that moved with Al and Kirsten from Michigan.

“The manufacturer’s name on the bell is from the mid-1800s, so we don’t know how old the bell really is, but we are proud to have it on our farm. We even use it now to bring the sheep to the barn,” he smiled.

The Kosinski’s admit they don’t have a traditional farm here in the Ozarks, but they love what they have.

“We started this later in life, after we retired,” Al explained, “but we agree that it is better late than never.

“We are still growing and learning here on our farm and love the peaceful lifestyle it allows us,” Kirsten added. “We like the uniqueness of the animals we have raised and are raising and may even look into more unique livestock,” she said. “Kunekune pigs are something I’ve been looking at. They are small stature, grass grazing pigs. Seriously, look it up,” she chuckled.

When is the Time Right?