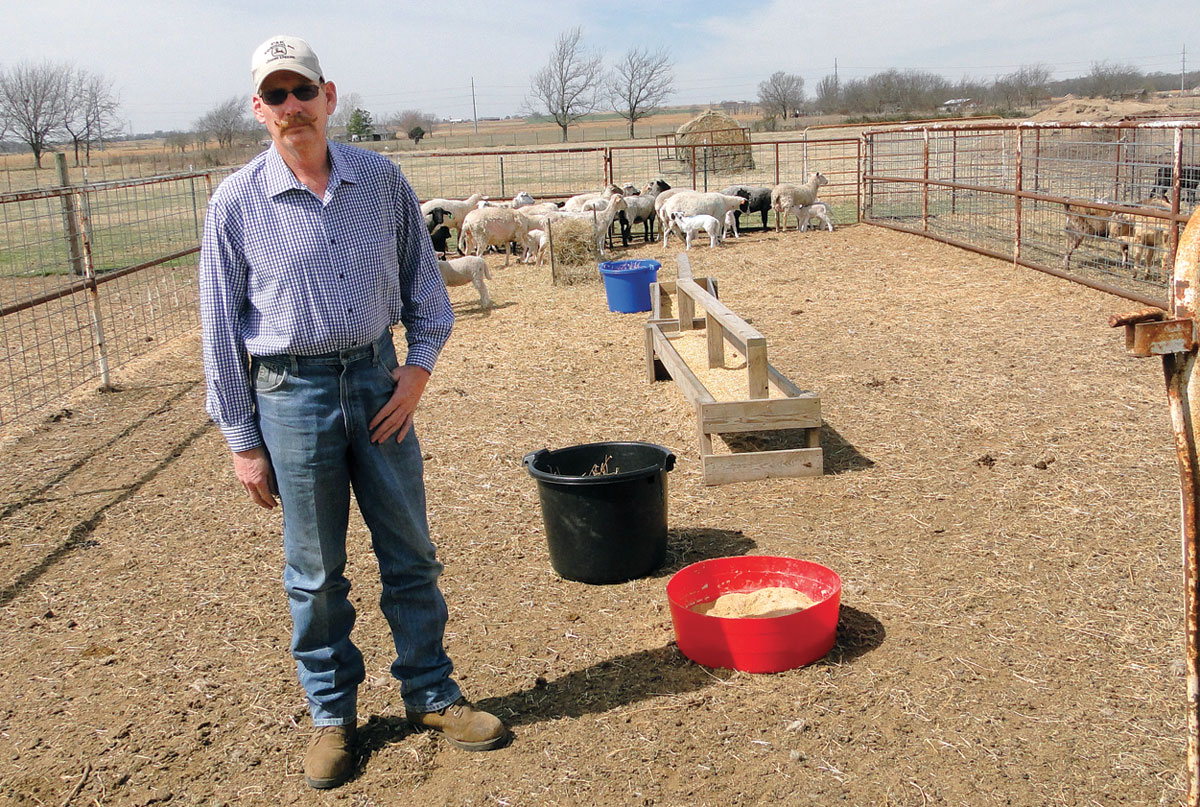 Larry Searles grew up in Wann, Oklahoma, graduated from Lenapah High School and later from Oklahoma State with a degree in agriculture education.

Larry’s father Clyde had 90 acres and ran a few cows and up to 300 wool sheep while also working at a foundry. His mother Joanne taught school. Larry was active in both 4-H and FFA and showed sheep and hogs.

Larry followed in his father’s footsteps, but traded the foundry for auctioneering and wool sheep for the currently more popular hair sheep.

Another difference is that Larry runs a stocker operation on 50 acres in Chouteau, Okla., rather than a breeding herd.

“A number of years ago I seriously injured my shoulder when a horse fell on me,” Larry said. “I decided to increase my auctioneering and transition to hair sheep since the shearing is so much less.”

One similarity between Larry and his father is that Larry’s three children – Lakin, Lexi and Brody – also showed hogs and sheep at the local county and state fairs. Further, grandsons Edward (5) and Eli (2) each already have a set a sheep with the youngest, John, only 3 months old, probably soon to follow their lead. In addition, Larry’s wife Brenda works off the farm just as his mother did, but is an import specialist for Zebco rather than a teacher.

“I look for health around the face and eyes, and want to make sure they are not too thin or too weak. I don’t want much of a death lost so I don’t take that much of a gamble,” explained Larry.

Last year, Larry sold 150 ewes ranging from 1 to 5 years old that were then bred to Dorper bucks. Larry prefers the Dorpor breed for breeding because the breed is muscular and grows faster. The ewes are sold with lambs at side or as bred ewes, which is verified by an ultrasound test. He also sold 450 fat lambs. Feeder lambs are purchased at 30 to 60 pounds and sold fat at 60 to 90 pounds, depending upon the initial weight. Larry typically puts at least 30 pounds on each lamb, depending upon the market and the ebb and flow caused by holidays.

Larry’s business revolves around the holidays of Ramadan, Thanksgiving, Christmas and Easter. This means lambs must be purchased at specific times so they are finished for each of those holidays. In addition, customers have different preferences, especially in terms of size depending upon the holiday. For example, bigger ram lambs are the preference for Ramadan while smaller lambs of either sex are preferred for Easter and Christmas.

Contrary to popular belief, hair sheep are sheared. Larry shears most of his sheep, especially before Ramadan, so they are smooth and buyers can judge the quality of the animal.

“In my heyday, I could shear 100 to 125 sheep per day, five days a week. It is physically exhausting, but, in spite of my shoulder injury, I can still outwork many young people.”

Larry went on to explain that he used to use a shearing machine but replacing it is not cost-efficient since he doesn’t shear that much anymore. Now he uses three sets of Shear Masters instead.

Larry believes the biggest challenge in raising sheep is health issues caused by weather changes. Though summer parasites are always an issue, issues also arise from cold, wet weather like the 8 to 9 inches of rain that fell in three days in late February. He had bought some wool lambs called old crops, lambs that are older. He later sheared them and discovered they were doing well, but, according to Larry, the heavy rain in February will prevent normal weight gain for three weeks so they won’t be ready in time.

Another recent issue occurred when an insufficient number of lambs was available a few months ago. Even though Larry had “tinkered” with goats before, he decided to buy 50 goats as a new operation for him. He prefers sheep because they take only 60 to 75 days to fatten while goats take 75 to 100 days. Although goats eat less of the cottonseed and corn ration Larry uses, he makes more money by the quicker turnaround of the sheep. The more lots he can sell in a year, the more money he makes.

Sheep and goats also require slightly different care. Three differences are particularly important. One is that they require different black leg vaccines with the goats needing Covexin 8 while the sheep can use the more standard Bar-Vac 7, which can also be used for cattle. The second difference is that Larry castrates billies because of temperament issues while sheep need to remain intact because some customers use all parts. Finally, goats need to be in a dry lot because fresh grass makes them wormy. Consequently and in addition to the same ration, the goats have free choice Bermuda hay supplemented by a half pound of alfalfa while the sheep can be turned in with the cows in pastures with abundant lespedeza and clover.

He fertilizes pastures with 30-11-11 fertilizer and uses as much as his predetermined budget allows. Because his pastures are well-established with few weeds and because he wants to preserve the Lespedeza and clover, he only spot sprays for the occasional thistle.

Predators, mostly coyotes, can be a problem so he maintains guard dogs: four Great Pyrenees/Anatolians. He has ordered an additional pair of Great Pyrenees/Anatolians and is paying a premium to have them partially trained by 7 months of age so they will know enough to leave lambs alone. Another predator deterrence is the use of panels rather than wire fencing.

Brenda and Larry have created a magical place for their rurally-raised family. One of the delights for the grandchildren are the variety of fowl: geese, ducks, chickens, guineas and a few turkeys. As if working off the farm, running the goat and sheep business and taking care of the birds isn’t an enough, this spring the couple will breed their 18 black Angus-cross females to Larry’s Angus bull or to another Angus bull in which he has half interest. 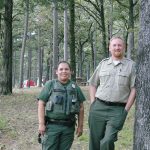 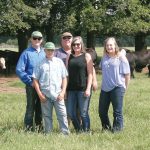 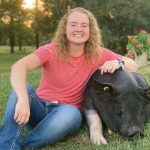