Raised on the Land 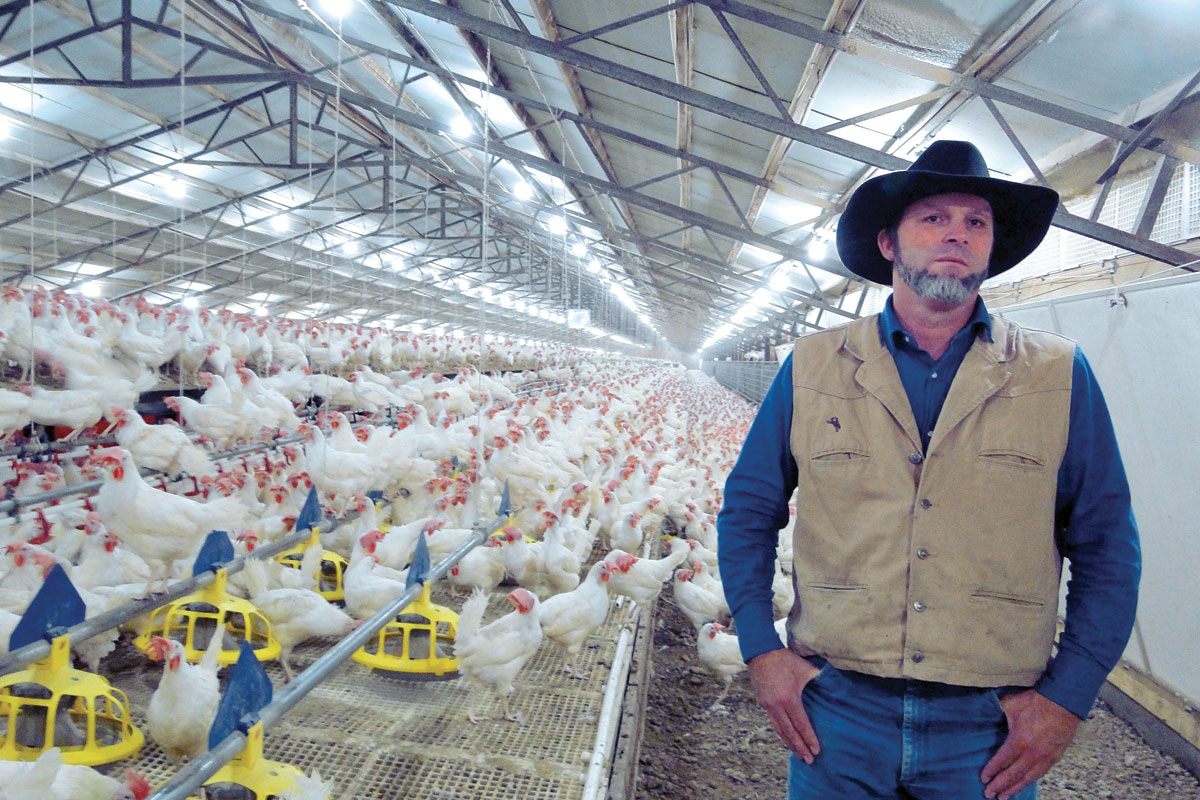 John Kropf and his family have both turkey and cattle operations in Johnson County, Ark.

John Kropf of Clarksville, Ark., had exposure to numerous agricultural activities before he and his wife Clarabel purchased a turkey farm.

The operation is now a family business with 1,400 owned and leased acres managed by John and his son Tony, with another son, Scott, who own his own cleanout business, helping as needed. Another change since the purchase is that the farm now has an egg laying operation, which includes raising their own hens from chicks. They also have two cattle herds.

John was raised in Mena, Ark., with his introduction to agriculture beginning on his father’s broiler/cattle farm at a very early age. He remembers driving a pickup through the snow in 1974 when he was 6. His father was in the back throwing out square bales for cows.

“Suddenly the truck spun out of control on the slippery snow,” John explained. “I hung on desperately and my dad did too. As soon as the truck straightened out, we simply kept working.”

John worked on a hog and cattle farm when he was 18, then for an uncle who owned K and K Construction and built poultry houses. Then John started a litter cleanout business lasting 20 years. He also married Clarabel and now has three sons, five daughters and three grandchildren.

In 2002, the couple bought a turkey farm while John continued cleaning out houses until 2014. Soon thereafter, the couple started a cage-free laying hen operation and sold to Midstate Specialty Eggs.

“The egg laying operation proved profitable because I raised my own replacement hens, and because I was independent and could choose which upgrades would benefit my particular operation. I did not have to comply with mandated improvements decided by a big corporation that also keeps producers financially obligated.”

John has 11 cage-free houses: six for layers and five for poults with each poult house for poults at different stages of development. When the poults are 16 weeks old, they are moved to the laying houses where they remain until 80 weeks of age before being replaced by younger, more productive hens with the retired hens being sold for further use. Egg production starts slowly and peaks at 95 percent with retirement occurring when house level drops to a percentage in the mid to low 80s.

Brown and white day-old chicks are trucked to the farm and usually purchased from Hy-Line International. The poult house has already been thoroughly cleaned with water pipes flushed and equipment lowered. The brooding area is cordoned off with four, 40-foot sections of tube heating running down the center of the house and radiating heat to a 40-foot wide area. The system is kept for approximately four weeks, depending upon the time of year and weather when the young birds are turned out into the whole house with each house holding 20,000 poults.

The farm has a total of 94,000 laying hens at a time. A scratch area in the middle of each house are bounded by training wires used to help the young hens learn to jump to the slats where feed, water and nests are located. When the hens lay an egg, that egg is gravity fed to a conveyor belt that delivers the eggs to the collection areas. Because these eggs are for table use, no roosters are mixed with the hens.

Since John is not affiliated with a corporation, he buys his own feed, which is custom mixed at Etna Valley Feed. Each formula is dependent upon bird maturation level and advice from a recommended nutritionist in California.

John uses rice hauls because of cost and availability though he prefers pine shavings, which have a cleaner smell. As of now, the operation doesn’t have a set pattern of usage with John feeling that price is always an important consideration in agriculture.

Many farms raise both chickens and cattle because the chickens provide fertilizer for pastures. With 1,400 acres, the Kropfs use all of their litter according to their NRCS plan.

The Kropfs have a combined cattle herd total of 400 mommas and 14 bulls. F1 females make prime commercial breeding mommas, with Tigerstriped cattle being the Kropf preference because of heartiness and production longevity. The breeding herd to produce those FL females consists of 150 Hereford mommas bred by Brahman bulls. Bull calves are castrated, raised and sold. The 250-head momma cow commercial herd is bred by Balancers to produce more red calves from Charolais-influenced mommas and by Angus bulls to produce black with white faced calves from Hereford-influenced mommas. Calves are sold at auction at 600 pounds, while breeding females are sold by private treaty.

John strives to control three common herd issues. He combats flies through a combination of injection, pour on and rub to prevent resistance and handles pinkeye through vaccinations. Interestingly, the F1s have virtually no pinkeye issues while the Hereford’s are prone to the problem. Birthweight is managed through genetics. The water quality question is solved by John using rural water because he believes chlorine is less an issue than the iron in his natural sources.

Believing in self-sufficiency, John and his sons raise hay and have a 300-acre hayfield comprised of rye, clover, Bermuda and Johnsongrass. That field typically produces 2,700 silage-wrapped bales a year.

“I was raised on the land and love providing the same lifestyle for my family. Each farmstead is different, and I am constantly seeking what works best for us,” John said.