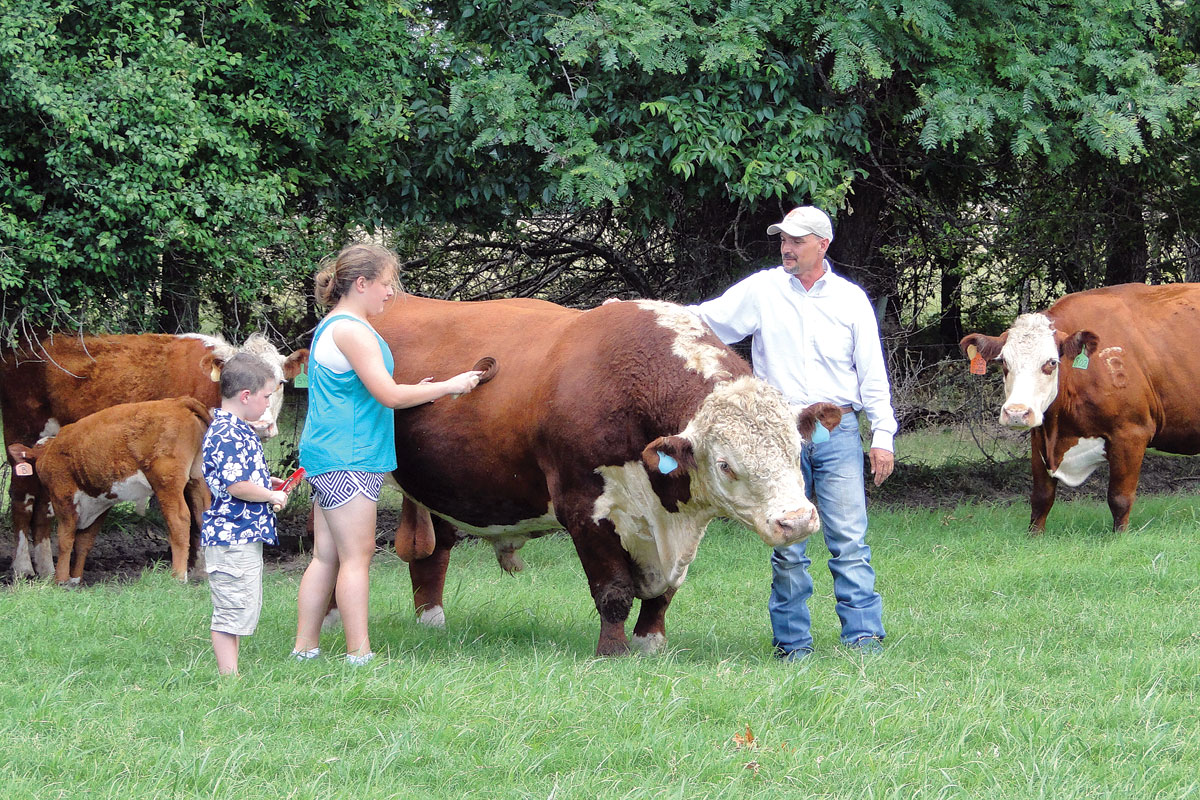 Matt and Erica Boyer are the fifth generation to live on a 350 family-owned acres near Langley, Okla.

The land was first acquired by Missourians John and Gertrude Millikan in 1905, two years before Oklahoma statehood. John made his living digging wells for settlers as they moved west, and the ranch’s original well house and cellar are preserved in their honor. Today the ranch is named Beacon Hill Ranch after a nearby hill which was topped with a beacon to help train pilots during World War II.

Both Matt and Erica work full-time off the ranch in demanding, time-consuming positions that necessitate fine tuning time management. Erica is a full-time surgical nurse at Hillcrest Hospital/Claremore and  Matt is a 12-month contract ag instructor and FFA advisor for Claremore High School in a two-teacher program.

“Our chapter is like many with more girls than boys and few coming from traditional agricultural backgrounds,” Matt explained. “The program is important because it familiarizes students with agriculture as the population moves further and further away from it.”

To maximize student participation, many students are members of judging teams. Another important participation feature is a greenhouse that includes hydroponic plants with fertilizer being supplied by fish waste from their aquaculture program.

Erica’s father, Richard Gebhart, was instrumental in developing Matt’s cattle skills. One of the most important things he ever told Matt was “You can’t manage what you don’t measure.”

When Erica’s father unexpectedly passed away, the couple stepped up and took charge of her family’s ranch.

Since the ranch’s beginning, Erica’s family has raised Herefords because of their docility, hardiness and good maternal traits. The herd now consists of 100 registered Hereford mommas mostly bred by artificial Insemination (AI), with home-raised bulls, Bob and Bigly, serving as cleanup bulls for those cows who are not pregnant after one AI. Embryo Transfer (ET) is used to raise breeding and show prospects for the herd and their 10-year-old daughter McKenzie and 5-year-old son, as well as show quality buyers.

“The only way we can balance our off-the-farm jobs and the herd is to synchronize breeding to optimize our breeding schedule and conception rate,” said Matt.

Erica matches each cow with semen from one of many AI sires available in order to produce the most productive and genetically valuable calf. Although first-calf heifers are matched with AI sires selected primarily based on the bull’s birth weight and calving ease EPDs. Erica is also in charge of herd health including administering vaccinations, parasite control and other preventive health measures. In addition, Dr. Clint Gardner from Pryor, Okla., is always available for consultation on herd health planning.

The herd is fairly evenly divided into fall and spring breeding seasons. Heifers and bull calves are weaned at 7 to 9 months, depending upon grass and weather.

Matt also appreciates his drone, which he uses during calving season to check the cows. According to Matt, if he drives his pickup to check, he disturbs the animals that are conditioned to the sound of the truck meaning dinner-time. The drone does not focus their attention and the herd remains at ease, a distinct advantage during calving season. Finally, Matt uses annual soil testing and GPS technology for spring fertilizing because the process is more precise and economical and because GPS extends day usage since application can be done at night.

Matt and Erica retain half of their heifers as replacements and also sell replacement heifers, both open and bred. They sometimes offer young breeding bulls, but lack the necessary facilities to safely raise more than a couple of bulls at a time to maturity. Because of the age of the farm and improvements in technology, facility improvement is a never-ending process with upgrading fencing and working facilities on the list.

Another aspect demonstrating an awareness of safety, is cow-culling criteria. The highest criteria is temperament meaning the Boyers won’t tolerate any “high-headed” cows. Cows are also culled if they are not “easy doers,” which means independent with minimal calf-pulling and weaning trouble-free calves. Every cow must produce and raise a healthy calf each year or she is culled.

For the last four or five years, the ranch has also offered custom fed beef from their steers. The resulting market weight steers are sold based on live weight on harvest day. The couple has found that consumers increasingly want to know where their food comes from and order a season ahead of time.

While the Boyers have improved pastures with a mixture of Bermuda and fescue, their hayfield is native grasses, which provides good roughage and dry matter but insufficient protein. Consequently, they use 38 percent protein feed in winter adding molasses-based protein supplements as needed.

McKenzie and Gus are looking forward to showing again this year, with McKenzie having shown for the last five years. Though she usually shows heifers raised on the ranch, this year she is showing a “fuzzy, cute black steer” named Harry Potter that her mother found. Gus, on the other hand, is showing a home-raised a miniature Hereford, perfect for his size and age.

Matt and Erica have clear goals. They want to be excellent stewards of the family land and want to provide their children with an opportunity to preserve that family tradition if they choose to.