Fresh From the Farm 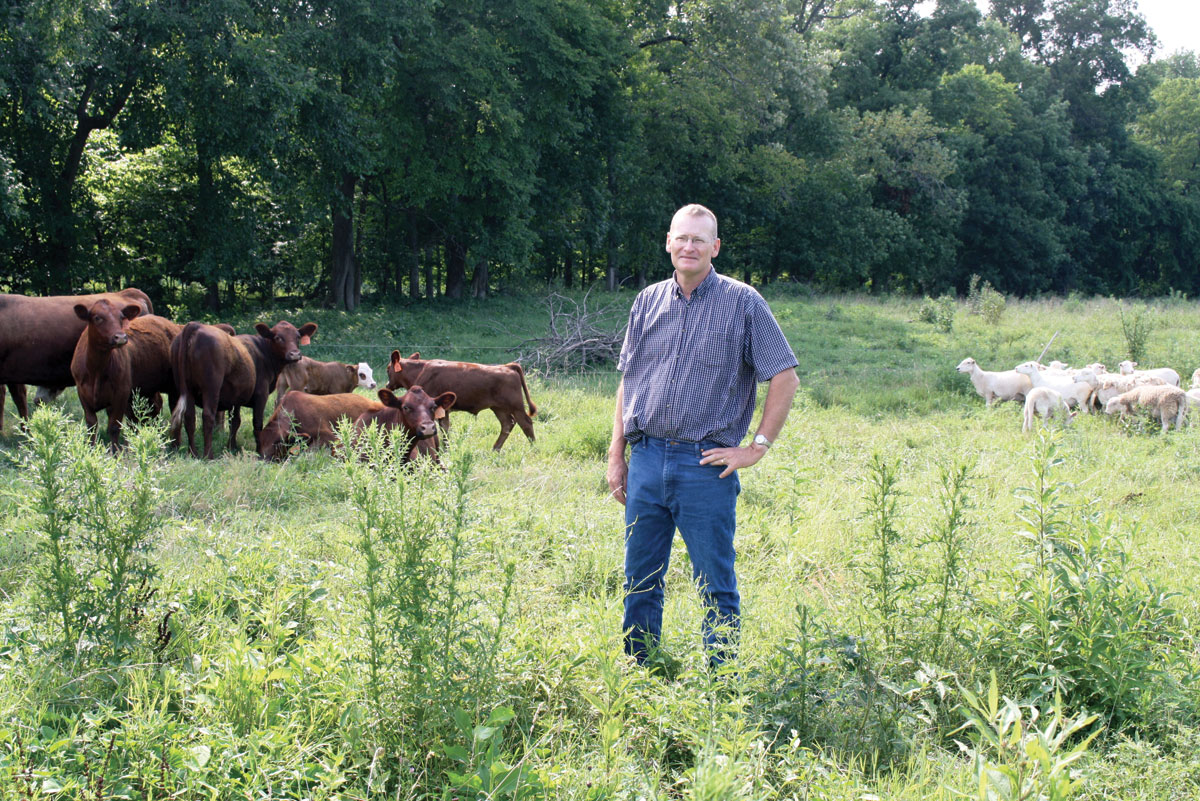 The Meusch family markets a variety of meat and other products from their Rolla, Mo., farm

After a career in the fisheries industry in Southeast Asia, Eric Meusch and his wife, Pathoumma, decided it was time to come home.

They purchased a rugged 240-acre farm near Rolla, Mo., that had been untouched for three decades. By 2010, they – along with their sons David and Owen – were making their home at Meusch Farm, LLC.

Meusch Farms is a multi-species livestock operation, specializing in grass-fed and finished beef, as well as pasture-raised eggs and chicken, and locally-produced lamb and pork. Additionally, the family also has a sizable produce operation.

“What we do is direct market everything we do on the farm as food in the community,” Eric explained. “Almost everything we do is something we would be doing for ourselves anyway; as long as you have them, you might as well market them.”

The couple did have some farming experience before starting their own operation, but it was limited. Eric was raised in the Rolla area and worked on farms as a teen, and his grandparents also had farms. Pathoumma, a native of Laos, grew up in a rural area of the country, where people were self-sufficient.

“We always had a garden, chickens, turkey, ducks and pigs… We didn’t have a supermarket,” she said.

Raising cattle was a new enterprise for the family, and they admit there were a few bumps in the road.

“We started off with stocker cattle,” Eric said. “That was a disaster for a lot of reasons. We weren’t set up very well and we knew cattle ate grass and that grass grows. We got some wild cattle and we couldn’t get them out of the brush to save our lives.”

They eventually converted to a cow/calf operation, and have about 20 momma cows, with the majority being spring calving. In all, the Meuschs average between 50 and 60 head of cattle and have implemented a rotational grazing system, utilizing cost-share funding from the Natural Resource Conservation Service and the Missouri Department of Conservation. They now have about 100 grazable acres, with plans for additional clearing.

“We always wanted to do the grass-fed beef and would cut some calves back for ourselves and neighbors, but then we got a set of heifers and a bull and focused more on it. We started out with a lot of Hereford, Charolais/cross and an occasional Red Angus. I’ve been using red bulls and I really like the red cattle.”

While her first experience with cattle wasn’t exactly ideal, Pathoumma was a willing partner. She used money from her produce sales to purchase their first bull, a South Poll. She laughed and said she paid the breeder with $5 and $10 bills.

They have now ventured into Red Angus bulls.

“I think there’s more consistency in the calves,” Eric said. “South Polls are smaller framed and we got some really, really small calves out of him. Our carcass weights are still a little lighter than I would like them to be, so we’re trying to frame them up with that Red Angus. Our beef is a long-term investment because it takes two years to finish. To get that 60 days of good growth before you harvest them, May and June grass is our shot.”

Steers not sold to customers as grass-finished are sold at a local livestock market.

In an effort to diversify income, the Meuschs introduced Katahdin sheep and Boer goats into their livestock operation.

“We butcher a few lambs to have available at the farmer’s market, but they want the choice cuts – the leg of lamb, the rack and chops. There’s really not much to a lamb, but some will buy a lamb to butcher themselves or to have it process somewhere,” he said. “There’s a really good market for them through the sale barns. We sell more lambs and goats through the sale barn than we do our other animals.”

While not a large part of the operation, the sheep and goats are helping to reduce brush in areas that were overgrown.

“We do see a difference in the fields,” Eric said, adding that the sheep and goats are offered commercial feed in the evening to keep them coming into a pasture close to the house, which also aids in predator control. “I really like the sheep because they are a little easier to work with and don’t seem as needy as the goats. We’ve got 40 ewes and 20 does, and we really don’t have to put a lot of management into them. We use high-tinsel wire for the cattle, but the sheep and goats can pretty much go where they want and they graze in a big loop.”

The family began their swine operation when David and Owen wanted to show market hogs at their local fair with 4-H.

“Then we raised one for ourselves, then raised one for friends, then we kept a sow, then a few more sows and then got way too many feeder pigs,” Eric said with a laugh.

The boys still show market hogs, but the family has backed the production down to a single crossbred sow and boar, which produce two litters a year.

Hogs are marketed locally and are fed a locally-produced commercial ration.

“We’re not non-GMO or anything like that,” Eric said. “We have a good premix with no medications.”

All animals at Meusch Farm are routinely vaccinated; and dewormed as needed.

“We market our animals as farm-fresh,” Eric explained. “We like to say that we’re certified by our customers. We want our customers to ask us questions about how their meat was raised and what they ate; that’s our story. What we tell our customers is that we treat our animals like our kids, and if we have to use an antibiotic because one got pink eye, we tell the customer who buys into that animal and people are happy with that; people either trust you or they don’t, and we have some great customers.”

« Cattle and Hay by the Numbers
Safely Grazing Johnsongrass »