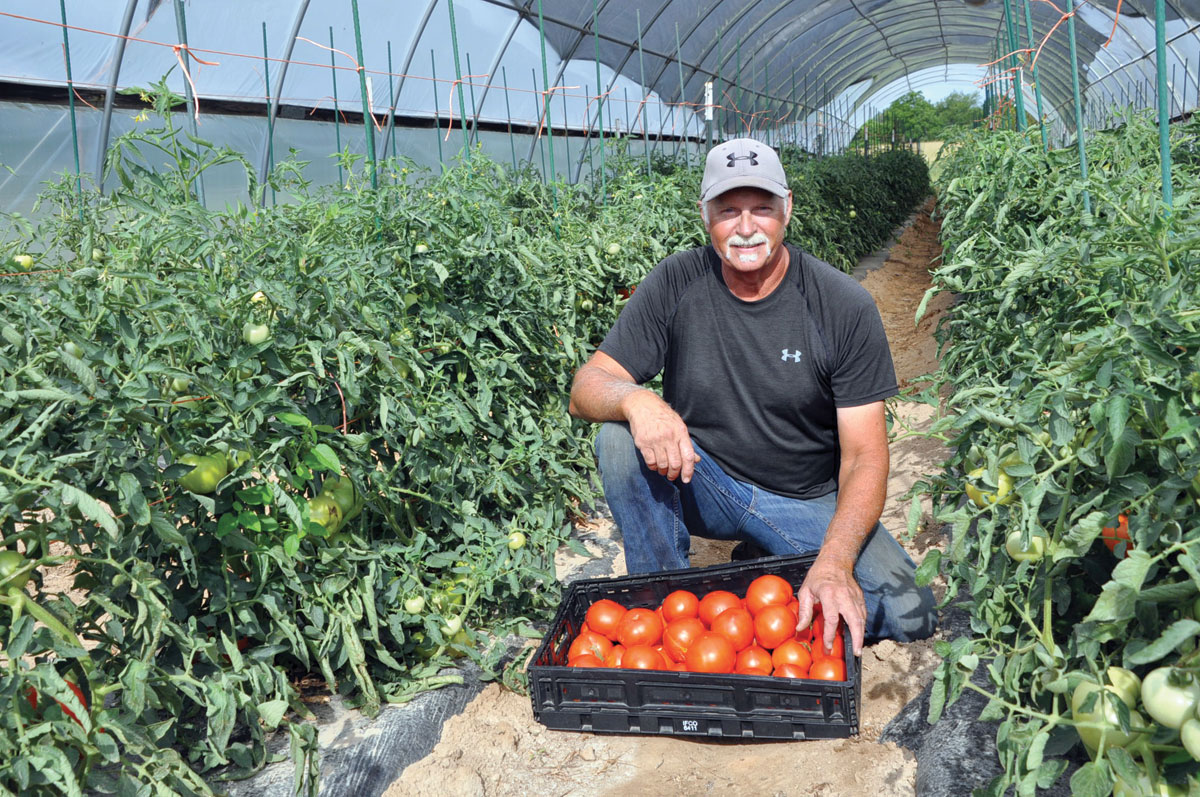 Pickers are at work by 6 a.m., plucking cucumbers, squash, zucchini, tomatoes and other vegetables for sale Tuesday, Thursday and Saturday at the Greater Springfield Farmers’ Market.

Mike Campbell is a one-man show except for two part-time employees and seasonal workers. Though not born a farmer, he worked on farms near his hometown of Carrolton, Mo. In 1989, he bought a farm with a century-old farmhouse that was once part of a large property homesteaded in 1846. In 1996, he became a full-time farmer.

He still is and is proud of the fact his farm put two daughters through nursing and medical schools.

“This is my regular job. I don’t have a second one. I raised my kids on this. It wasn’t easy, and not too many people who farm can say that farming is all they do,” he said.

In addition to its bountiful produce, Campbell’s Farm is well known for its corn maze, pumpkin patch and other family-oriented fall entertainment. In June, Mike plants 30 rows of pumpkins that, come October, will be ready for families to pick. The corn maze and pumpkin patch cover about 10 acres. Even in summer, people are making reservations for the fall events, which also include karaoke, magic shows, bonfires and hayrides.

But now in the height of summer, Mike is focused on his produce.

He sells at the Greater Springfield Farmers’ Market because it’s a growers’ market.

“We inspect everything our growers do, and then they can only bring the produce to the market that we inspected and that they grow. Our customers want to actually talk to the people who do the growing,” he explained.

And Mike will talk to anyone, customer or not, about growing food. He’s committed to sustainable small family farms, which sadly have largely been replaced by big corporate farms that grow the vast majority of the fruits and vegetables Americans consume. In contrast, the produce at farmers’ markets may seem expensive – until you realize all the work that goes into growing it.

“We are actually losing the small family farm,” he said, pointing to another problem: parcels of 10 and 20 acres bought by families moving to the country with no plans to keep those acres in production. “The land gets to be so expensive that we can’t afford to grow food on it. What will it be like when we have 360 million people to feed in this country?”

While Mike doesn’t claim to grow organic, he does claim to grow good food. “I’m in this to sustain my farm. If I have a crop being destroyed I’m going to take care of it and spray,” he said.

With only a few helping hands, Mike has used technology to his benefit. “I like to try things, test things, find more efficient ways to do things,” he said. He’s gone from growing in tilled fields to growing in plastic. Plants thrive under plastic, he points out, producing fruit about 10 days faster.

Mike also has one high tunnel for tomatoes and another in process.”The Natural Conservation Resources Service offers financing for high tunnels as a means of controlling soil erosion,” he said.

He happily invests in machinery to lighten the load, including a mulch layer, tiller, rock picker, water wheel planter, plastic lifter, tractors and a machine that in one pass lays a low-flow drip tape for water and fertilizer and the plastic that covers it. He can run water for four hours and deliver one gallon per foot. There’s little run off or evaporation and no weeds.

Yet even with technology, there’s little down time at Campbell’s Farm.

By the end of August, Mike wraps up his produce sales, cleaning up the fields and prepping and decorating for the fall activities. There’s more cleanup in November and December as he recycles plastic and makes plans for spring. Before he plants onions, cold crops and potatoes in late February and March, he’s been in the fields, loosening up the soil before laying down drip lines and plastic for planting about a week later.