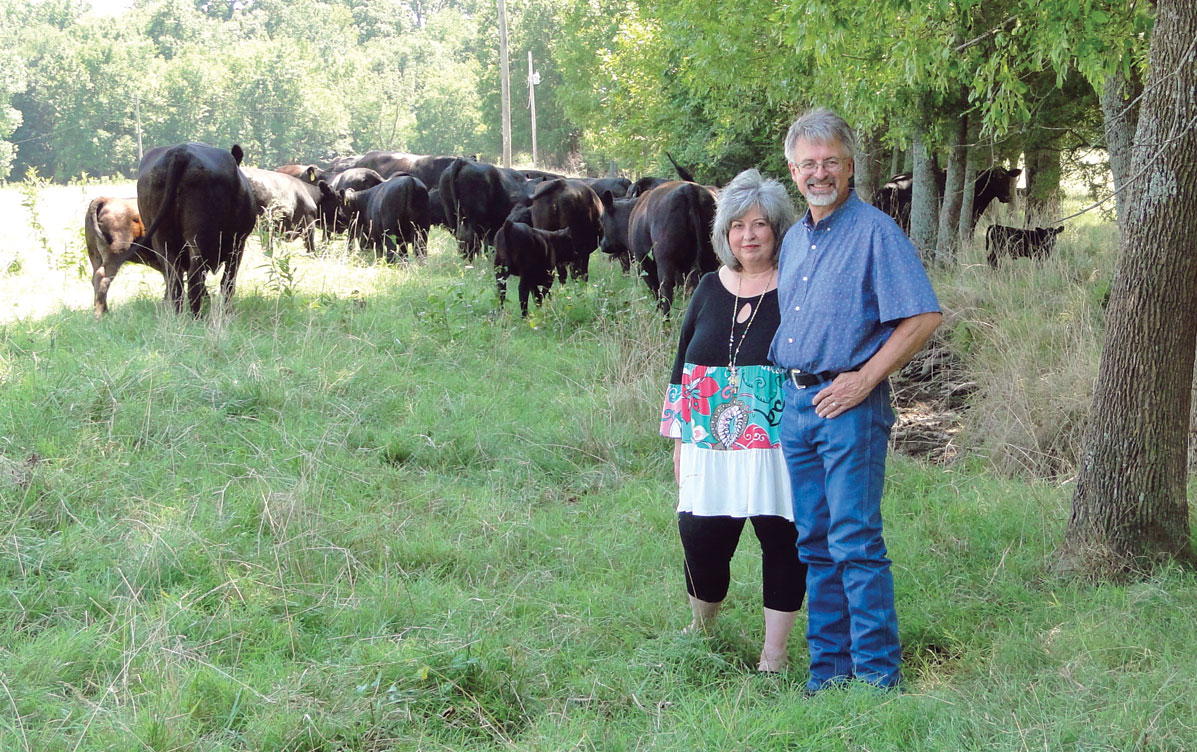 Steven Keady is a man who believes in balance. One example is in his education, which includes one degree in accounting and another in range land management. Another is how he handles his life.

“It’s easy to let one part of life dominate everything, but balance works best for me so I strive to maintain a balance between my farm, my family and being the CFO for Farmers Cooperative located in Van Buren,” he said.

Both he and his wife Marla were raised in agriculture. Steven was raised on a crop, cattle and sheep farm and often disappeared when very young. However, when he went missing, his parents needed only to go to their new John Deere tractor where they would find Steven happily climbing. Marla, on the other hand, was raised on a poultry farm. She remembers, a bit sheepishly but definitely without regret, chasing her sister Kim with chickens because her sister hated them so much.

Their now 17-year-old son Colin was only 3 feet tall when he was once swarmed by cows, who looked mosterous to the young boy, because they thought he was going to feed them. He decided cows were not his best friend and is highly driven toward an entrepreneurial and/or political career. He has already worked with an Arkansas State Representative to alter procedures so that teenagers ages 16 to 18 can have a business license. With his license he now sells a clothing line.

The family lived in Oregon before deciding to move to Arkansas in 2003. Then in 2008, they went to a nearby yard sale and discovered the house and land were going to be put on the market because the owner had passed and the children wanted to sell. Steven and Marla purchased the place though Steven spent nine months preparing for a cattle herd because the land had been leased for years and not well-maintained.

Steven believes the perfect cow is an Angus/Brangus cross. The cross is suited to the local environment, including ticks, and is disease resistance, heat tolerance and has the market “wrapped up.” Further, the Angus Association has developed a good genetic base supported by extensive data. Steven, therefore, maintains a herd of 22 Angus cross mommas and currently has four replacement heifers. He breeds by live cover with his last bull being Brangus though he also uses Angus bulls.

“I tried AI and liked the results,” Steve said. “However, the heifers didn’t take and got out of sync which conflicts with my one breeding season. If I was farming full-time, I would definitely AI though I would still need to maintain cleanup bull. Natural breeding makes the most sense for me at this point in time.”

Steven fence weans his calves at 5 to 6 months to lessen stress and then backgounds and keeps them on feed for 45 days before he sells. For the first seven days, he uses a Purina Precondition feed and then his own three-way mix purchasing the bulk commodities from the cooperative. He determines the protein level by testing the hay he purchases locally as well as by looking at manure.

“Understanding cow ‘pieology’ is important in determining the protein level of feed,” Steven said. “If feed is of low quality, the manure pile has stacked rings and is dryer. The perfect cow pie is like a pancake batter with an indentation in the middle.”

Steven uses rotational and strip grazing with herd movement determined by shade, moisture and soil content. He believes variety is best so his pastures are comprised of Bermuda, Dallisgrass, crabgrass, Bahia and tall fescue, as well as annual rye. His clover content is down because he “cleaned up the pastures” and lost most of his clover, though he is confident it will come back. He fertilizes annually using a commercial fertilizer.  He impregnated dry fertilizer with Grazon on the majority of his pastures and used a liquid fertilizer combined with 2-4D on the remainder in an experiment to determine weed content versus clover growth.

Steven has two farm goals. One is to produce a uniform set of gentle cows that give birth to uniform calves as a result of a short, clearly defined breeding season. The second is to work within nature’s boundary to get the most production so he can eventually market grass-fed beef to consumers as Arkansas Natural Beef.

According to Steven, the most important thing his father taught him was to never give up. When Steven was a teenager, his father sent him to an alfalfa field with a sizable boulder in the middle. He instructed Steven to take the tractor and a chain in order to pull the boulder out of the field. After two hours, Steven went back to his father for help. Unrelenting, Steven’s father instructed him to go back to the field until the job was done. With renewed determination, young Steven took the boulder out of that field and learned an important life lesson.

Steven belongs to various organizations and gives back to the community. In addition to belonging to the Crawford County Cattlemen’s Association, he is the treasurer of the Van Buren Chamber of Commerce Board of Directors Executive Committee and on the Alma Planning Commission, in addition to being the executive director for the Miss Arkansas organization.

Another part of his balance will be deciding when he retires whether to remain in the cattle business or to travel extensively. In the meantime, he is enjoying raising his cattle and still being able to travel occasionally due to the dependability of Larry LaRue who helps whenever.

http://www.ozarksfn.com/2018/09/24/balance-is-key/http://www.ozarksfn.com/wp-content/uploads/2018/09/Keady-1024x643.jpghttp://www.ozarksfn.com/wp-content/uploads/2018/09/Keady-150x150.jpg2018-09-24T00:00:15-05:00Terry RoppArkansas NeighborsNeighborsAlma,Angus/Brangus,Arkansas,Cattle,Keady,pastures,Steven KeadySteven Keady manages his cattle and pastures while working full time off the farm Steven Keady is a man who believes in balance. One example is in his education, which includes one degree in accounting and another in range land management. Another is how he handles his life. “It’s easy to...Terry RoppTerry Roppterrymerrill@hotmail.comAuthorOzarks Farm & Neighbor Newspaper
Alma, Angus/Brangus, Arkansas, Cattle, Keady, pastures, Steven Keady