Boers and More at Tate Farm 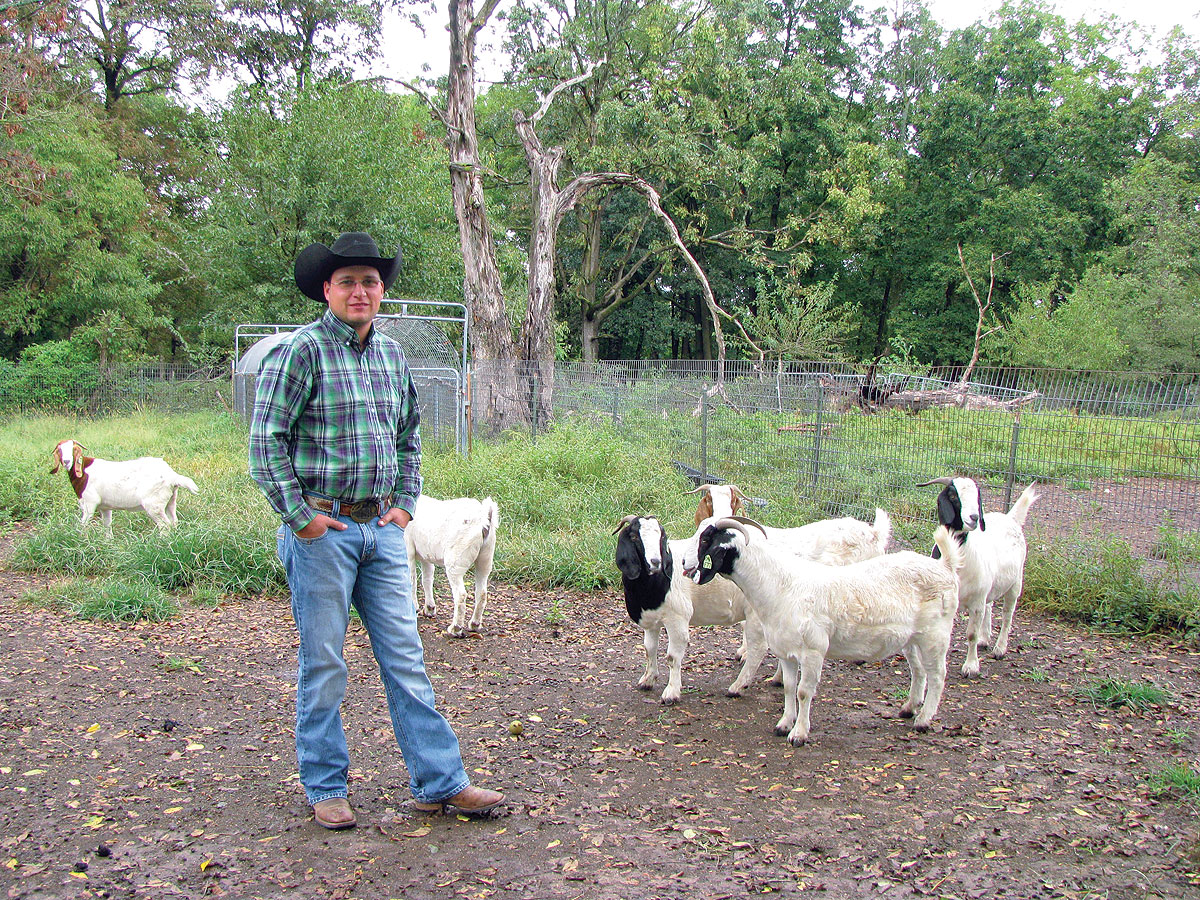 Kyle Tate and his family have a diversified livestock operation near Mountain Grove, Mo.

Kyle Tate raises Boer goats, and Hereford and Angus cattle on the Tate Farm near Mountain Grove, Mo. Half of the farm is in Wright County and half is in Texas County.

Right now he estimates he has around 60 breeding does, and 20 to 25 doe kids that he has held back, plus three herd bucks.

“We’d done some custom hay for some people in Mountain Grove and the renters raised a few,” Tate said. “That’s how I first got introduced to them. Then I researched them and as a breed in general, and the Boers are the main breed for carcass quality and they are the main breed for show on the meat side of things. They are the predominant carcass breed and the most widely shown.”

What started as a project to show has grown into what he has today.

This was the first summer he has not been able to show. He usually participates in the Ozark Empire Fair, Missouri State Fair and the Kansas State Fair. “The American Boer goat Association has two sponsored-type set-ups where you can put on sanctioned shows where they award points to winning animals. It’s a marketing tool,” Kyle said.

“In March 2016, I actually went and passed my certification to be a sanctioned ABJ judge. I’ve gotten to judge a little bit the last couple of years. The does are all registered Boers and then I’ve got a few what we call wether-bred, or part club bred for 4-H and FFA kids. They’re all still Boers. That’s just the jargon for how they’re bred.

When breeding for a great goat, he said, “On the registered side, I kind of like to think of them as just a small heifer. You want them to be really neat-fronted, really good maternal centered, and a lot of meat and muscle to them. They need to be really good on their feet and legs; keep production orientation tools and still have a neat, attractive package kind of like if you’re trying to pick a good show heifer. The flip side of that, when you cross over and you’re trying to select for a show wether or a club goat, they want them to be really hard muscled and really huge hipped and huge top.”

They also raise Angus and Hereford cattle at Tate Farm. Kyle works in partnership with his parents, Keith and Nancy Tate.

“Mom and I are running around 100 mature cows; predominately Angus and then there’s a handful of Herefords left over that dad grew up with,” Tate said. “I make the fifth generation in the family to own Angus.”

There are bulls for sale at Tate Farm.

“Even though the Herefords aren’t registered, we still sell a few purebred Hereford bulls, and sell some registered and purebred Angus bulls.” Kyle explained. “I like for them to be attractive and really robust in their muscle pattern. They’ve got to be good and sound on their feet and legs. We try to make bulls that can go out and cover our hillside and cover cows and be there for the long haul. We have several customers with 7, 8, 9-year-old bulls before they ever come back and buy another one. It’s good because they’ve been happy with them and they’ve stood the test of time. Word of mouth is one of the best advertising tools we have in our industry.”

For their herd, the Tates utilize AI for their breeding program.

“Last year we started using a clean-up bull. I started a job last fall and haven’t been home much, so the bull has gotten to see a lot more use than he had been.”

He is hoping the “job stint is temporary and I can get back to the cattle and goats.”

He is working for Sydenstricker Angus Genetics in Mexico, Mo.

The traits Kyle likes best about the Hereford breed is “definitely docility.”

“In our area, where a lot of dairy cows are being converted into stock cows, Hereford is a great cross on a Holstein or a Jersey,” he said. “They do a little better job of hiding those dairy goat patterns by weaning.”

But when it comes to Angus, Kyle admits, “I’m kind of biased, but the lengths the (Angus) Association has gone for marketing and everything; it’s definitely a black world and I don’t see that changing. There’s just so many premiums and programs out there to get black calves into. The black Angus is here to stay. The National Junior Angus Show and program is one of the best junior programs in the country. I was fortunate enough to attend a junior nationals before I aged out.”

« A Veterinarian and a Veteran
Farm Fun at the Pickin’ Patch »