A Little of Everything 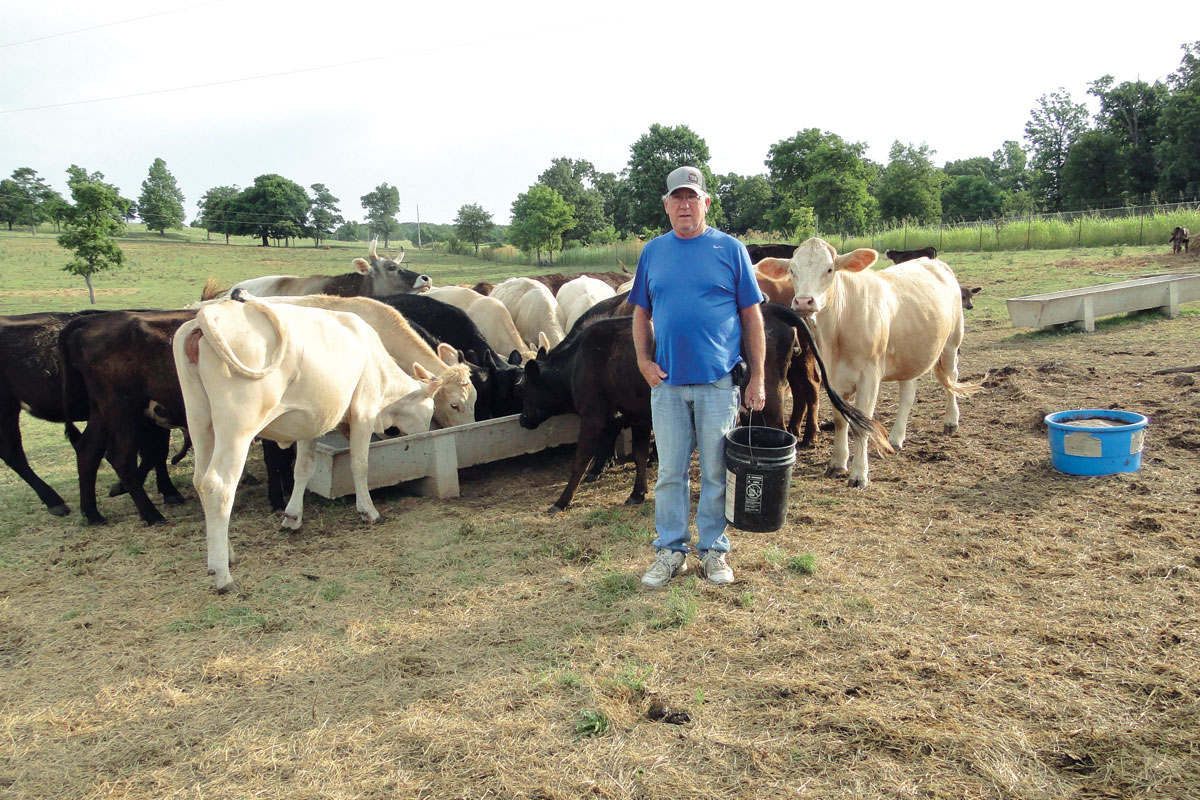 The Wilmoths have a commercial herd, in addition to his family’s Wild Wilderness Safari

“Farmers do a little bit of everything in order to make it all work,” said Freddie Wilmoth of Gentry, Ark.

In Freddie’s case, “everything” takes on a new meaning. Freddie and his wife Sissy, a schoolteacher in Gentry, own and lease more than 2,000 acres in the Gentry area. While most income is derived from raising and selling commercial cattle and buffalo, Freddie also hauls exotic animals all over the country and provides camel rides in a variety of venues.

Freddie’s grandparents were not cattlemen, but his parents, Ross and Freda, were. Some of Freddie’s earliest memories include being 3 and helping his dad with Brahmans that sometimes took the young boy for a dog that needed to be chased away. According to Freddie, in those days many people had Brahmans though often with no corrals, which working in the open and hauling in the back of pickups. In addition, Freddie’s parents raised exotic animals as a hobby which turned into the well-known Wild Wilderness Drive-Through Safari also in Gentry.

“I learned how to love and raise animals from my dad but don’t much care for large groups of people,” Freddie said,. “I love my cattle and the lifestyle they provide.

“My dad also taught me that ‘it ain’t what you make; it’s what you save.’ He showed me the importance of both time and resource management. The best advice I can give to anybody wanting to go into cattle is to start out with crossbred cows and good Angus bulls while watching expenditures, especially equipment, so you don’t get drowned by debt. You also have to plan on doing everything yourself.”

Because time is a premium for Freddie, he has calves only in the spring from February through March so the grass comes on when the cows need to start producing milk.

His herd consists of 180 commercial mommas bred by full-blooded Angus bulls. He sells calves off the cows in November and December when they are 6 to 8 months old, usually in Siloam Springs, Decatur or Springdale, Ark.

Unlike many cattlemen, Freddie sells bull calves rather than steers because castrating and banding are time-consuming with concerned mommas and nervous calves posing a safety issue. Safety is an important consideration because he does all of the cattle work by himself in addition manning his other numerous ventures.

Calves receive creep feed though cows and bulls are solely grass fed with free choice sweet magnesium salt. He retains 40 to 50 replacement heifers each year and culls aging cows when they begin producing calves that are too small or too large for easy birthing or when their milk supply becomes insufficient.

Buffalo are part of the exotic animal trade. Freddie raises both brown buffaloes and the highly desirable and more profitable white buffalo with the herd size of 70 to 80 mommas. Unlike cattle, where black is dominant, a white buffalo bull will produce a white calf when bred to a brown cow. This is important because white often sell for more than three times the $3,000 a traditional brown buffalo will bring. Buffalo are sold by private treaty or at exotic animal sales across the country.

Freddie’s pastures are a combination of fescue, Bermuda, orchard grass and Johnsongrass with naturally occurring white clovers. In order to accommodate his herds, 300 acres is set aside for haying and produces 1,000 bales thereby typically fulfilling his annual need. Freddie appreciates Johnsongrass hay because he cuts it before the grass gets heads and the stalks are too large and tough. All land is fertilized with either litter or commercial fertilizer according to his Natural Resource Conservation Service plan with liquid hen litter coming from local producers. Weeds are broadcast sprayed, sometimes from an outside company because of the large acreage. Weed control is his most serious issue with carrot weed and Russian thistles as his most persistent problem.

“With everything I do, my herd sizes are about what I can handle. I know I should slow up, but I also know I won’t.”

Because of his life-long knowledge and experience with exotic animals at the Safari, he raises some species on his farm for personal pleasure. The camels are popular at festivals and birthday parties and other celebrations where people pay to ride on the tall, gangly animal. People sometimes even come to the farm for a ride. His other personal exotic animals include water buffalo, kangaroos, goats and even Jacob sheep.

The exotic animal transportation business keeps Freddie on the road much of the time. He has six trailers with a 9 1/2- foot tall giraffe trailer and an 8-foot camel trailer. About half of the transportation business is custom hauling from seller to buyer. Examples include transporting zebras and camels from San Antonio to Madison, Wis., or maybe a giraffe from California to Texas or Arizona, though he also travels as far east as Florida. According to Freddie, exotic animal transportation must be sensitive to weather conditions because transporting. One example hot climate animals such as zebras to northern states during cold weather makes no sense. Freddie does not advertise his services because word-of-mouth keeps him as busy or busier than he can handle while also raising cattle and buffalo.

Freddie and Sissy have two grown children, daughter Casey and son Fred, in addition to 16-year-old Jaiden, who loves to rodeo. She competes in barrels, poles and goats with a string of 10 horses. Two are for barrels, two are for poles and one is for goat tying.

“When I was a kid, we had no hobbies. However, Sissy and I took our kids to rodeos for fun and Jaiden caught the bug,” Freddie said with a laugh.