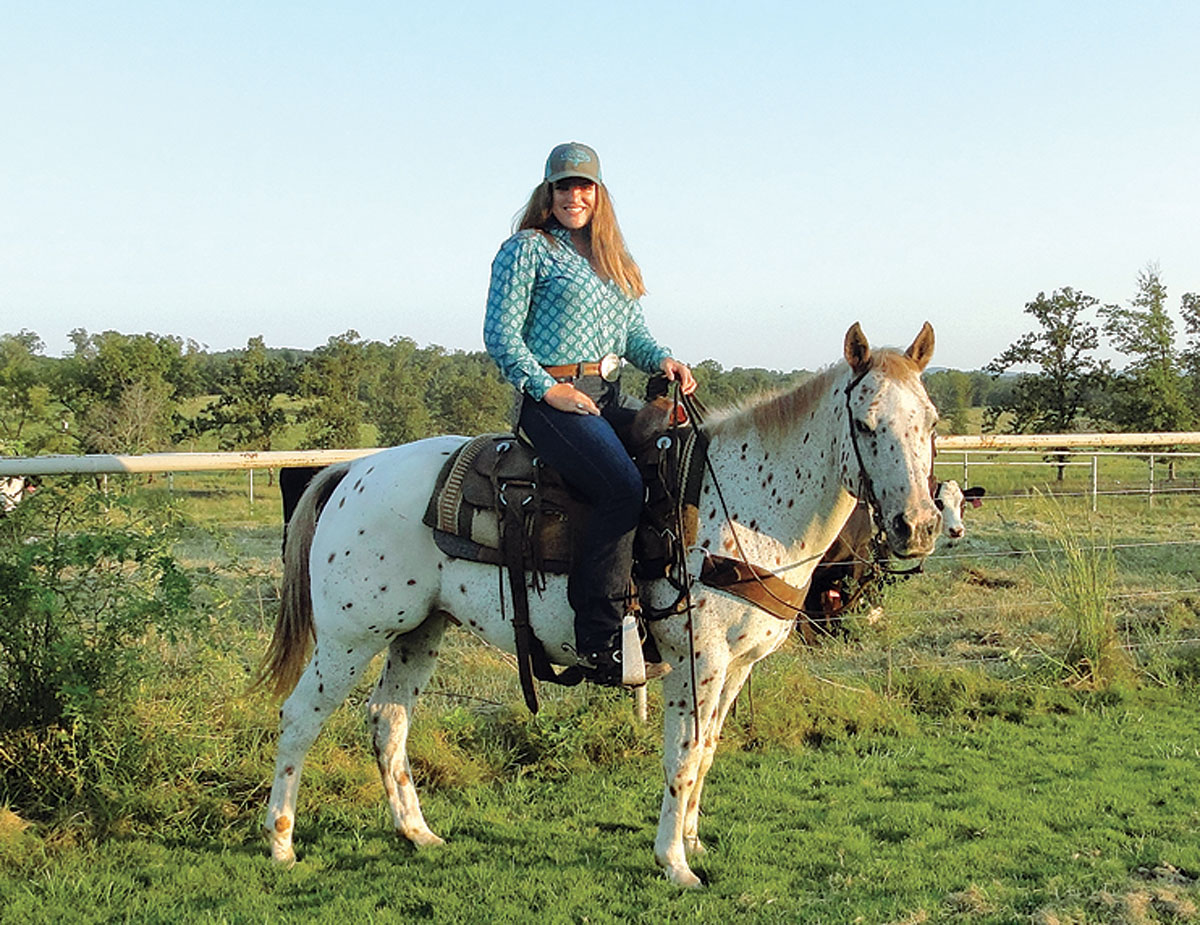 Kelsey Williams of Gentry, Ark., is 20 years old and full of more experiences than many twice her age.

Next fall she plans to deepen her understanding of those experiences by beginning an agriculture degree at Connor State in Warner, Okla., with a minor in ranch management, followed by AI school. At some point she plans to work for a veterinarian in specialized reproductive practices. What speaks to her heart most is someday owning and managing her own large cattle operation.

Kelsey is on a constant quest for new experiences and knowledge. She can’t even remember when her life-long love affair with animals began because she has been surrounded by animals all of her life. She was on a horse with her mother Kelly and her father Richard before she could walk.

When she was in kindergarten and living on a 400-acre ranch in Big Cabin, Okla., she looked out the window of her school bus and saw a goat having complications while giving birth. Without hesitation, she jumped off the bus, threw her backpack down and climbed into the pasture where she pulled the two kids. Her mother said her “brand new baby blue skirt with clouds on the fabric,” got all bloodied, though Kelsey never gave that a second thought.

Kelsey got her first horse named Studly when she was 7. He carried her all the way to the day she got her best horse, PolkaDot, a horse she still uses today. Kelsey and her father drove to Little Rock, Ark., to purchase a Paint cutting horse named Nikki (which she also still owns) when the Leopard Appaloosa gelding captured her heart.

“He was beautiful, so I batted my eyelashes at my dad and boom, just like that, I got him,” Kelsey said. “He has an excellent, more than willing temper and has won me a lot of money in both cutting and barrel racing competitions.”

Kelsey’s horse life was a busy one. At 13 in 2011 she got her first competitive win on PolkaDot as well as 2011 reserve world champion in the Appaloosa Association. That year she was also the first Miss Appaloosa Cutting Horse Association and treasures her belt buckle, tiara and sash. She also won reserve national and world champion on another horse in 2012.  When she turned 17, she stared running barrels on PolkaDot.

“PolkaDot won me thousands of dollars, which I used to buy cattle and horses,” Kelsey explained. “I still use him to this day to help make my living.”

Kelsey worked as a cutting horse trainer for Steve Coclasure in Cushing, Okla., including working horses on the flag, a machine used to mimic the movements of a cow, as well as exercising horses. When she turned 18, she went to work as a reining trainer for Clint Haverty for a short time.

She uses PolkaDot and Nikki, as well as other horses while she works, behind the scenes at various sale barns.

In terms of ranching, Kelsey began learning responsibility and management at the very early age of 7. When Kelsey was 15, she became an entrepreneur with a rabbit breeding business named “Kelsey’s Kuties” in order to earn personal income. She also had about 20 guinea pigs she bred. She created her own website, flyers and business cards and sold babies on social media.

“I enjoyed my rabbits and made money, but after a few years my interest shifted to cattle because I knew I could make more money with them,” explained Kelsey.

Her father, Richard, is from south Texas and preferred cattle breeds that thrived in warm weather for his commercial cattle and breeding stock operation. He traveled to south Texas often taking Kelsey with him as he purchased F1 cattle by the semi-truck loads. He bought Brahman and Hereford cows and bred them to either Hereford or Brahman bulls, thus raising Braford.

Later he would return to Texas to sell his calves because the market demand for hot-weather cattle was better there.

“I was always the ranch foreman taking care of feeding, putting out hay, doctoring, castrating, and I even got to help with the palpating,” Kelsey said.

On one of the trips to Texas when Kelsey was 15, a little black baldie calf followed her everywhere she went. Regardless of her dad’s preference for warm-weather cattle, Kelsey really wanted the calf for her own small herd at the time.

“It was love at first sight. I batted my eyelashes again and said, ‘Daddy, Daddy, please!’ He bought me Hankie as I immediately named him. Hankie was always extremely docile. I could walk up to him in a field of cows in heat, at his heaviest weight of 1,800 pounds, and jump on his back. He wouldn’t move a muscle as I would lay on him and cover him in kisses.”

He ran with her cows and some of her dad’s and produced 90 percent of the calves, even though other bulls were with the herd.

Independent as always, Kelsey is developing her herd with northern climate cattle which she keeps at her mother’s place in Gentry, Ark. She has several British Whites and she also likes Shorthorns because they are good mothers and have marbled meat like the British Whites. She kept heifers out of Hankie, who was taken from his pasture while she was sick this year and sold at a packing house. Kelsey plans on breeding his heifers so she can retain his genes.

Following her father’s practice of selling his cattle in Texas because that’s where the best market is, Kelsey plans on selling her British Whites “up north” for the same reason. She has a British White bull and several cows in addition to some Shorthorns and Hankie’s daughters. Because she is in the herd building stage, she keeps heifers in order to increase herd size with the types of animals she prefers for the least cost. Currently Kelsey is focused on developing breeding stock as opposed to market cattle and would love to someday have a commercial feed yard that would also support her own calves.

Kelsey has the mind of an entrepreneur. She is resourceful and creative. Her deep experiences within the industry and her strong sense of independence have led her to an industry view that incorporates the whole picture as well as the individual parts at the same time. Owning a large ranch and a feedlot as well as her own reproductive services practice may well come about sooner than she thinks.

« The Future is Yours
Pigs and Poultry »