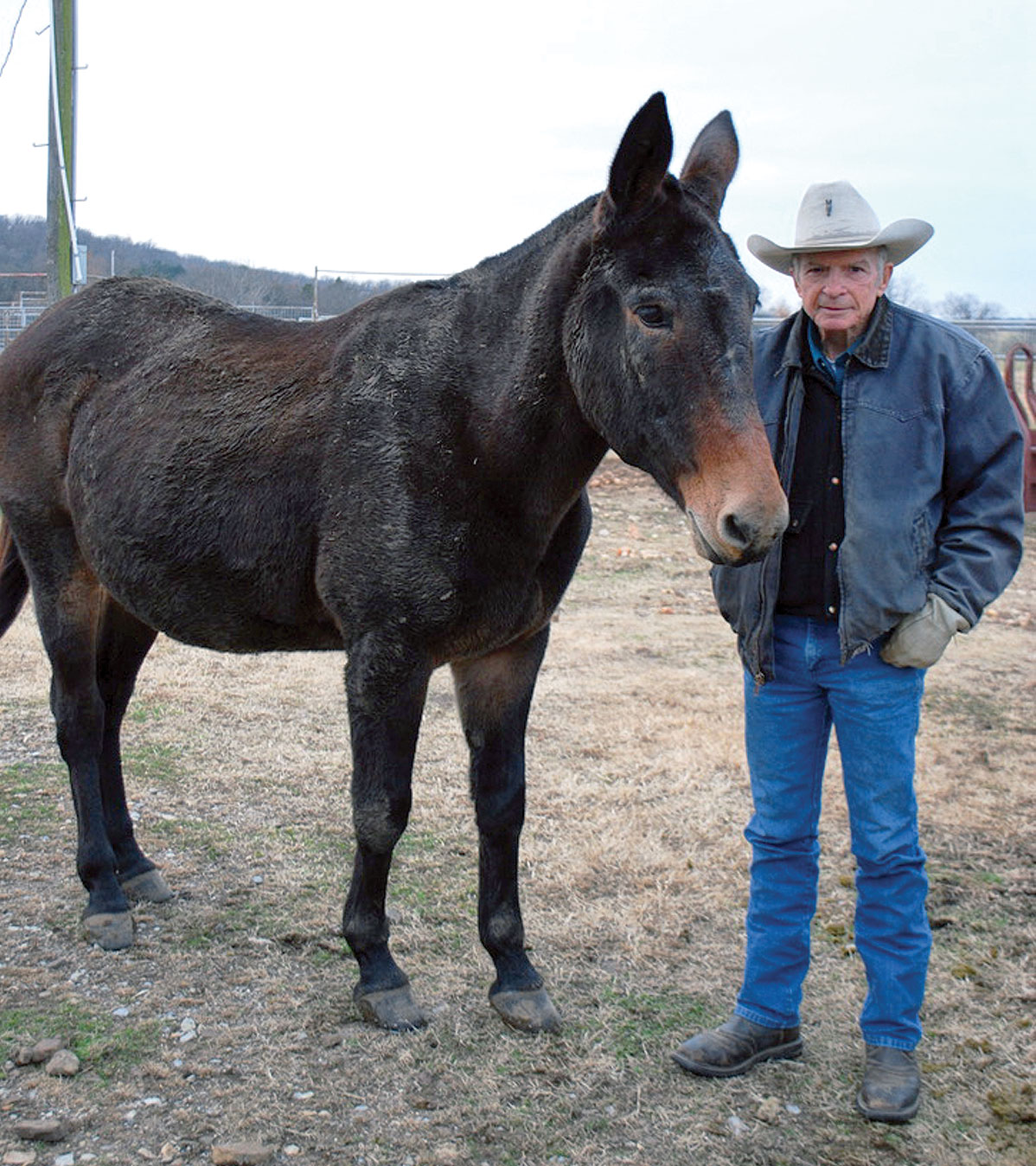 After more than three decades, mules are still a way of life for Loyd Hawley

“I’ve ridden horses since I was 2 or 3 years old, and I always wanted a team of mules to work, so I bought a team, they were not even broke to ride, just broke to work,” said Loyd Hawley describing the early years of what would come to be known as Hawleywoods Mule Farm.

Loyd purchased his first team of mules in 1981 to be used for work, pulling horse-drawn equipment around the farm. He then bought a second team of work mules, but these were soon broke to ride and ridden on trail rides, which was one of Loyd’s favorite ways to spend time as a family. It didn’t take long for mule farming to become a full-time family business.

Before mules, Loyd and his family maintained a 100-head Holstein heifer operation, where embryo transplant and shipping of frozen embryos was their main line of work. Loyd and his sister, who married a Woods, were in partnership with a herd of registered cattle and they needed a prefix to use when registering their animals, so, they merged their names and Hawleywoods was created.

“It wasn’t a play on Hollywood, but it worked out that way and has been a good name,” said Loyd.

A mule is the offspring of a male donkey (a jack) and a mare. Since mules are not reproductive animals, it takes a lot of work, along with a number of jacks and mares to create a sustainable business.

“For many years I kept over 100 head of mules and horses at one time,” Loyd recalled.

They have since downsized, but in their prime, Hawleywoods was at peak production with 35 broodmares, three stud jacks and 40 to 50 mules, which made up their operation, a 60-acre farm located in Prairie Grove, Ark.

It didn’t take long for Hawleywoods Mule Farm to get the ball rolling.

“I was always willing to sell for the right price,” Loyd said. “If I’d get a good mule and someone was interested, I’d price it, and if they wanted to make a deal, I’d sell it and buy myself another, pretty soon I was in the mule business.”

It certainly wasn’t just raising, buying and selling mules for the Hawley family. Early on, during a trail ride with some friends, Loyd was asked if he was going to the mule show that coming weekend, not knowing what a mule show was, Loyd loaded up the trailer, took off to Missouri to enter, competed, and as many would say, the rest was history. Once entering that initial show, he was hooked and became active in mule showing, going to around 25 shows a year in the surrounding area, including Arkansas, Missouri, Oklahoma, Kansas and Texas.

“It’s more fun when you are competitive and I wasn’t a fan of just participating, I wanted to compete and to win,” said Loyd.

He knew it was going to take purchasing better mules and training them right to get to the top. So that’s just what he did, and pretty soon Loyd and his children were seen in the winners circle more often than not.

“My wife didn’t compete, but she took care of us at all the shows, making sure we had everything together,” he said.

It took consistency, dedication, practice and patience, each year the competition got stiffer so the Hawley’s training program had to continue to improve also. There came a point where it wasn’t just local shows they were attending, but national shows as well. The Hawley family attended the Mule Days in Bishop, Calif., on several occasions, and over time, Loyd came home with four all-around, high point wins in the Gymkhana Division, well-known as timed, speed events.

Showing certainly helped business to grow, because when you win people notice you and they want to be able to compete with you, so they learn from you, buy from you or have their mules trained by you.

Loyd would train mules whether they were ones he raised, or that others had bought.

“The key to training any animal is to understand the animal, mules are one-on-one animals and they need to form a bond with you,” said Loyd when discussing how to approach training the mules. He describes the animals as self-preservationists, “not that they won’t spook on you, they are just more aware of their surroundings and cautious.”

“Getting to ride is the best part of the business,” Loyd said.

Trail riding still serves as his favorite past-time and he’s ridden numerous places, such as, The Rockies, Santa Fe and Arizona to name a few.

There are currently 11 mules on the farm.

“Each morning I get up to catch them, give them a bite of grain, then I’ll dry lot them for the day and separate out the ones I am going to work with,” Loyd said.

Loyd enjoys taking mules for rides down the road or up in the hills.

“I don’t suspect I’ll ever really quit,” he sentimentally said.

http://www.ozarksfn.com/2019/01/07/the-fame-of-hawleywoods/http://www.ozarksfn.com/wp-content/uploads/2019/01/Hawley1-1-1024x697.jpghttp://www.ozarksfn.com/wp-content/uploads/2019/01/Hawley1-1-150x150.jpg2019-01-02T16:02:57-06:00Sarah BarmallArkansas NeighborsNeighborsArkansas,donkey,Hawleywoods Mule Farm,Holstein,jack,Loyd Hawley,mare,mule,Prairie GroveAfter more than three decades, mules are still a way of life for Loyd Hawley “I’ve ridden horses since I was 2 or 3 years old, and I always wanted a team of mules to work, so I bought a team, they were not even broke to ride, just broke...Sarah Barmall sbarmall@ozarksfn.comAuthorOzarks Farm & Neighbor Newspaper
Arkansas, donkey, Hawleywoods Mule Farm, Holstein, jack, Loyd Hawley, mare, mule, Prairie Grove