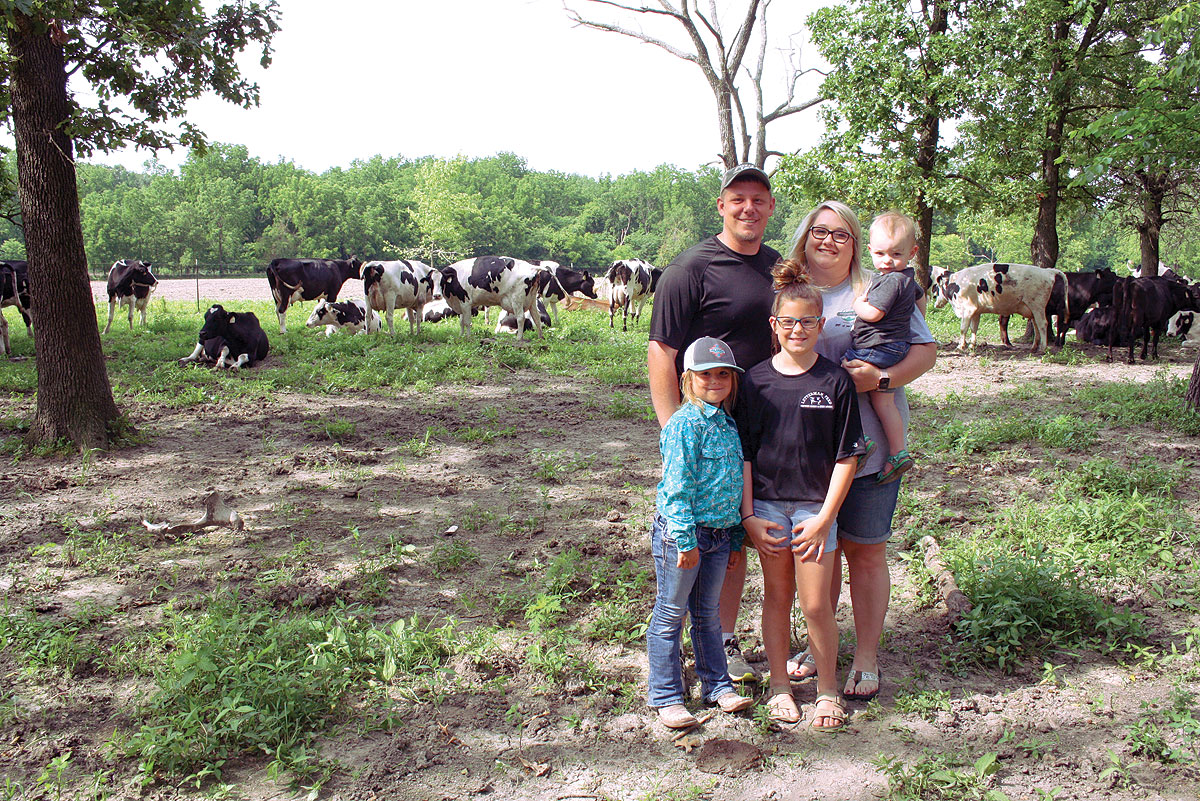 In 2009, Robbie Letterman was faced with a dilemma; he could either sell his dairy heifers at a loss or start milking cows. He opted for the latter.

“Whether it was the right choice or not, I don’t know,” Robbie said with a laugh.

Robbie’s wife Ashlee said the decision to start a dairy farm came only a short time after they were married.

“We got married and within a month he said we were going to rebuild the milk barn and we’re going to start milking,” Ashlee said. “I grew up around beef cows, but milking was a whole new world. Within three months, we had 200 cows calve and I had 200 calves on the bottle.”

Today Letterman Farms and Dairy in Niangua, Mo., is milking 160 cows, with about 30 dry cows waiting to freshen.

Robbie has been around the dairy business most of his life. His parents milked, as did his grandparents. Robbie and Ashlee remodeled a barn on the Letterman farm that was built in the late 1970s by his grandfather, converting it from a double-3 walkthrough into a double-10 parallel.

Cows are dry-lotted, which Robbie said works better for his operation.

“I tried to graze my cows, but I don’t really like it,” he explained. “My ground here, the way it lays, is not suitable for grazing. Even if I was just milking 100 cows, they would have to come too far. I actually get more milk from them by feeding more than if I was grazing. I stay more consistent in my production year round, with a small drop in the summer. If you graze, you’re going to have roller coaster production.

“I keep my cows happy and full. If the weather is going to be bad, we will run roll hay to help keep them warm and dry, and we work to keep manure contained.”

Although they began with Holsteins, the Lettermans have added Jersey genetics to their herd and milk several cross cows.

“They don’t eat as much, they milk just as good and their butterfat is better,” Robbie said of the Jersey/Holstein cross cows.

“I don’t own a single dairy bull,” Robbie said. “The Angus-cross calves are worth more. Dairy heifers won’t bring anything and we converted to beef bulls about a year ago. If I need more cows, I’ll buy cows that are in their first or second lactation because it’s cheaper to buy them than to raise them. One of these days it might be backwards of that, but right now that’s how it is. I also want to try to get away from calving heifers as much as I can.”

Heifers and steers from the Angus cross are sold at about 400 to 500 pounds.

Robbie utilizes a Kansas-based nutritionist for his dairy herd, and for his dairy customers at Letterman Feed who want to optimize their herd nutrition and milk production.

The Lettermans rent and own about 1,300 acres, where they raise much of their own feed, including corn silage, wheat and hay.

“We try to put up everything that we can, but we still have to buy a little,” Robbie said. “If the price is right, and it’s affordable, we might buy a little alfalfa for the milk cows. Corn silage and wheat have been a big part of our forages over the last several years.”

Nutrition, Robbie added, is key to a productive animal, as is proper health care. Cattle in the Letterman herd are vaccinated annually, dewormed a couple times a year and hooves are routinely trimmed. Robbie added that cows that are underfed, unhealthy and overstressed are not productive cows.

“As we lose our family farms, I think we might lose that,” Robbie said. “As you go into bigger dairies, I worry that you will lose the quality of care because they will look at that dollar amount. Family farms care about the bottom line, but the cows are important to smaller farmers.”

In addition to the farm and Letterman Feed, Robbie owns Letterman Triple T Repair and a small trucking business.

“It’s hard to make a living today just milking cows,” he said. “It takes some other source of income to make it go.”

The Lettermans also run stock cows. Robbie is in partnership with Jeff Atteberry on about 220 Angus-influenced cows, and has his own herd of about 70 cows.

With the struggles of dairy farming, Robbie admits there are times he thinks about getting out of the industry, but he, like many other farmers, have too much investment at stake.

“With the price of replacements, you can’t get any money of out (cows) when you sell them to even get out,” Robbie said. “When you look at the dairy industry, everything has gone up, but the price of milk (paid to the farmer) hasn’t. If you just milked cows and didn’t have any heifers or anything running around, the milk cows will make you a little money, but it’s the cost of everything else that hurts a person.

“Dairy farmers are the only ones who have to buy at retail and sell at wholesale. The corn farmer can hold his corn for a little while to get a better price, but dairy farmers have to take what they will give, and I think that’s what makes it toughest on the dairy industry… I like to say I’m going to sell my cows, but as long as we can keep help, come up with the feed for them and buy replacements, I will probably always milk,” Robbie said. “My grandpa was in and out of milking, but he always came back to it. I think when I rebuilt the barn, it was him that pushed me to go ahead. We put enough money into the barn that this is what we have to do because that is it’s one and only use.”

While remaining in the dairy business is a struggle, the Lettermans feel it’s a great lifestyle for their young family, which includes daughters Adalee (10) and Brinlee (6), and son Cater (1).

“It’s been a good life for us,” Ashlee said. “I grew up on a farm, but not like the one my kids are growing up on. They have to help with things I never had to do and it’s been good for them.”

“I like the environment for the kids,” Robbie added. “It also teaches responsibility, which a lot kids have lost these days. I also like the cows. There ain’t nothing better than seeing a bunch of black and white cows running around.”

« Keep Your Skin Safe
Room to Grow at Fellwock Dairy »