150 Years of History in One Place 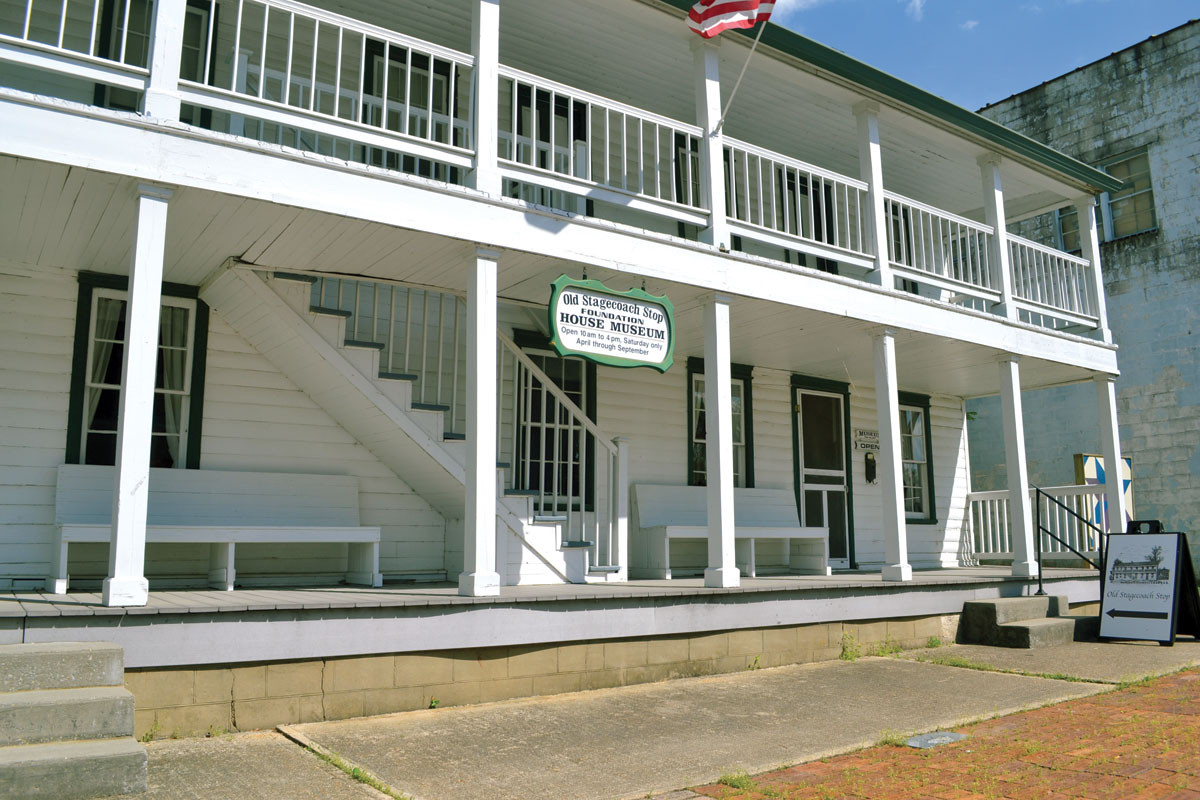 More than 150 years ago, William Walton McDonald built two 16-foot by 16-foot log cabins connected by what’s known as a dogtrot area or breezeway. The design was that of a stagecoach stop on what is today the Waynesville (Mo.) city square.

McDonald and his family lived in one of the cabins and used the other to welcome coach drivers and guests. Within a couple of decades, the building was commandeered during the American Civil War by the Union Army as a field hospital. In coming years, it would be renovated, added onto and used as a hotel and later as apartments through the building of nearby Fort Leonard Wood at the beginning of World War II in the 1940s.

“Thirty thousand workers descended on the area at that time,” Jeanie Porter, president of the board of directors of the Old Stagecoach Stop Foundation, shared at the end of a day of public tours.

Along with eight other board members, Jeanie provides free tours to those who stop in on Saturdays from 10 a.m. to 4 p.m., April through September.

“There were only three hotels in the entire area so you could rent a bed for an eight-hour shift to sleep and that was it. Of course, there were a lot more beds in here than there are now,” she added with a smile. “It took four months to build Fort Leonard Wood with a new barracks going up every 45 minutes.”

The Stagecoach Stop served the area for more than 100 years and was listed on the National Register of Historic Places in 1980. Within a few years, however, it had fallen into disrepair and was slated for demolition by the city of Waynesville. At that time, a local couple, Gene and Maxine Farnham, spearheaded the effort to save the building.

The museum’s rooms, upstairs and down, have been organized to highlight various eras and owners of the building’s history, from its original log cabin construction to its part in support of the area’s 20th-century growth.

“The bed in the family’s original living quarters is a rope bed, which is where the phrase ‘sleep tight, don’t let the bed bugs bite’ comes from,” Jeanie explained. “The ropes that supported a mattress, which was often stuffed with hay or corn husks, had to be tightened from time to time, as they sagged under the weight of whoever slept in the bed. The beds upstairs reflect the 1940s and 1950s modern beds that use metal springs and more modern mattresses.”

There is a room dedicated to the building’s Civil War years.

“One of the owners, Alexander Bryan, fought for both sides during the Civil War. We found in our research that happened more than once. Apparently, someone might start out supporting one side and then became disillusioned or upset, or decided their views really lined up more with the other side and so they would switch their allegiance.”

Other rooms are built around different aspects of the changes in American culture. A dining room highlights china from the time when the Stagecoach Stop was owned by Eliza Black and her daughter Amanda, and known as The Black Hotel. Initially purchased by Eliza and her husband Lewis and their two sons, Lewis died five years later. Eliza and Amanda operated the hotel for 21 years. They were well-known for their fried chicken dinners and Amanda’s extensive postcard collection, part of which is still on display there.

Another room features the dentist office of the building’s owner at the time, Dr. James Titterington, and yet another has a full set of Charles Darrow’s famous game, Monopoly, which was initially rejected by Parker Brothers. Darrow began to produce copies of his game and sell them on his own. When he had sold more than 5,000 copies, Parker Brothers reconsidered their original decision and Darrow became the first game millionaire.

The Stagecoach Stop also served as the local post office at different times, and many locals dropped in to collect their mail regularly. During the last public hanging at the nearby Pulaski County Courthouse, the building owner at the time realized people could view the hanging from the second story balcony. The authorities had erected a fence to block the public’s view so that women and children would not see the gruesome spectacle. So many tickets to view the hanging from the balcony were sold that a fight broke out at the base of the steps and many missed the hanging because they were too busy watching the fight.

After the Old Stagecoach Stop Foundation took over the building, it had to have soil removed from beneath the original log cabin’s wooden floors to stabilize the structure. The foundation also enlisted local accelerated eighth-grade students in 1989 and 1990 to do salvage archaeology under the building to remove dirt and discover any artifacts. Multiple items were found, including bullets from the Civil War era, buttons and other bits of military insignia, and numerous shards of pottery and china, many of which are also on display at the museum.

Today, the Old Stagecoach Stop Foundation conducts tours, publishes a newsletter and maintains a website. They also host and participate in a number of area tourism activities such as Route 66 celebrations, motorcycle and bike rides, Old Settlers Day in July, Oktoberfest and Christmas on the Square.

« The trouble with bananas
Keeping the Tradition »