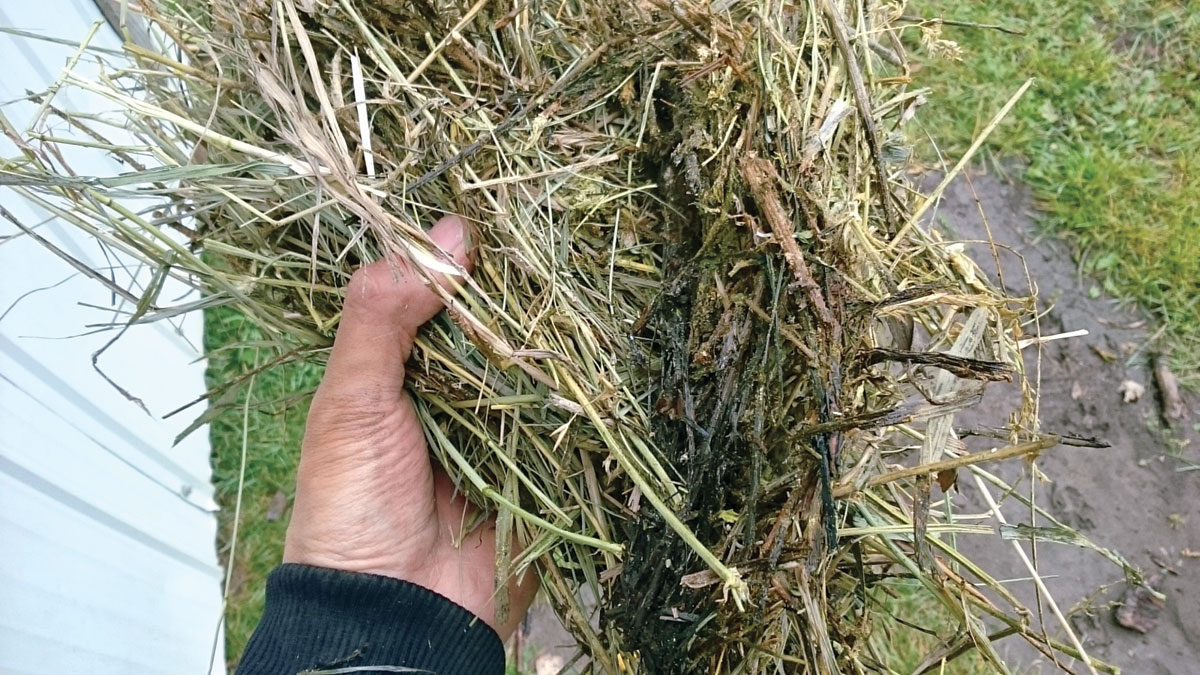 After last year’s drought, this year’s wet summer came as a bit of a surprise in the Ozarks.

While producers are grateful for the rain, it has presented big challenges for hay production.

“Not only has hay harvest been delayed, leading to lower quality hay, but drying time with humid, wet weather has been drawn out in some cases. For this reason, some producers were pressured by weather fronts moving in to harvest at a wetter moisture than normal,” Tim Schnakenberg, agronomy field specialist with the University of Missouri Extension in Stone County, said.

The kind of moisture levels that farmers are dealing with this year will unfortunately, lead to the development of moldy hay, in many cases.

“This problem usually results in one of two issues,” Schnakenberg explained. “The initial concern is the threat of a hay fire that could destroy hay that has been stored in a barn or sometimes rows of hay stored outside. It can also result in developing a whole plethora of hay molds that will result in cattle refusal issues. Molds found in hay can include Aspergillus, Altermaria, Cladosporum, Fusarium, Mucor, Penicillium and Rhizopus.”

The development of mold in harvested and stored hay will turn a lot of livestock off of their feed.

“Low palatability and refusal to consume hay directly affects the bottom-line. It means that even more hay or supplementation is necessary to provide the nutritional needs for cattle to get through a winter,” Schnakenberg said. “If hay is already moldy, it is best to be selective in what class of livestock it is fed to. Horses are the most sensitive to moldy hay due to respiratory and digestive problems. Cattle are less sensitive, but refusal can be the greatest problem for them. Dilution of the problem hay sources is one of the best ways of dealing with it, whether with better quality hay, stockpiled fescue pasture or with feed supplementation. A University of Tennessee study found that when feeding severely molded hay to cattle, limit it to no more than 30 percent of the total ration.”

If possible, farmers are encouraged to prevent mold issues. Schnakenberg offered a few guidelines to help with this process.

“The best approach to dealing with mold is prevention. Close observation of upcoming weather patterns, the use of a tedder and/or crimper to speed up the drying process, using hay preservatives and monitoring moisture levels before baling with moisture meters, all give the haymaker tools for decision making and baling,” he said. “We recommend baling round bale hay at 18 percent moisture or less.”

It is not just livestock that can have issues with moldy hay; it can present health problems to humans too. Schnakenberg cautioned producers dealing with mold to remember that moldy hay can lead to health issues with humans as well. It can lead to farmer’s lung, where a fungus grows in lung tissue.

If a producer’s hay molds, it is recommended they consult local professionals and their large animal veterinarian to determine feasible options for their hay crop. In some instances, moldy hay might be better utilized as mulch or erosion control instead of risking the potential for low feed intake, respiratory issues or abortions.

When is the Right Time to Feed Hay?