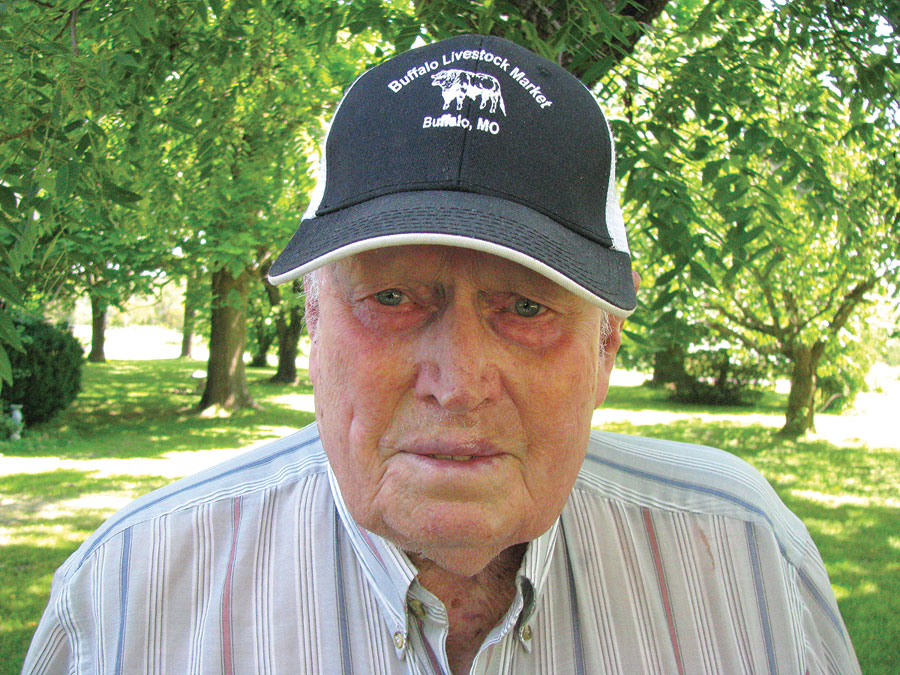 Every farmer is unique in their own special way. That is especially true of Vernon Jones and the breed of cattle he raises – White Herefords.

At the age of 92, Vernon lives on the 300-acre farm he and his wife Jean moved to in March 1949. The farm is located near Elkland, Mo., in Webster County. They married on July 11, 1948, and had two sons and a daughter. One son passed away, and Vernon and Jean were together 61 years before she passed away.

Jean and Vernon started their farming life together modestly.

“She had a cow and I had one or two, and I had a team of horses. We just started,” he said. “I’ve been farming all my life. I took agriculture (in school), and that’s what I wanted to do. I worked towards that.”

Vernon and Jean started a dairy farm, but it wasn’t long before he had a beef herd as well.

“I was milking a bunch and didn’t know if I wanted to do that or not,” Vernon explained.

Becoming a mail carrier in 1962 helped him decide on the direction for his farm. He said “carrying the mail and milking just weren’t going to work out.”

That’s when, he started leaning toward the beef cattle operation, eventually getting out of the dairy business. Vernon was a mail carrier for 31 years and still farmed.

When Vernon got into beef production, cattle were “different” and there weren’t too many breeds in the area.

“Herefords were pretty popular then,” he said. “I had some Jerseys when I was in school and I changed over to Brown Swiss. That’s what I crossed over with the white-face,” he said.

Vernon was impressed with that combination. They produced a lot of milk and were great mothers.

Vernon first saw White Herefords in the early 1970s when a neighbor brought in a group from Nebraska. Vernon liked the cattle and soon started his own herd of White Herefords. He got the first ones from his neighbor, and grew his herd. Over the years he has reduced his herd size and now has a herd of about 12 White Herefords, along with his typical red Hereford herd.

At that time, White Herefords were, and still are, unusual. The breed is not an albino.

White Herefords are a lot like traditional red white-faced Herefords when it comes to size and disposition.

“In the wintertime their hair will get long and curly and they stand the cold weather good,” Vernon said. “People do mistake them for Charolais, and Charolais are altogether different. They have a different temperament. People mistake them because there aren’t many White Herefords around.”

He likes the disposition of the Hereford breed, and he has had other breeds.

He also had a herd of Limousin.

“I tried to buy a bull and couldn’t find a red one. They were all black and I didn’t want to go black,” Vernon said. “I once had black baldies and those things would kick you. One Sunday morning I went to feed grain. One of them kicked me and I had to go to the hospital. It wasn’t long before I sold that bunch of cattle. They were all black baldies. A disposition means a lot to me. These white ones and the red Herefords have good dispositions.”

“If you breed the white cows to a registered red white-face bull, they will come out white 60 percent (of the time). Once they come out white, there is a pretty good chance they will continue to produce white.”

Over the years, Vernon has sold both heifers and bulls to other cattle producers.

The type of cattle is not the only thing that has changed since Vernon began farming. The biggest change has been going from “horses to tractors. I started out with horses,” he said.

There is also a difference in the way cattle are sold.

“Used to, you didn’t have any sale barns. We’d haul them to the stockyards and they’d have buyers up there. The buyers would come around. They would get $5 a head for bidding on them. They would give you a price and you could take it or leave it. Then somebody else would come by,” Vernon said.

Vernon’s grandson, Kyle Jones, lives nearby and helps with the farm.

Kyle helping Vernon said he has learned a lot since he started about patience.

Vernon is a deacon at Mission Chapel Baptist Church. His faith is very important to him.

“I’ve been a Christian all my life. We don’t have the promise of tomorrow, and everyone needs to be ready,” he stated.

« Sunrise Horseshoeing and Harness and Tack
Watching Over Waynesville, Mo. »