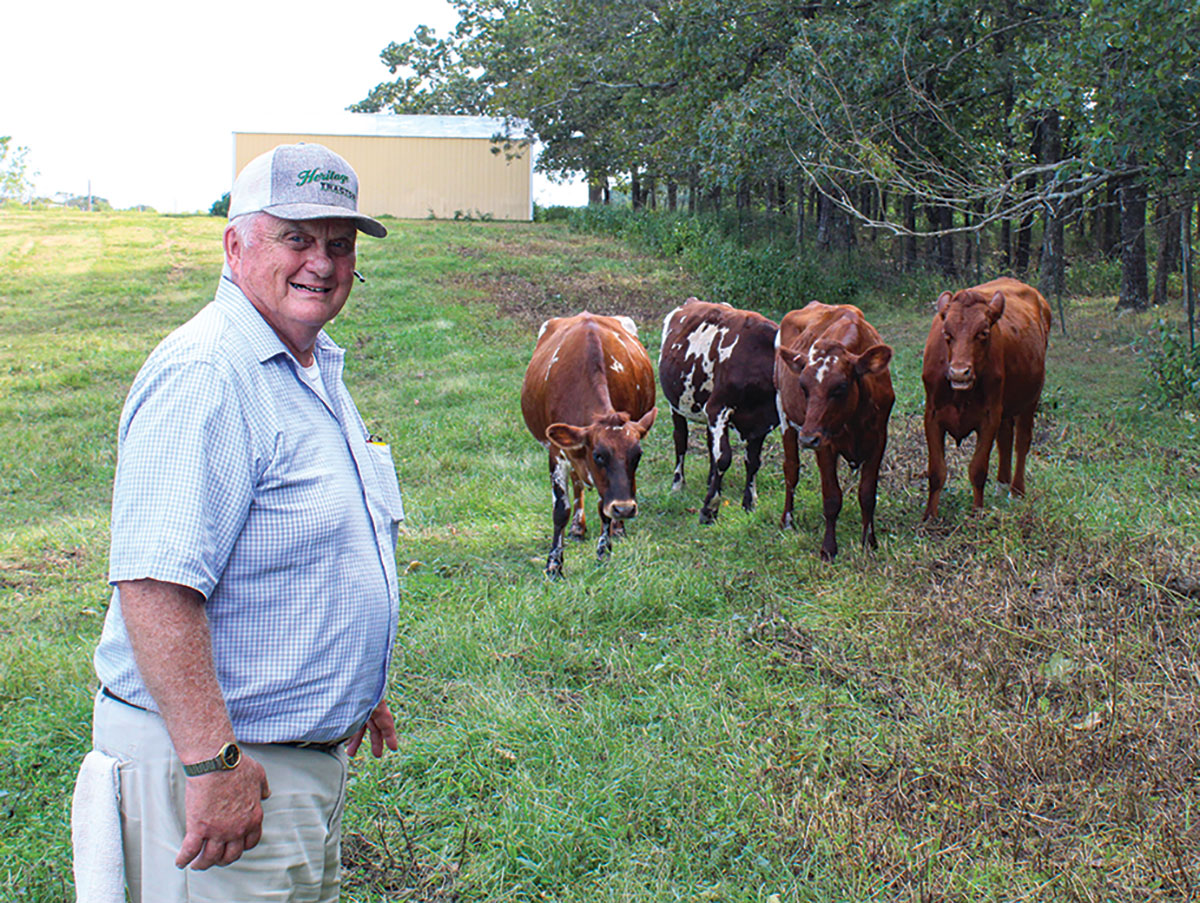 Despite no longer milking, Donald Benson is still involved in the dairy industry and dairy cattle

“My family has always been involved with Ayrshire cattle,” explained Donald Benson of central Howell County. “My grandfather bought the first registered Ayrshire in 1910 and we’ve been involved since then,” he recalled.

Donald and his wife Connie moved to Missouri in 1983 from Virginia and began Benayr Farm.

“We operated a dairy here in West Plains until about 1998,” he explained. “And when we stopped milking, we started raising replacement heifers. We generally run between 30 to 40 cows.”

Donald grew up showing cattle and his kids showed as well.

“It’s something I’ve always been interested in and am happy to have my grandkids showing now too. About six years ago my grandson expressed interest in showing cattle, so I started breeding heifers for show calf classes – March, July, September and December born heifers.

“I also raise and sell heifers to 4-H and FFA kids who are looking for a show project. I’ve sold quite a few animals into Louisiana and Mississippi where they don’t have as many Ayrshire breeders to purchase heifers,” he said.

“I AI the cows and heifers using sexed semen so I can assure heifers, and we have a registered  bull on the farm for any females that don’t settle the first time,” Don said. “Because we don’t milk cows here anymore, I work with a family in Ava who helps with the operation. They take care of cows with feed and pasture and get the milk in exchange, so it’s a win-win for us both.”

Selecting the right breeding combination is key for Donald and his operation, and he finds AI gives him the best options possible.

“I choose the sires based on production proofs and like to breed based on what I’ve seen the bull cross well with. Using a variety of studs services allows us to gain more genetics and continue to improve on the quality females we have,” he reasoned.

“They breed some of the cows there (at the Ava farm) and I do some of them. I bring the bred cows here and keep them until about seven to 10 days before calving. Then I take them to the farm in Ava. They calve the cows there, so when I bring the calves home, the cows don’t tend to go looking for them as bad,” he chuckled. “One year I calved the cows here and took the cows to the milking operation in Ava, but they took off looking for their calves. So now we calve them there and bring the calves back to this farm.”

Don used to sell fresh 2-year-old cows after getting a calf, but when he got opportunity to work with the milking farm in Ava it made sense.

“Once my grandson starting showing, I got more involved with raising heifers for show cattle and we started breeding for heifers calved for the show cattle classes.”

The Bensons moved to the Ozarks in the mid-1980s, purchasing 176 acres.

“Once we stopped milking, we sold some land, and now raise cattle and hay on 102 acres. We raise our own hay and have someone do custom baling so the hay is from our own farm,” he said.

“I don’t own equipment and honestly if I get around it, it seems to break, so I’m happy having it done for us.”

Growing up on the East Coast and his family being involved in Ayrshire cattle, it’s all Don has known.

“I worked for the Ayrshire Association for four years, scoring and classifying registered animals for producers and promoting the breed,” he explained. “I used to travel 70,000 miles a year and spent 300 nights in hotels. My dad did this same thing, starting just before I was born.

“This breed has always been in our family,” he added. “Some of the young cows we started with in our replacement program we bought from a New York registered herd that was selling out seven or eight years ago. Then the next year we were able to buy heifers. They were all registered and because of my work with the Ayrshire Association I knew they were quality herds.”

Donald is a past president of the Missouri State Ayrshire Association and has served as director and sale manager. Over the years the Benson family has had numerous winners, including two junior All-Americans and multiple grand champions at the Missouri State Fair. Don has been a dairy judge at various shows in Missouri, Arkansas and Virginia.

Donald was inducted into the Missouri Dairy Hall of Fame in 1997 with the 1997 Distinguished Dairy Cattle Breeders Award.

Donald was just 3 years old when he showed a bull calf at his county fair, and he has been hooked on the Ayshire breed since then.

“I love working with the animals and as I’ve gotten older, raising the replacement heifers has allowed me to stay active but on a less intensive level since we are no longer milking,” Donald said.

“This is something I have always done and something I look forward to every day. Being able to check the cows on a slower schedule then having to milk every 12 hours is just perfect for me,” he added.

“I have enjoyed sharing what I know with kids who are interested in showing. My advice to those interested in agriculture of any kind is to find someone like myself that has experience and work with them to learn,” he said. “I’ve been involved in the dairy business all of my 75 years and I’m happy to work with my grandchildren and other youth to help keep the business alive and well. It’s what I’ve know and what I love,” he added.