Small ruminant reproduction is not  “cut and dry,” according to experts

As the days begin getting shorter, sheep and goat producer’s thoughts will turn toward breeding their herds and flocks.

Female sheep reach sexual maturity between 6 to 12 months, and female goats between 4 and 12 months. However, when to breed is not that cut and dry. It takes evaluating a herd or flock, doing some research, and having a little bit of instinct.

“It all depends on when they were born, gender and weight; those are the big three,” Dr. Elizabeth Walker, animal science professor at Missouri State University said. “Most sheep and goats are seasonal breeders, I say most because there are exceptions and some breeds are more seasonal than others. Small ruminants are short day breeders, so as day length becomes shorter, they start to go into estrus. If a female is born in August (i.e. her mother was an exception and was not seasonal), then if that female kid/lamb reaches between 50 to 60 percent of her mature body weight by January, she could come into puberty and breed.

However, if a ewe has a lamb in January or February and if her daughter hits that 50 to 60 percent mature body weight by 5 or 6 months of age, it will be July or August, when day lengths are long, therefore she will probably not come into puberty until 7-plus months of age. Also, depending upon forage conditions, she may have dormant grasses that have lesser energy and will not have that “flush” of energy, at least in fescue country, until later in the fall. Again, lots of factors go into this.

Males are not as seasonal, but day length does affect them as well, just to a lesser extent and it may not even be noticeable – they may have a few million less sperm, but it only takes one viable sperm to produce a fetus, so we may not even notice the effects.

Walker also noted maturity and reproductive factors will also vary from breed to breed, but that hitting the 50 to 60 percent of mature weight is a target with any breed.

At what age producers breed their sheep and goats will depend on production goals and individual experience.

“It all depends on what your end product is, your labor needs, forage availability, etc,” Walker said. “There is no perfect time for breeding/kidding/lambing; people just have to think about when they want to sell their animals and manage backwards.”

Walker explained some breeders would never even think of breeding their lambs/kids until they were at least 12 to 18 months of age. Others leave the buck/ram out year-round and let nature decide who breeds and who doesn’t. Which way is better? They are both with merit, according to Walker.

Letting females mature in both age and size has benefits. Lesley Million, with Terrell Creek Farm in Fordland, Mo., said of her dairy goats.

“It’s best to breed after a doe is at least 100 pounds and around 18 months old. This will help ensure that a doe is both physically mature enough to kid and mentally/emotionally mature enough to be a good mother to her kids,” Million explained. “Besides not caring for her kids, a doe that is bred too early may have difficulty giving birth or developing a decent udder.”

Walker noted females who have been allowed to age will likely breed back sooner.

“If you breed the females younger than a year, you get a faster return on investment, quicker genetic turnover, but probably smaller initial weaning weights, but not always, which allows you to really find the females that excel in mothering and reproductive traits,” Walker said. Females that are bred “early” may not be the largest, but chances are if they are thrifty and reproduce well at a younger age, they will be good money makers. It will always vary from farm to farm.

http://www.ozarksfn.com/2019/10/21/breeding-sheep-and-goats/2019-10-17T16:23:25-05:00Klaire HowertonFarm Helpbreeding,Goats,sheep,small ruminantSmall ruminant reproduction is not  “cut and dry,” according to experts As the days begin getting shorter, sheep and goat producer’s thoughts will turn toward breeding their herds and flocks. Female sheep reach sexual maturity between 6 to 12 months, and female goats between 4 and 12 months. However, when to...Klaire HowertonKlaire Howertonklairebruce@gmail.comAuthorOzarks Farm & Neighbor Newspaper
breeding, Goats, sheep, small ruminant 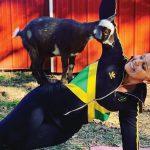 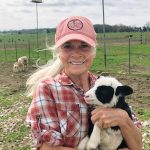 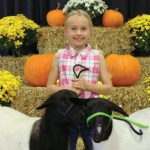 Growing Up With Dorpers