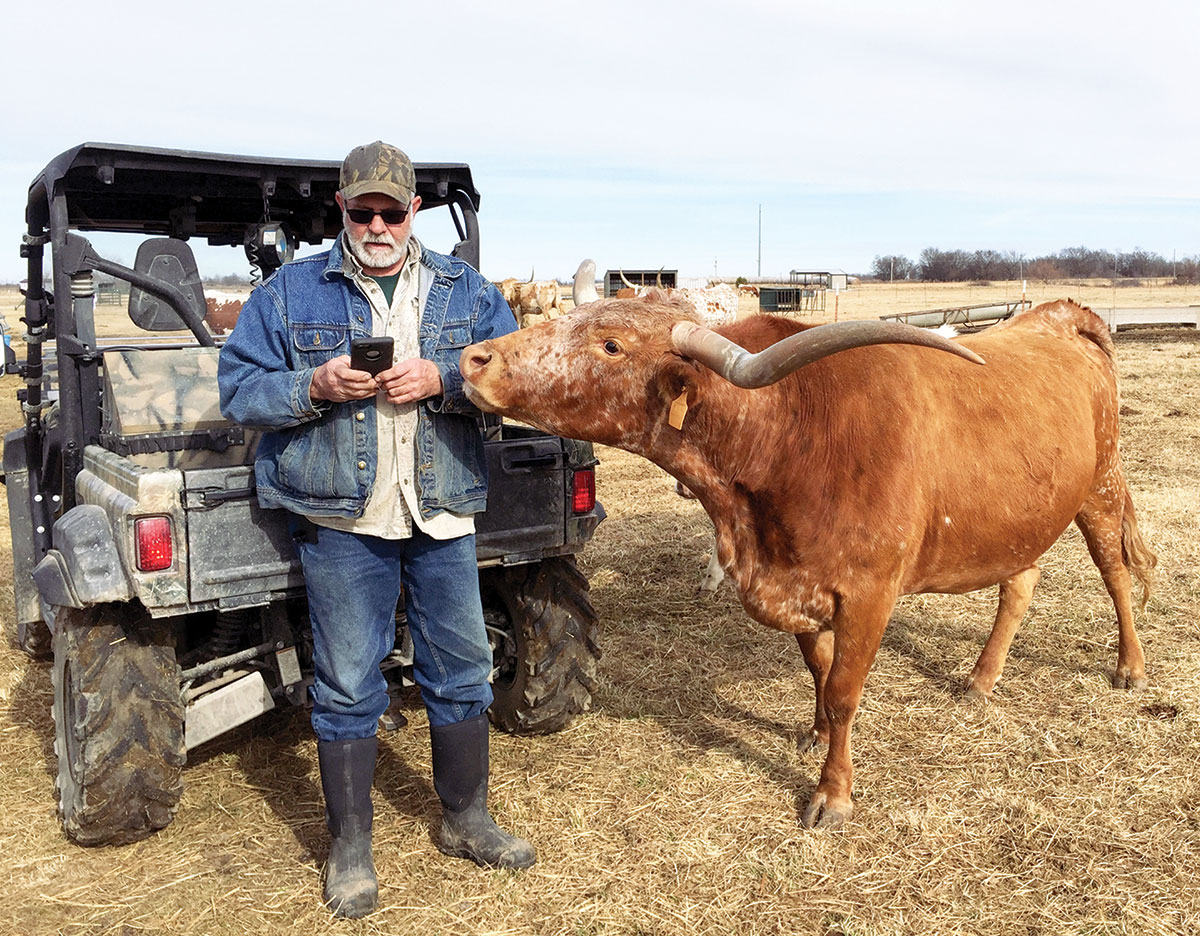 The Franciscos opted for Longhorns after researching the breed

Dale and Gina Francisco are first-generation cattle farmers who established their farm in 2012 in Miami, Okla.

Dale’s family lived in town in Miami, but had a Shetland horse they bred annually, fowl and a garden they grew yearly. Gina grew up in central Illinois, but not on a farm.

“Dale and I purchased cattle because we wanted to raise our own healthy beef,” Gina said. “One of Dale’s friends, who had raised and shown beef cattle previously, was interested in the same thing, and had contact with folks with a Longhorn herd.”

Dale and Gina began researching the health benefits of Longhorn beef, and decided to keep three – one bull, one cow and one calf – and started to look for their own animals.

The original three grew to 11 the first year, with the thought of maybe showing some. By the second year, they had more than 20 head, and the herd continued to grow.

They are now running 78 head of Longhorns on 60 acres at their ranch in Miami.

“We all joke that you start with a few, you ‘catch the bug’ and end up with a pasture full of unique, magnificent animals,” Gina said.

“Originally, we picked Longhorn cattle because the meat is so healthy, and they are disease resistant, as well as easy to raise,” Dale said.

The couple has since “fallen in love” with the breed because of their personalities, ease of raising, and the people they have met in the business.

The Franciscos breed from April to June, but as they have purchased bred cows with varying calving dates. They have progressed to year-round breeding and calving. Dale and Gina, however, like to avoid February and March, when possible, because of the weather.

In addition to growing their Longhorn herd, the Franciscos have made their way to the showring, and breed their females at various times to have cattle in multiple classes.

While some may consider Longhorns a niche market, some cattle producers prefer to breed their first-calf heifers to a Longhorn bull for calving ease and quick growth.

Longhorns are a naturally hearty breed, with higher immunity and less health problems than some breeds of cattle.

The Franciscos do calf hood immunizations at 4 to 6 months for all the calves, and all heifers get their OCV (Official Calfhood Vaccination) at that time.

The herd is wormed and vaccinated twice a year, and given an annual multi-mineral. Antibiotics are only administered if an animal is ill, which is uncommon in Longhorns.

“We try to promote their natural immunities and want to keep the meat as close to organic as we can,” Gina said. “Our cattle are primarily grass fed, with some natural feed supplement since we have too many cattle. We also raise our own hay, so we know its content.”

The Franciscos sell their cattle for meat, showing, breeding or for cow/calf operations. They sell most of their animals at Longhorn sales and through private treaty .

Some have been for “pasture art” to folks who enjoy looking at the breed, some steers for pasture clean up (they will clean a pasture like goats, according to the Franciscos), and a few bulls have been sold to beef producers to use on first-calf heifers. Most recently, they have started to sell some animals directly for individual butcher for the lean, healthy meat. They have butchered several for their own meat and say they have “gotten spoiled” with the quality.

“The advantage of Longhorn cattle is that they have small calves that gain quickly, but rarely have calving problems, they are naturally healthy, they forage on anything and still gain,” Dale said. “They are very intelligent, learn quickly and are generally pretty calm, as well as being beautiful to watch, their meat is leaner than chicken, and they are easy to raise.”

A disadvantage of Longhorn cattle is that a specific chute with horizontal bars is needed to work them easily, without damaging their horns. It aslo takes more trailer room to travel with them.

A misconception about the breed includes fear of aggression because of their lengthy horns.

Dale and Gina spend a great deal of of time with their cattle. Starting at weaning, calves are kept in a corral with halters for a couple weeks. There is human interaction daily with the calves, be it for a good brushing or a few calming scratches to get them acclimated to people, and associate Dale and Gina with feed and treats.

“Offer treats often,” Gina said, adding that the use of feed and treats allows the cattle to move without the use of cattle sticks or other persuasive measures.

“We want people to find out how gentle our cattle really are,” Dale said.

« Stumping for Beef
Selling vs. Marketing »