Typically, when producers discuss Expected Progeny Differences (EPDs), they are referring to the bull.

Depending on the cattle operation and the desired outcome for the herd, EPDs for the females can be helpful records as well, as can genomic testing.

“Registered cows will have EPDs if the breeder participates in the breed’s whole herd reporting program. Seedstock producers use them in the same ways as you would bull EPDs, using them as a tool for buying and breeding decisions in an effort to optimize the herd’s performance in the various categories measured,” Andy McCorkill, University of Missouri Extension livestock field specialists, explained.

Commercial cows can have EPDs as well, but sometimes other forms of gathering data might be a little more accessible to the commercial producer.

“For the commercial cattleman, it (EPDs) probably isn’t an option for the entire herd,” McCorkill said. “That being said, there are other similar options available that can be quite useful. For one, commercial cattle genomic profile data can be used to evaluate the same criteria that EPDs do, giving a numeric comparison of an individual to benchmark averages. Commercial panels are becoming more widespread and lower in cost as the technology improves and becomes more commonplace.

“There are a number of options for commercial producers, some from breed associations and others from private companies. Select the option that best fits your herd’s breed make up, needs and price point.”

Once a producer has data in hand on their cows, either in the form of EPDs or genomic testing results, they must make sound breeding and management decisions based on the information for it to be a good investment. This is where putting the cow’s results up against the bull’s EPDs or genomic test results comes into play.

Producers can make appropriate selections for their herd by identifying strengths and weaknesses based on their test results, and by choosing a bull that can compensate for their cow’s weaknesses, Dr. Jared Decker, Beef Geneticist with MU Extension, explained. Utilizing test results in such a way will help the producer get a good return on his or her investment. 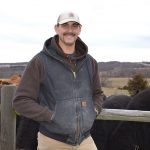