A Heart in Farming 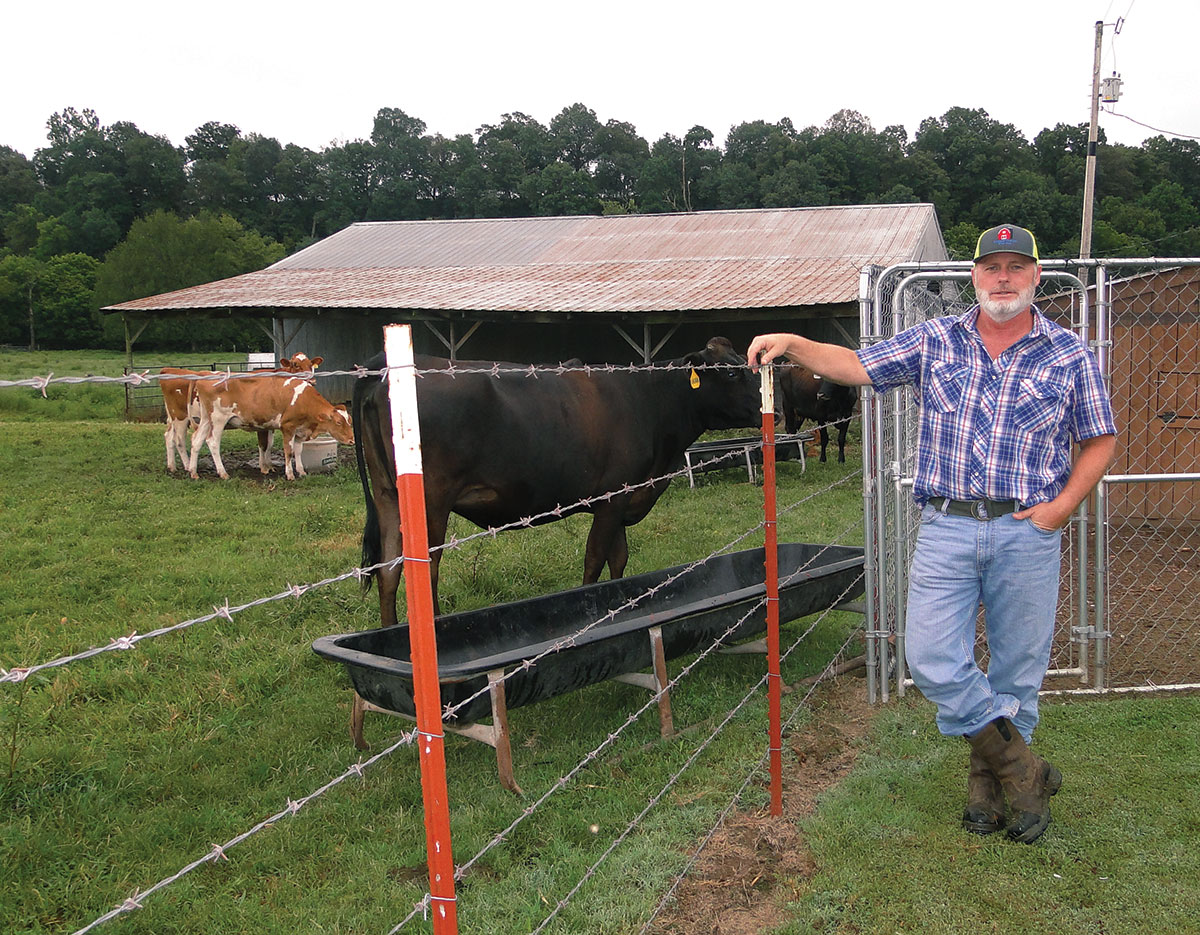 Brian Austin runs an Angus operation, but longs to return to his dairy roots

Brian Austin of Lincoln, Ark., is one of those people who went to college to earn an agricultural degree with the intent of working the rest of his life on the farm. When the 100-cow dairy farm was unable to support his parents, his brother’s family and himself, Brian was the one to leave the farm and work in town while the dairy herd was sold and his brother began a feeder cattle operation.

Though Brian’s degree was in dairy science, he began his town career as a dispatcher for a trucking company. He was subsequently hired as an account manager for BNSF (Burlington Northern Santa Fe Logistics), a position he still holds.

Brian’s grandparents, Shelby and Jewell, left Texas and settled in Lincoln in 1952. The family history has been difficult. First, the farm was struck by a tornado in 1971 although, fortunately, two large hay barns from the late 1800s survived. While Grandma Jewell and Brian sheltered safely in the house bathtub, Grandpa Shelby was picked up and thrown a few hundred feet, but survived. In that year, the house was rebuilt and a new dairy barn was constructed.

Both Brian’s father John and his brother Ken passed suddenly in 2017.

“I had to find a place for my grief, that space often involved walks with the cows – they seem to listen very well.” Brian said.

In spite of the tragedies, Brian’s love of the land and agriculture were strong. He can’t remember a time during his childhood when he wasn’t excited to get up early and milk cows with Grandma Jewell. He had his first Holstein bottle calf named Lulabelle when he was only 5. He would hurry home from school and spend hours with the calf in a separate pen and later milked her for years. His uncle, Lonnie, married to his father’s sister Mary, rounded out his understanding of farm life as they walked side-by-side throughout his childhood.

Because time would be a severe limitation, Brian bought the house and 100 acres of the original homestead while the rest of the 350 acres was sold. He wanted agriculture in his life until he can hopefully farm full-time again in the near future.

The land is an excellent piece of property and contains multiple underground springs with every pasture having a fresh water source.

Austin Farms echoes the old self-sustaining farms of years ago. In addition to his cattle operations, Brian has 40 chickens, mostly Black Copper Marans.

He produces eggs, some of which he sells with the rest going to friends and neighbors and personal use. He feeds a commercial laying pellet and scraps from home. He also provides yard clippings and occasional hay, which they use to search for seeds.

Brian feeds his chickens in the morning and the evening, but harvests eggs every afternoon with production ranging from two to five dozen at a time, a schedule made possible by his 6:30 a.m. to 3:30 p.m. town job.

The chickens have a laying house with five nesting boxes and are cooled in the summer with a fan. Because his childhood was filled with all kinds of poultry, Brian also maintains a flock of geese and ducks.

“Geese are messy and the flock size is starting to get out of control,” admitted Brian. “But I enjoy them. They have always been a part of the barnyard.”

The final production component of Brian’s farm is a herd of 50 Angus cows and two Angus bulls. Because the farm is a one-man operation, the bulls stay with the cows year round. Calves are grass fed with supplemental hay and high mag mineral blocks. Brian retains four replacement heifers a year and keeps the herd size at 50, due to space and time constraints. Bulls, however, he changes every two or three years to keep the genetics separate.

Brian’s true love is dairy, which goes back to his grandparents. When registrations are required, he operates under the prefix Golden Jewell Guernseys, named after his grandmother, and he plans to enter into  the raw milk market more extensively.

He currently has eight Brown Swiss milking cows, and Brain is allowing them to raise their calves. Additional milk is used for bottle calves and is sold to a few buyers.

Brian also has 10 registered Guernsey heifers that will calve in February 2020. He selected the breed because of the gentle temperament, their milk’s high butterfat content and the breed’s self-sufficiency.

“The only disadvantage is that dairy bulls, especially Guernseys, are highly dominant and have to be watched all the time,” Brian said.

Brian raises his own hay, but, because of time, he has somebody harvest it, including an additional 25 acres he leases on shares. Brian usually raises sufficient hay for his needs but will occasionally buy hay from his aunt, Mary, who lives across the road. Pasture composition is Bermuda and fescue with a good stand of clover and some native grass. Sufficient moisture and fertilizing usually means he doesn’t need to over-seed.

“One of the things I’ve learned about being a small producer is you have to keep expenses to a bare minimum so I don’t over-seed and I don’t spray for weeds, but brush hog and clip, a process that also keeps my clover strong,” Brian explained.

Health protocols are simple with vaccination and worming twice a year, supplemented with back rubs for fly control. All cattle, both commercial and dairy, are grass fed with a little grain used as a supplement during winter, depending upon weather and hay quality.

“Everything about this operation is geared toward maintaining a lean overhead and promoting time efficiency. Consequently, calving ease is my top priority with my beef cattle. People laugh when I say I want to milk cows when I retire, and I figure whether it’s one cow or 100, I can call myself a dairy farmer. That way I get to be what I wanted to be when I grew up.”

http://www.ozarksfn.com/2019/12/05/a-heart-in-farming/http://www.ozarksfn.com/wp-content/uploads/2019/12/BrianAustin-1024x798.jpghttp://www.ozarksfn.com/wp-content/uploads/2019/12/BrianAustin-150x150.jpg2019-12-05T08:59:41-06:00Terry RoppArkansas NeighborsNeighborsAngus,Arkansas,Austin Farms,Brian Austin,Cattle,Dairy,LincolnBrian Austin runs an Angus operation, but longs to return to his dairy roots Brian Austin of Lincoln, Ark., is one of those people who went to college to earn an agricultural degree with the intent of working the rest of his life on the farm. When the 100-cow dairy...Terry RoppTerry Roppterrymerrill@hotmail.comAuthorOzarks Farm & Neighbor Newspaper
Angus, Arkansas, Austin Farms, Brian Austin, Cattle, Dairy, Lincoln