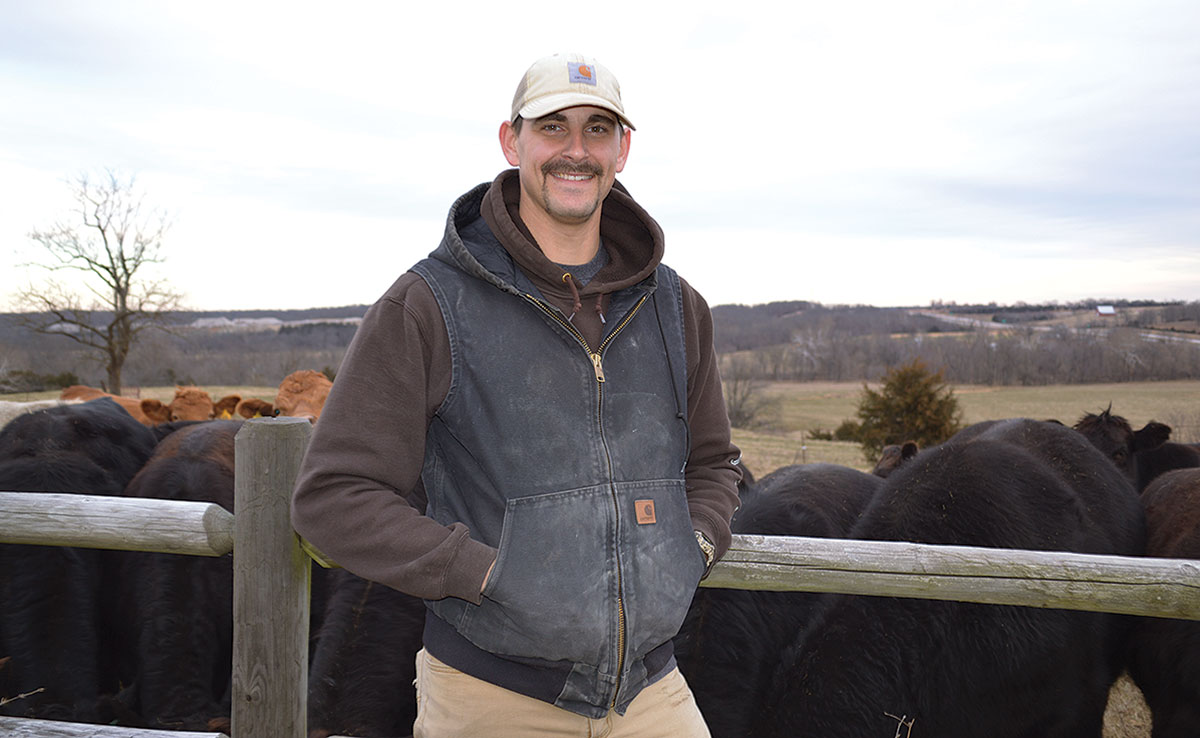 The saying, “Out with the old and in with the new,” typically accompanies thoughts of a new year, but it also encompasses Matt Loyd’s approach to taking over his family farm. Five years ago, Matt decided he would give Loyd Farms a major overhaul.

Though the 27-year-old made big changes, he moved forward with a commitment to preserve the farming wisdom of his great-grandfather, Dick Mason, and grandfather, Paul Mcnealy. Loyd Farms started in the 1930s as a dairy operation on 300 acres of rolling pasture near U.S. 65 in Fair Grove, Mo.

The Loyd family transitioned their operation from dairy to beef cattle in the mid-1990s. In recent years, Matt has focused on improving the genetics of the commercial cattle herd.

“Since I got involved with the farm, I have been getting rid of the old and coming in with the new,” Matt explained. “I have been trying to improve our genetics with more Angus influence because they are the most versatile cow out there in my opinion.”

Matt started by selling some of the family’s mixed commercial cows and replacing them with Angus-based commercial heifers. He visited numerous area farms and met with beef producers to carefully select the replacement females. He’s added 40 heifers to his herd of 40 commercial cows.

When it comes to finding the right replacement heifer, Matt first looks at the heifer’s sire’s milk EPD.

Genetics and EPDs are a part of the cattle business that Matt especially enjoys.

“I like building a product,” Matt explained. “I like looking at the genetics of the bull and seeing that come to play during calving season.”

Bull selection is a critical component of Loyd Farms’ business model. Matt purchases all his herd bulls from known, successful Angus breeders in Southwest Missouri. “I only buy bulls off the farm. I will never go to a sale barn and buy a bull, you just don’t know what you are getting,” Matt said.

Additionally, Matt exclusively buys from local breeders to ensure his cattle have adapted to the climate and terrain of the Ozarks. “If you buy out-of-state or up north where they don’t have rocks like we have here in Southern Missouri they will have foot problems,” Matt stated.

Though he enjoys the challenge, Matt says bull buying can be tough.

Once he selects a herd sire, Matt works to ensure they are in good health and condition. Every fall a veterinarian checks Loyd Farms bulls’ fertility and scrotal size, and trims their feet.

“We want to be confident they will do their job when we put them out – that is the most important thing,” Matt said.

Part of Matt’s philosophy includes investing in quality feed for his herd. For example, first-calf heifers receive a high-energy feed from Main Street Feeds in Springfield, Mo., to give them a boost of energy for 90 days after calving.

“They are growing and feeding a calf at the same time, so they need a little extra help,” Matt explained.

As soon as the calves are weaned, Matt feeds them Purina PreCon for 20 days and then transitions them to MFA Cattle Charge.

Currently, Loyd Farms markets its calves at Springfield Livestock Marketing Center when the animals reach about 650 to 700 pounds.

Matt prefers to grow out his replacement heifers to 900 pounds. This ensures the replacement females are in good condition for reproduction.

“I want to make sure they are ready to breed when they are at the right age and weight. If you breed them when they are too young, you are going to have problems,” Matt said.

Loyd Farms plans to keep some of its replacement heifers and sell the rest to other producers. Matt also plans to start a Red Angus herd in the future.

Though Matt admits balancing work on and off the farm can be a bit of a challenge, he wouldn’t have it any other way. The farm is where he finds peace and fulfillment, just like his grandfather and great-grandfather.

« Making a Mark
Are You Ready for Winter? »