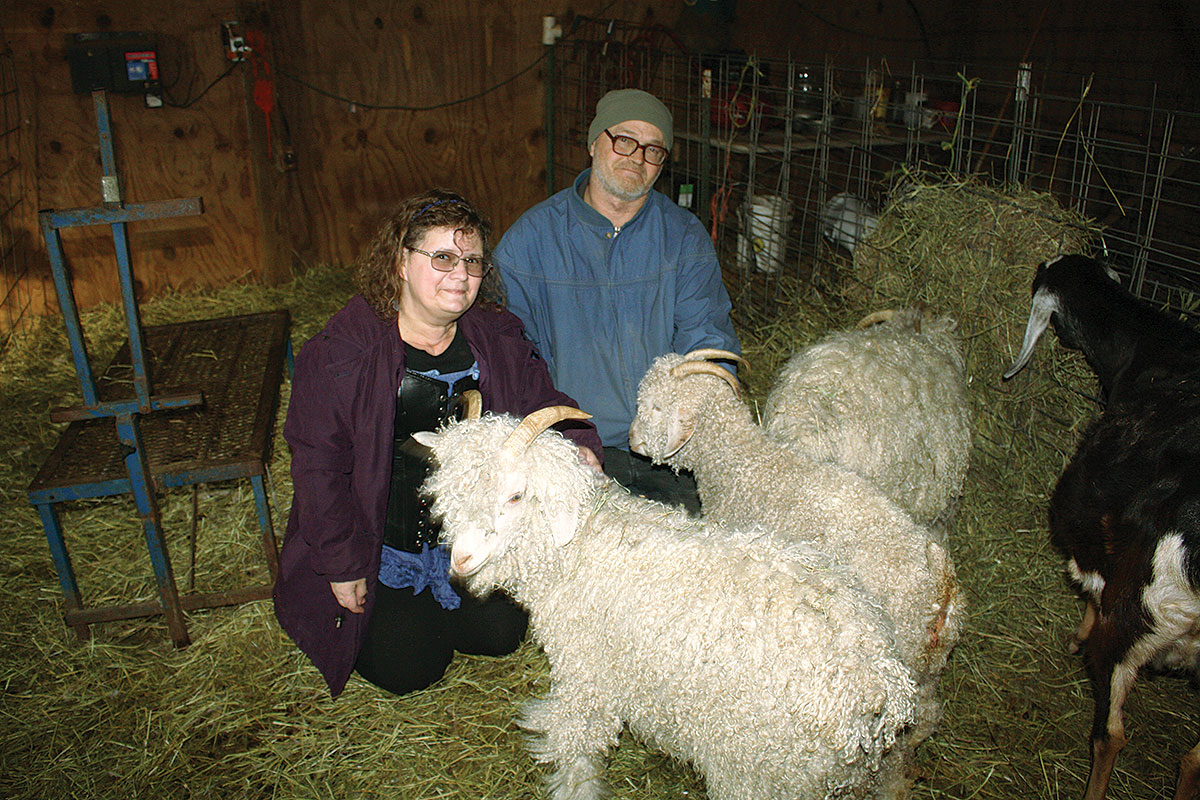 After a career in the military, Roger Thomson and his wife, Jarita, began to contemplate their next and final move.

“She asked what I wanted to do, and I told her I wanted to go out in the middle of nowhere,” he said. “So she got me a farm and I love it.”

At their A Mystical Farm near Norwood, Mo., Roger and Jarita raise registered Angora goats.

They began the farm with Pygora goats, a breed that originated with the crossing of Pygmy and white Angora goats, but moved to the white Angora about five years ago. White Angoras have been bred in Texas since the 1800s.

“They have been bred to have the most incredible fiber,” Jarita said of her herd, which numbers around 30 head.

On average, each animal produces 4- to 8-pound fleeces every six months, which can command a price of $50 per pound. The fetching prices for processed mohair varys on the amount of processing.

Like wool, the mohair produced by Angora goats has different grades, which demand different prices. Jarita explained that “kid” grade is actually the softest and, in angora goat herds of the past (before quality breeding programs) and herds that don’t focus on “next-to-skin-soft,” it is regarded as the mohair from a kid up to about a year old. “Yearling” grade is also next-to-skin-soft and, in unimproved herds, is produced up to about 2 years of age.

“Most of our goats continue to produce ‘kid’ grade up to about to 4 to 6 years of age, at which time, we start to see it advance to ‘yearling’ grade,” she said.

Bertha, one of the couple’s foundation does, is 8 1/2 years old and still grows a yearling-grade fleece.

“She grows a fleece as soft as a 1-year-old,” Jarita explained. “All mohair, all fibers have their uses, but the only fiber considered next-to-skin soft is the yearling grade because it is under 30 microns (the measurement used to express the diameter of fiber). In Texas, they have realized that through quality breeding, they can get older animals, like Bertha, to produce yearling-grade mohair. That’s one of the reasons we have stayed with the white Angora; we want to focus on next-to-skin softness. If you want mohair for your saddle cinch, you don’t want kid mohair, you want adult mohair.”

No Mohair produced at A Mystical Farm is an “adult” grade.

The first shearing is about 6 to 8 months of age. Roger handles the shearing chores, as well as hoof care. Some of the goats at A Mystical Farm are sheared every four months because of the growth rate of their fleece.

“We want a staple of between 4 and 5 inches,” Jarita explained. “That has to do with the usability. Most of the mohair gets sent to a mill (in Iowa) for processing, turned into roving or yarn. The mill prefers to process on a 4- to 6-inch staple.”

Once the processed mohair is returned to A Mystical Farm, Jarita will dye it a variety of bright colors. She then turns to her spinning wheels to create custom, hand-spun yarns. The yarns she creates are one-of-a-kind items, items that can never be replicated by a machining system.

Customers can purchase raw mohair, skeins and cakes of the finished yarn, or items Jarita has created, such as scarves, hats, mittens and shawls.

In addition to genetics, proper nutrition is critical for the production of high-quality mohair.

With the use of a fodder machine, Roger sprouts barley for the herd.

“They get between a pound and a pound of half of fodder each day,” Roger explained. “Then they get 2 to 3 pounds of hay a day as well. I will mix in some mineral, sea kelp, sunflower seeds, alfalfa pellets and some Calf-Manna. They are kind of spoiled.”

“Like any livestock, the better the feed, the stronger and healthier the animal is going to be and the better their production is going to be,” Jarita said. “That’s if they are producing milk, meat or fiber. If you feed better, they produce better.”

Angora goats are seasonal breeders, with the season running from September through January.

“We put the bucks in, without the aprons, from September through the end of November,” Jarita explained. “We will start having babies in February, running through April. Any bottle babies we have will go up for sale immediately.”

Angoras, Roger explained, have very small teats and udders, and do not produce a great deal of milk, making it difficult for a doe to raise twins.

“They might be able to produce enough for two, but the kids don’t thrive,” Jarita added. “They are better off to go as bottle babies.”

Angora goats are more susceptible to parasites than some breeds, so the couple has implemented a rotational pasturing system, as well as monitoring for issues by following the FAMACHA scoring system, using all-natural or herbal remedies if needed.

“It’s usually only about 10 percent of a herd that has issues,” Jarita said. “If we have to use a chemical wormer on more than one occasion, we will move that animal on down the road.”

The Angoras, according to Roger and Jarita, are also prone to issues if chemicals are used for weed and pest control, so A Mystical Farm is chemical free.

Because of the isolation of their farm and being a closed herd, Jarita and Roger do not have a vaccination protocol in place, but work closely with their veterinarian to ensure animals are in optimal condition.

In addition to fiber production, the Thomsons also sell stock to other Angora producers. If a male is wethered, it is sold as a fiber production animal or as a buck companion.

“We want good conformation on the bucks, and I look at overall production,” Jarita said. “At their first shearing at 6 months, they should be giving 2 to 3 pounds of mohair. If they give me a pound, I’m going to look at why they gave me that pound. If they don’t have the density, I will wether them.”

“We’re pretty picky about our genetics,” Roger added. “We only retain about 10 percent. I’ll raise all bucks up to a year now so I can get a good look at them and determine if they are going to be good enough to be used as breeding bucks.”

“It can be salvaged, but it’s not worth it,” Roger said of the bucks and their strong, musty odor.

Smaller fiber flocks are typically the buyers of stock from Jarita and Roger’s breeding program. Some of their bucks have also gone into larger production operations.

“If you take momma and baby, they do much better,” Jarita said. “If a customer wants a kid, but not the momma, the kids are raised here until 4 months of age; I won’t pull one earlier. I would rather leave them together for the first six months.”

Three llamas protect the herds, and also give the couple yet another fiber source.

As for the future, Jarita and Roger want to simply enjoy their farm and their animals.

“We’re looking at keeping our herd about the same size, somewhere between 30 and 40,” Jarita said. “We want to continue to improve their constitution. We’ve talked about adding sheep, but we haven’t decided on that. We’re enjoying what we’re doing.”

« A Step Back in Time
Tips to Shortening Calving Intervals »