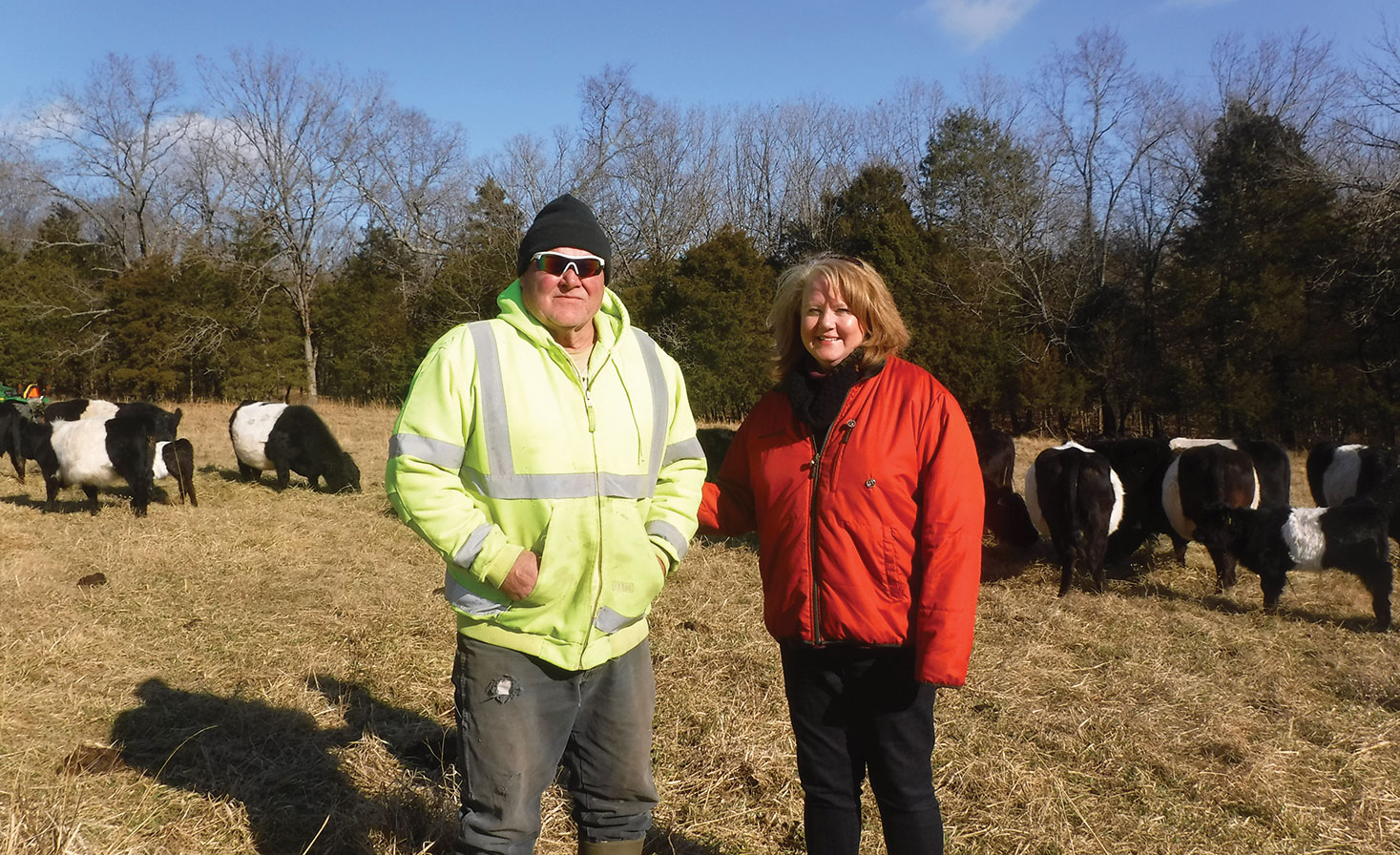 “You have to love the lifestyle,” Myra Franks said when talking about raising Belted Galloway cattle with husband Tony on their 141-acre farm in Rolla, Mo.

Myra is originally from southern Illinois; Tony is an Alabama native. Myra attended College of the Ozarks, and her parents relocated to Missouri after years of vacationing there when she was a child.

Belted Galloway cattle originated in Galloway, Scotland, and comes in the more common black with a white belt, or red dun with a white belt. “Belties” as they are affectionately called, are known for docility and the high-quality of meat produced. They are a hardy breed, which can convert many types of forage into delicious meat.

Nutritional studies done in 2009 have shown that Belted Galloway meat surpasses USDA standards for both grain-finished and grass-fed beef.

“I just became enamored with the breed and their appearance,” Myra said.

She became more interested in them 13 years ago on a trip to the Netherlands, where the breed is popular. She and Tony bought three heifers in 2006, and from that the herd has grown to 56 cows total. Myra and Tony are fond of their cow herd, and every cow has a name.

The couple are proud of their cattle, with good reason. In July 2016 and 2018, BMP Farm had their animals featured at Purina Farms, just outside St. Louis, Mo. They have also been featured on the Belted Galloway website, www.belties.com.

The couple’s path to raising Belted Galloways has been a long one, and they have taken turns being on the farm, with Tony working in Alaska, while Myra ran the operation by herself for nine years.

Currently, Tony cares for the cattle, while Myra lives much of the year in Fairbanks, Alaska, where she is employed as a special education teacher.

“It gets very cold there,” Myra said smiling. She enjoys being at the farm, and being around the cattle, through she only manages to come home when she is not teaching.

Tony has worked in Alaska as an industrial insulator, which included working in power plants and metal refineries.

The cattle are l00 percent grass fed, mainly fescue, with hay that includes clover in the winter.

“We have enough animals we don’t grow our own hay,” Myra said. They purchase hay from Jeremy Gargus, in St. James, Mo.

Myra and Tony make sure the cattle receive all necessary vaccinations.

The Franks use live cover for breeding, though they lost their bull last summer, and plan on replacing him. The process for registering a Belted Galloway bull is extensive and requires DNA testing. They also offer breeding stock for sale.

“It would be nice if it wasn’t so labor intensive with the marketing. We direct market everything ourselves,” Myra said.

In addition to having a website, the Franks advertise their beef on Craigslist. The meat is processed at Swiss Meats in Herman, Mo.

Their beef is popular, with customers coming from as far away as St. Louis to buy the Franks’ meat.

Both Myra and Tony were quick to point out the benefits of living an agricultural lifestyle, that they wouldn’t change.

“The farm has its own rhythm,” Myra said. “You think you are doing one thing, and you end up pulling a calve.” Myra feels the best part of the lifestyle is being able to be outside, and watching the animals grow.

With the growing popularity of Belted Galloway meat, and strong marketing campaign, the future of BMF Farm seems secure.

The couple also owns 40 acres in Delta Junction, Alaska, that it is not currently being used for farming.

The original tract of land was much larger and was originally a dairy operation. The Franks have farm paperwork that goes back to the Louisiana Purchase. A lover of history, Myra has kept some of the original records from the farm’s early days, which she proudly displayed, explaining each one’s original purpose.