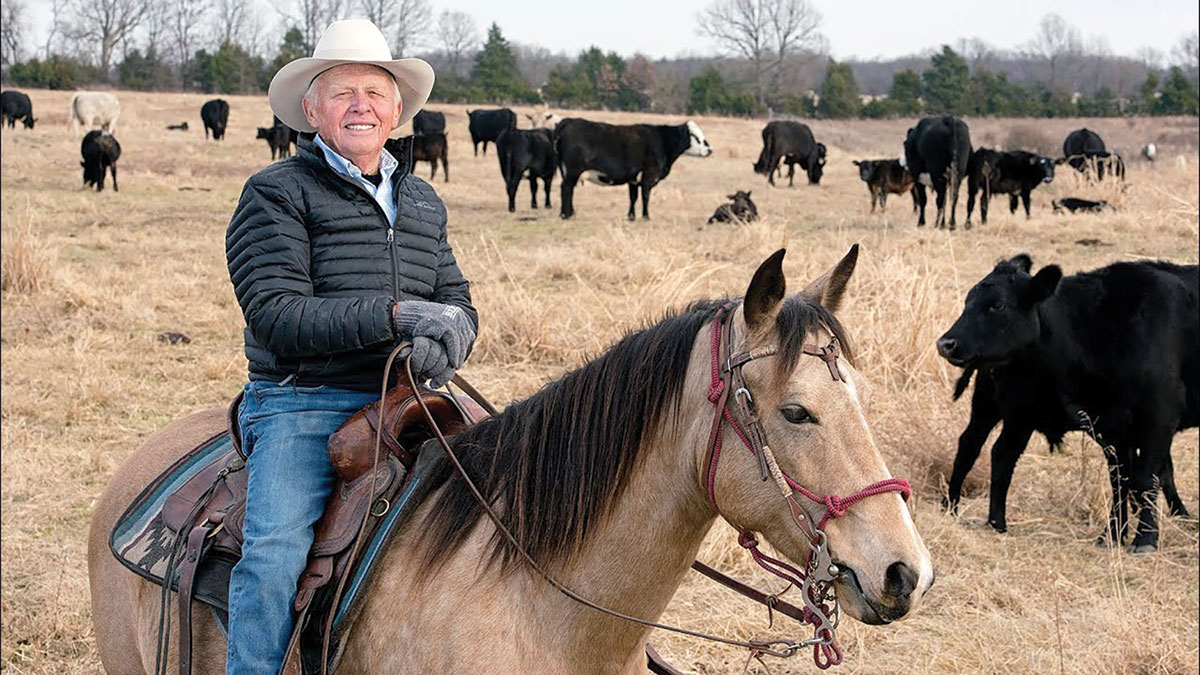 Wearing his signature cowboy hat, Morris Westfall can be found most days on his rural Halfway, Mo., farm.

The Polk County, Mo., native has been many things in his 80 years, but these days he considers himself a self-employed livestock producer, having raised cattle, hogs and sheep most of his life.

Morris’ father was a storeowner, not a farmer. His family didn’t own much land, only about 20 acres, but Morris loved working with livestock.

“When I graduated from high school, I had 30 old ewes,” Morris said. “I actually intended to raise registered Hampshire hogs. In school, I learned a lot about nutrition and genetics, but actual care and day-to-day operations I learned from an older neighbor.”

Upon graduating from the University of Missouri-Columbia with a degree in animal science, Morris became a field representative for the Hampshire Hog Association for two years, then the farm news director for KWTO in Springfield, Mo.

It was during his time at the radio station that Morris became a pioneer in the Missouri cattle industry.

For his work in the cattle industry and his support of agriculture throughout his career, the Missouri Cattlemen’s Association recently presented Morris with its Pioneer Award, the highest honor given by the organization.

“I was overwhelmed,” Morris said. “I just figured what little I had done was so long ago that no one remembered.”

Morris said he didn’t know he had won the award prior to the convention, but he had been asked to do a video, which he assumed was to promote the association.

The video depicts Morris riding his buckskin horse through his herd and sharing his thoughts on membership.

“It took forever,” he said with a laugh. “I’ve got a good horse, but we had to do two or three poses before (the videographer) got it. Then we went to the barn and he interviewed me. It was time to make the award at the convention and I saw Keith Stephens heading to the podium, so I thought there was a chance I was getting the award, but I didn’t want to get my hopes up. They started the film and the first thing that showed was the tip of my horse’s ears. It was a little emotional.”

Efforts to support cattlemen and agriculture were not limited involvement with the Cattlemen’s Association or his farm broadcasting days. Morris also served in the Missouri House and Senate, where he advocated for agriculture and transportation, among other issues.

Hog facilities at the Westfall family farm were nearly complete when Morris’ father Johnny passed in 1971. The elder Westfall was elected to the Missouri House of Representatives in 1968, serving until his death. In a special election, voters in district tapped Morris to replace Johnny, thus beginning his legislative career. Morris served one year to fill his father’s term, then ran for election in 1972, all the while continuing his farming operation.

“I was out at the Louisburg Picnic, when a state patrolman found me and said I had hogs out on Highway H,” Morris recalled. “I say this jokingly, but I told the Lord if he would let me win this election, I’d get rid of the hogs. It turned out OK because I found I liked and enjoyed the opportunity to serve and be involved. We had almost finished the Hampshire hog facilities, but the hog markets started to change, so I started running a small commercial cattle herd.”

Morris served in the House until 1981 when he became state director of ASCS-USDA, now the Farm Service Agency. He was elected to the State Senate in 1994 and served eight years.

Upon leaving the Senate, Morris expanded his cattle operation and bought some Charolais cross cows. Genetics from some of those those Charolais remain, but Morris has opted to go with the development of black Maine Anjou-influenced herd. He runs about 90 cows.

Throughout his lifetime, Morris has seen the evolution of cattle marketing. From the early days of cattle being sold in the alleys of Union Stockyards, to the heyday of the Kansas City Stockyards, Morris said those were the only locations to sell cattle at a good price, but the evolution of local barns has brought viable markets closer to home for most producers.

The quality of cattle sold has also improved as more producers look to higher-quality genetics, improve health protocols and the overall quality of feeder cattle at marketing time.

“They called cattle coming from Springfield, Southwest and South Central, Mo., yellow hammers,” Morris recalled with a laugh. “They called them that because everything was part Jersey and their meat was yellow. Jerseys don’t yield the best and have trouble grading Choice. It took a long time to live that down, even after we started producing good cattle.”

The face of agriculture is also evolving in the Ozarks.

“We’ve gone from dairy to beef,” Morris said. “This is grazing country, and for many years we went away from corn and soybeans, but they are making a comeback on good ground.”

Morris has his “old-age plans” for his cattle operation, which includes buying replacement cows instead of raising heifers. He also plans to continue being an advocate for Missouri and the cattle industry.

“I think everyone who raises cattle needs to be involved in the Cattlemen’s Association,” he said. “You might not agree with it all the time, but we need more members to express our thoughts. We don’t have the percentage of producers we should have in this part of the state, based on our inventory. Having been in the legislature, I think everyone needs to be a member of the association that relates to their vocation. There’s always someone who thinks they know what’s right for your industry, but that might not be. This carbon-kick and sustainability is for real, and we have to be able to address these things, so we need someone from the Cattlemen’s Association to be at the table.

“I think we are already sustainable and the idea of getting rid of cows to save the polar bear is just silly, but there are people out there who are concerned about that, which is where the Cattlemen’s Association comes in. I’ve made immense improvements to our soils and grasses since the 1970s, so I think we’re doing a pretty good job, but critics don’t see that. We can’t turn our backs on the concerns of our city cousins.”