Moving on With Wagyu

Teddie Andrews and her family mix Angus and Wagyu bloodlines

Many women in agriculture work side-by-side with their husbands, fully immersed in the day to day work of running a farm. Such is the case with Teddie Andrews.

When farming full-time would no longer support the family, her husband Robert got a general contractor’s license and worked off the farm. Teddie handled whatever needed to be done while he was gone. Then, Robert unexpectedly died in May 2019 of a heart attack.

Both Teddie and Robert were raised on farms and had been best friends since Teddie was in ninth grade and Robert in seventh. When Robert was 16 in 1975, he went with his father to the bank and bought his first farm for $55,000. It was a 40-acre spread that included two chicken houses, two wells and a residence. Excited, Robert told Teddie at church the next Sunday that he bought her a farm. Teddie was astounded because Robert was younger, shorter, and had already assumed they were getting married.

She did not consider her best friend a boyfriend. In fact, Teddie was so shocked she didn’t speak to him for three months.

“God knew what he was doing and gave me my best friend for a husband and a beef and chicken farm,” Teddie said. “It was a good thing he already had acreage because my mom said I couldn’t leave home unless I took my horse, too.”

The couple married when Teddie was 20 and Robert was one month over 18. They raised three children who produced six grandchildren so far, ages 3 through 10.

“Robert could not have possibly left us in better shape,” Teddie said. “Our entire cattle system was already firmly established, and because I did so many of the day-to-day tasks as part of our lives, I had the necessary practical experience.”

Teddie and her son Russell run 110 mostly purebred Angus cows bred to five fullblooded Wagyu bulls on 300 acres outside of Gentry, Ark. They purchase most of their bulls from Rowe Wagyu, in Lincoln. The combination produces F1 calves that are highly prized for meat quality.

Calves are sold to the same buyer every year, with the buyer determining which bulls the farm purchases. The buyer also has criteria related to health protocols, including the herd being antibiotic and hormone free. The farm breeds for spring calves, which are weaned in September according to the phases of the moon.

After weaning, calves are feed on the farm for 45 days with a 14-percent protein specialty feed from the Baxter Springs, Kan., Co-Op. The goal is to produce a uniform set of F1 calves, which mature at an appropriate size with a perfect ribeye and the best marbling in order to meet the high expectations of the buyer’s consumers.

Another requirement from the buyer is to have IMI electronic tags so each animal’s efficiency and health can be tracked back to Teddie’s farm and the calf’s sire.

For each calf crop, an auditor from IMI visits the farm to verify the calves. The process serves both Teddie and the buyer by ensuring that Teddie has followed all procedures and the buyer is certain the calves are what he wants. The buyer then sends a semi to pick up the calves, and they are fed to maturity with the buyer maintaining production data on each calf. The system produces a load of 85 to 95 calves headed for Texas, with the Andrews retaining enough calves for replacements and to feed family and friends for the coming year.

Wagyu calves are small, more or less German Shepherd sized, with only one calf having to be pulled in seven years.

An interesting characteristic is that calves take two or three days to figure out who their mother is, so they are kept in the Andrews’ “maternity ward” to eliminate disorientation and possible death.

The Andrews’ pastures are mostly fescue and native grasses. They are fertilized with chicken litter purchased locally with the timing dependent upon availability and regulations. Weeds are controlled by broadcast spraying in the spring and/or fall with thistles and a tall weed with stickers that Robert called “careless weeds” controlled with some spot spraying.

The farm produces its own hay, 500 large round bales in a typical year.

Robert passed at a critical time. The bulls were supposed to be put in with the herd on May 15 when everyone was at the hospital with him. Teddie looked at her gravely ill husband and could almost hear him saying, “You can’t help me so get the bulls in with those cows.”

He passed on May 16. The next day the children were standing around saying things like “Momma would want this or Momma would want that.” Teddie promptly stepped in and explained she was not a doddering old woman and could make her own decisions. The family prayed, separated the cows into four herds and turned the bulls in.

Robert and Teddie’s son Russell is now a full-time salaried employee, but Teddie is still very much hands-on.

At this time granddaughter Ramsey, Russell’s daughter, is considering showing two Wagyu heifers. Teddie hopes that within 10 years, Russell and Ramsey will be running the farm with the other grandkids always welcome to return to their roots. 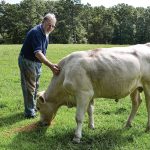 A Different Path for the Maanums 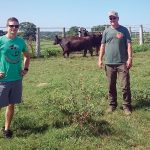 Making the Most of the Ozarks 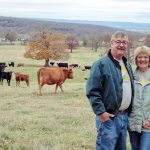