Justin Luther describes himself as a farm boy. He has diversified that passion into a variety of agricultural pursuits that keeps his family on their farm in Fulton County, outside of Viola, Ark.

Justin and his family are the fourth and fifth generations of Luthers to reside on the land bought by his grandparents, Lawrence and Virginia Luther, in 1949. In 2019, the Luthers were chosen as the Fulton County (Ark.) Farm Family of the year.

“I grew up on my parents’ dairy farm,” Justin said. “As a kid, I thought it was a great life, milking 80 to 100 cows twice a day. When I was 13, I bought my first cows, 10 momma cows, with a small loan that was co-signed by my parents. By the time I graduated high school, I had 65 head of beef cattle. I would go to three area sale barns and buy yearling cattle.”

Today, Justin raises 300 head of primarily crossbred cows, including Angus bulls on Charolais, Angus and Red Angus, and some Brangus cows on 4,000 acres, both his own and leased acreage.

His father has another 1,150 acres with another 100 head. Justin leases approximately 1,700 acres scattered across Fulton and Baxter counties in Arkansas and Howell and Ozark counties in Missouri.

The majority of his farm is used for grazing.

“I keep about 1,000 acres in rotational grazing, with most fields being 30 to 50 acres. I move the cows every three to seven days.”

“I turn in my bulls on April 4, which gives me a calving state of Jan. 15,” Justin said. “That makes it easier for me to get my cows bred before my fescue heads out. “I also have about 70 fall-calving cows.”

“I try to wean my calves between 7 and 9 months of age,” Justin explained. “I try to sell my yearlings at 850 pounds.”

Justin’s wife Rachel, who works for Central Arkansas Radiation Therapy, Inc., did not grow up on a farm, but rather in the small nearby town of Viola.

“My parents, Robert and Becky Lash, had friends and relatives who had cows so I had been around them before Justin and I started dating when we were both 16. Helping him out when we were still dating, I had a pretty good idea of what to expect,” she added.

She has helped pull more than one calf but probably didn’t expect to be doing so when she was 8 months pregnant.

“That probably was not too smart,” Justin added with a grin. “But you never know exactly what you are going to be doing any particular day on the farm.”

As a part of his agricultural career, Justin began buying up small farms, especially around areas where he had previously leased acreage. He is now helping the next generation in the Luther family, his daughter Addison, to do the same thing.

“She just bought a 40-acre plot,” Justin said. “She now has eight cows on it as well. Both of our kids help out on the farm, raising bottle calves, opening gates, helping to move cows from paddock to paddock with rotational grazing.

The lifelong cattleman said farmers today are facing many hurdles in today’s world.

“The biggest challenges we face regularly are the things you cannot control, like the weather and the three F’s – the price of fuel, feed and fertilizer,” he said. “In recent years, the price of equipment has also added to that problem. Cattle prices are not in line with the costs and haven’t been for some time. Until America understands how important agriculture is to our economy as well as to our dinner tables, those prices will not come back into some kind of proper line. In the meantime, all I can do is improve my work ethic and do my best, praying the good Lord will lead me in the direction I need to go. And I’m hoping my kids will be able to continue in our family’s chosen profession, because like me, they love it.” 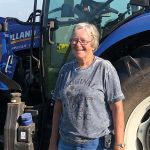 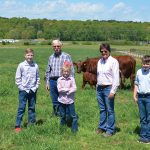 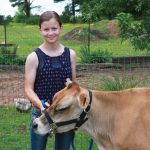 « In Love With Limousin
One Piece at a Time »