A nonprofit organization known as Historic Cane Hill is making a concerted effort to restore sites primarily in western Washington County as authentically as possible. The heart of their efforts is the Cane Hill community. A current project is the restoration of Cane Hill Presbyterian Church. The church’s history has been carefully pieced together by David B. Ellis in his 1992 book, The Presbyterians of Cane Hill, Arkansas.

“The process was rather like putting a thousand-piece jigsaw puzzle together when bogus pieces are mixed with genuine ones,” David said.

An unusual aspect of the Cane Hill history is that three different branches of the Presbyterian Church served the community for a considerable period of time. While James Buchanan may have held Sunday school as early as 1826 in his log cabin home, the Cane Hill congregation, with 38 charter members, was established in 1828 by Rev. William T. Larimore and Rev. Jesse M Blair. The congregation first met in a log facility at the site of the current Cane Hill Cemetery. Part of the early history includes Rev. Blair being killed during the Civil War and his mill burning.

In 1844, the congregation split over philosophical differences with the offshoot being called the Salem congregation, with Rev. Samuel Harris serving as its first minister. For many years the congregation met in Cane Hill College. In 1891 F.R. Earle received an annual salary of $63 for one Sunday per month and served as Cane Hill College president beginning in 1859 though the college was closed during the Civil War. In 1919, that congregation moved into the church that is nearing complete restoration.

The third Presbyterian congregation, known as the Mount Bethel Church, was established in 1889 and organized by Rev. T.B. Lunsford and Rev. S.W. Davie. In 1891, this congregation built what is now called Cane Hill Presbyterian Church after receiving a $300 loan from the regional Presbyterian organization.

Founding member Getty McClellan owned a stone quarry and donated half of the stone for building the church, with other church members hauling the stone by wagon to the construction site, land donated by Mr. and Mrs. J.C. Kirby.

The interesting part of the church’s history is the transfer of ownership in 1919. The Cane Hill School Board wanted full use of the college building, and the Salem congregation (now First Presbyterian after a name change) wanted a “real” church building. Further, the Mount Bethel Congregation was in dissolution. The result was that the School Board bought the college building, and in turn First used the funds to purchase the church building from Mount Bethel’s governing body. In 2017 building ownership was transferred to Historic Cane Hill, with a lifetime tenancy for the congregation.

Some families from the earliest church remain in the area.

Restoration of the Cane Hill Presbyterian Church is nearing completion. The architect in charge of the project is John Greer, historic preservation project director of WER Architects. John is additionally connected to the restoration because he is chairman of the nonprofit Historic Cane Hill.

One of the basic tools of the trade is using historic photos which drive much of the decision-making. An example is the church’s exterior. A vintage photograph showed the church having a different type of front door with a duplicate now serving as the church’s entrance. Pictures also showed a roof of cedar shake that now covers the church and is accented by copper gutters and flashing. A raised choir loft was dismantled so the church’s configuration is back to its original look with the shorter choir loft pews still to be placed properly.

Another aid in making decisions during historical restoration projects is on-site research. Part of the church had wallpaper, which was discovered to be three layers thick.

“Replicating that original wallpaper was cost prohibitive, but using that color is true to the original design choices,” John explained. “Nonetheless a small piece has been retained and is on display in the Cane Hill Museum so visitors can see exactly what that paper looked like.”

The church originally had clear glass windows but were replaced with stained-glass during the 1950s through donations from various congregation members. Each window contains a commemorative plaque with the name of the donating member. The same process was used in replacing the original pews which also have commemorative plaques.

“This has been a personally gratifying project,” John said. “The congregation is made up of wonderful people. The hope is that the beautifully and historically renovated church will bring new members and ensure continuation of church services within the building for many years to come.” 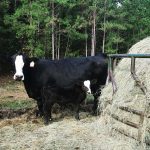 Rebuilding a Farm and a Herd

« Getting the Right Fencing
New challenges »