Growing Up With Dorpers

When Hayden McCormick couldn’t have a horse, she went with Dorper sheep

At 11 years old, Hayden McCormick is a young owner and breeder of Dorper sheep.

She started showing sheep when she was just 5 years old, after getting her first lamb, Marshmallow. That first sheep was a market lamb and taught her more about the realities of raising animals for meat than she first understood going into the project.

Although she learned one of the harsher realities of life on a farm at a young age, she was also determined to keep raising sheep. She now has five Dorper ewes registered with the American Dorper Sheep Breeders Society (ADSBS).

Her mom Melissa McCormick said when she and her husband Brandon asked Hayden what type of animal she would like to raise, she wanted a horse.

They were not prepared for such a large animal, so they suggested she choose something else, something smaller and easier for a young child to handle. She chose sheep.

After researching various sheep breeds, they settled on Dorpers because of their gentle disposition. The Dorper sheep are white with a black head, but there is another variety of Dorpers which are all white, and appropriately named the White Dorper. Hayden prefers the black and white because she thinks they are prettier. Although they have a gentle temperament, Dorpers can still be headstrong when they think they are going to get fed.

“I was trying to load Gerdie because we were going to take her to a kind of petting zoo at the day care, but she thought there was food and she took off running. I hung on to her lead, but fell and got pulled into the edge of the doorway. It was a real rodeo,” Hayden said.

According to the ADSBS, Dorper sheep were originally developed in 1946 in South Africa where they were searching for a quality meat sheep that would also do well in arid environments. The Dorper was developed by crossing the Dorset Horn with Blackhead Persian sheep. It is a hair sheep and sheds its winter coat each spring and is known for its ability to thrive on large varieties of forage. They are not picky eaters and excel at converting grass into quality meat. Another benefit is that they are naturally heat resistant and insect tolerant. Its popularity has spread to many countries and is one of the fastest growing breeds of sheep in the United States.

A mature ewe weighs between 180-210 pounds but can still be handled by a young child. Hayden is involved in showing her sheep at local county shows. She and her sheep have won numerous awards including a grand Champion ribbon at the Laclede County (Mo.) Fair. She has also shown her sheep at Wright County and at the Dallas County Fair.

“I love all my sheep; Gerdie, Rose, Ray, Riley and Lilly. Sometimes I take them all to the shows, sometimes just a few,” Hayden said.

She gives credit to her grandpa, Lionel Hawkins, for helping her to train the sheep for show. He gives her tips on showing, and often accompanies her on walks with her sheep on lead to train them for walking in the show ring. She also appreciates her grandma, Melody Hawkins, who fixes their lunches when they are at the shows.

Hayden bathes the sheep prior to clipping and her dad, Brandon, shaves them about a month before the shows. The sheep are judged primarily on their degree of muscling, degree of finish, balance and style, frame size, and soundness and structural correctness. The children are judged on their showmanship and how well they handle their animals in the ring. “I won the showmanship award once when showing a goat owned by someone else,” Hayden said.

The McCormicks follow a controlled feeding program for their sheep. The sheep get alfalfa hay and grain, which is formulated with minerals already mixed in, and limited grazing due to the risk of grass tetany, a metabolic disease involving magnesium deficiency which can lead to the death of the animal.

The sheep are vaccinated annually for blackleg, a highly fatal disease of both cattle and sheep, and are wormed on schedule each spring and then again, later in the summer. They also use antibiotics and Vitamin B if warranted.

A family friend also owns Dorpers, so when it’s time to breed them, Hayden’s ewes go to visit a ram at the friend’s farm.

Hayden loves showing her sheep and will continue to do so until she gets older.

“Someday I would like to breed and raise Dorpers to sell for breeding stock,” she said.

So far, Hayden has sold three ram lambs. Two have gone to flocks in Joplin and Illinois. She says she is also interested in learning to judge shows, so may pursue that through FFA when she reaches middle school. 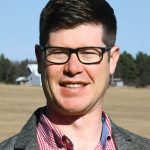