Producing in Harmony with Nature

“We raise a variety of livestock, but also believe it is important to provide a place for wildlife,” Debbie Taylor of Dover, Ark., said.

Bluff Top Farm has 220 acres with about 75 in pastures, while also managing 400 acres owned by extended family who live elsewhere. Debbie and her husband Randall raise commercial cattle, dairy goats, chickens for egg production and pigs for meat. In addition, the Taylor farm sells flowers, plants, herbs, native seeds and garden produce. Part of the 400 acres is used for timber production in plantation-style land, that is pasture transitioned into rows of planted pine trees for harvest. The most mountainous part of the acreage is left for wildlife.

Local predators include coyotes, mountain lions, bears and bobcats, as well as rat snakes that love chicken eggs. To handle the predator issue, the farm uses Great Pyrenees dogs and a guard donkey.

“We try to live in sync with nature rather than oppose it,” Debbie explained. “We don’t even kill the rat snakes but simply capture and relocate them to a remote part of the farm.”

One aspect of the multi-species operation is membership in an online farmers market called Russellville Community Market. Growers enter what they have to sell for the week while buyers purchase from Friday to Sunday. Then the buyers go to the Russellville train depot to pick up and pay for their purchases during a specific time frame on Tuesday. When customers arrive, growers will have already delivered their products which are then handed to buyers by a worker who also collects the purchase prices.

“One advantage of this system is that nothing goes to waste,” Debbie commented. “We bring only what people have purchased and also save valuable farming time by not having to stay at the site all day to sell what products we decide to bring. One drawback is not getting to interact with buyers.”

While many businesses are having a difficult time during the coronavirus pandemic, the Russellville Community Market growers have seen their business increased tremendously. Buyers appreciate not having to go to grocery stores where contagion control is less certain. Workers deliver goods to buyers and wear masks, while buyers never have to leave their cars.

The farm sells chicken eggs from miscellaneous breeds with the goal of selling fun, multicolored eggs. The project got started when Debbie and Randall’s now adult children were in 4-H. Some experimental cross breeding has resulted in unusually colored eggs. On the other hand, some of the chickens are just for fun, such as the Polish, which have big pom-poms on their heads.

Debbie and Randall met at Debbie’s boyfriend’s house but didn’t start dating until a year later. When they married, they came to Arkansas to live on land Randall’s father Elmer planned to use for retirement, but never did. The couple moved into the farmhouse and began their adventure with dairy goats in 1974.

The herd currently has 37 purebred, registered Alpine, Nubian and Toggenburg females that not only produce milk for sale, but also provide breeding stock, which means the breeding bucks must be kept separate.

For 25 years, Bluff Top Farm sold goat milk to Ozark Milk Products, where it was turned into canned evaporated milk. Now, however, the Taylors list milk on the online site, but, in accordance with Arkansas law, the buyers have to pick up the milk at the farm. Milk is sold mostly by word-of-mouth and to repeat customers, with a few goats produced for meat through a custom order process. Some goats and kids are also sold to 4-H and FFA members, mostly for showing. Debbie enjoys seeing pictures of the farm’s animals and their young owners.

“When you raise goats, you quickly discover how prolific they are and you have a choice,” Debbie said. “You either limit the quantity of animals or go commercial, and we decided to go commercial producing both milk and breeding stock.”

In addition to health protocols, the goats are tracked in the Dairy Herd Improvement Registry (DHIR) and have been for 40 years. DHIR tracks milk production quantity as well as quality including protein and butterfat percentage. The herd also participates in Linear Appraisal where a trained appraiser comes to the farm to score each animal. The scoring consists of a whole animal conformation score, plus scores for the individual parts of each animal. Data is sent to the USDA and is available for individuals to research.

“These records not only help me keep track of my own herd, but assist in finding a buck that meets whatever traits I especially need at that time,” Debbie explained.

In 1996, Debbie and Randall developed a commercial cattle herd, which now consists of 15 crossbred females. Calves are typically born in March and are mostly sold at weaning in a sale barn, though some are sold to friends or processed for meat at a USDA facility.

“There is a real need for more USDA processors in our area,” Debbie said. “You have to make reservations many months in advance.”

Just to keep things interesting and make sure they have enough to do, Randall, a mostly-retired logging contractor, harvests trees. At one time, they were using a half Clydesdale horse named Jeff to skid logs. One night they went to get pizza, throwing the leftovers in the back of the truck as a treat for the dogs. They came home and forgot about the pizza only to discover that Jeff had found it and ate it.

“You’ve never seen a horse with such a surprised and half-disgusted looking expression,” Debbie laughed. “He was a real trooper, however, and finished what he started.”

Sharing the farm with others 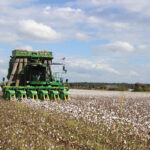