Scottie and Kristi Smith grew up in agricultural families.

Kristi was raised on her family farm where they produced chicken, beef, soybeans, strawberries, squash and wheat. A distinguishing feature of that farm was having broiler, breeding, and laying hen houses at the same time.

Scottie grew up on a cattle ranch and remembers going to sale barns with his dad Danny and credits his dad for teaching him everything he knows about cattle. Young Scottie believed he should go with his dad every single time and wasn’t very happy if his dad went without him.

Scottie and Kristi attended the same high school and recenlty celebrated their 30th wedding anniversary. The couple have a daughter Breanna, a son Chandler, and grandchildren Rosslyn and Jimmy.

In addition, the Fort Smith Stockyards is part of a three-way family partnership. Business has grown under the new ownership, which Scottie feels is due to new blood and ideas energized by the purchase.

About a year ago, Scottie and Kristi sold their farm in Yellville, Ark., and moved to Westville, Okla., to be closer to the sale barn business. They settled on Kristi’s inheritance share of the 340 acres her dad and mom, Arlene and Danny Chandler, purchased during the mid-1970s. Though Danny Chandler retains ownership of part of the land, Scottie and Kristi use all of it for their commercial cattle herd.

They have 110 mostly Angus-cross cows, which are bred by one registered Angus bull and two registered Hereford bulls. Females are culled when they don’t raise a good calf, get too much age or skip a cycle.

The couple want to have a cross on the Angus cows and use the Hereford bulls to raise black baldies as a way of taking advantage of Hereford’s larger and more muscular frame. They change bulls every two to three years. When purchasing new bulls, the most important criteria are good milk numbers, strong weaning and yearling weights and good conformation.

The Smiths use both fall and spring calving, with three quarters of the calves being fall calves. “There’s no real reason for more fall calves. It just happened that way,” Scottie said.

Calves are worked once or twice before weaning, which occurs at 6 or 7 months of age. They receive 4 to 5 pounds of a 13-percent protein grain ration before being sold 60 to 90 days after weaning. Cows and bulls receive grain in the winter.

The Smiths follow a strong health protocol. They frequently double worm cattle and rotate the method and the product to ensure efficacy. One practice that contributes to herd health is bringing in very few outside cattle. Another is using Purina 12-12 free-choice loose mineral and making sure to have a high-magnesium mixture in the spring.

The land is fertilized with a commercial fertilizer and treated for weeds at the same time with spot spraying for thistles an ongoing process.

“Scottie loves to fertilize because he knows doing so provides the good grass cattle need,” Kristi explained. “He would love to run a set of yearlings. but we are too busy now to do that. Between the cattle and the sale barn, time is our biggest challenge.”

Granddaughter Rosslyn lived with Scottie and Kristi for two years. Rosslyn knows every cow by sight and names them all. Rosslyn’s cow Mitten recenty had a calf. Rosslyn is so involved with the herd, Scottie and Kristi called her at school to let her know the calf had been born.

“None of this would work without Kristi,” Scott said. “She keeps me in line and knows how to do it.” 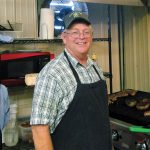