When considering a Farm Family of the Year, mental images of cattle, chickens and pigs or row crops quickly come to mind.

Last year’s Lonoke County Farm Family of the year shatters that stereotype and is the largest fish bait farm in the country. The Andersons went on to win 2019’s Eastern Central District Farm Family of the Year, thus representing Arkansas in the 2020 Southeastern Farmer of the Year competition.

Andy (I.F.) Anderson ran a bait route with wild-caught baitfish. He discovered baitfish in the Lonoke area were especially hardy. Then, in 1949, he and his father W.L. decided to buy 800 acres across the road. The mostly wooded land contained a rice field with levees that made transitioning to a fish pond practical. I.F. Anderson Farms now has 3,300 pond acres in which they raise several types of baitfish, including the popular Golden Shiner, black and pink flathead minnows, goldfish and the popular black salty. The black salty goes through a development process that makes it salt-water resistant and therefore perfect for both fresh and saltwater fishing.

The fishing industry boomed after World War II when the Army Corps of Engineers helped the U.S. economy adjust to the influx of returning soldiers by building dams and levees. At one time, therefore, the farm had 7,500 pond acres, but has since become more modernized and efficient. The workforce ranges from 25 to 48 employees according to seasonal needs.

Family farm heritage is taken seriously, with Jamie hoping his sons will choose to become part of the business as well. Family youngsters traditionally have begun on the farm when they reach age 12 and Jamie’s boys are rapidly approaching the magic number.

The key to the baitfish industry is having product available year-round and being able to reasonably predict how many baitfish to have at optimum size throughout the year. Since spawning season is up to six weeks in the spring when temperatures range from 68 to 85 degrees, maturation has to be managed. Just to make things interesting, the prime fishing season and therefore their main selling season is in the spring when the next year’s crop is in the process of being born.

The process begins with brood stock, which are in special facilities with mats for laying eggs. Those mats are removed at least once a day when the eggs are collected and put in a hatchery tank for three days before being moved to the nursery ponds. The nursery ponds are densely populated which deters growth until the fry (newly-hatched fish) are transferred to the growth ponds in planned amounts for sale.

“I graduated from college in 1990 and returned to work at the farm and helped refine our processes,” Jamie said.

The first change was to build the first mass-produced Golden Shiner hatchery. As competition for the retail market became crowded with profit margins lowering, Jamie perfected a baitfish air delivery system for the retail market, but increasingly more importantly, the direct-to-consumer market. The idea of the consumer buying large amounts of baitfish may seem strange, but many avid fishermen buy baitfish once a year and place them in tanks for storage as they use them throughout the year. Some farmers purchase large quantities they then place in ponds as food for bass and other fish they have stocked for their own recreational fishing.

I. F. Anderson Farms helped develop the industry’s best management practices. Much like the chicken industry, the baitfish industry requires high-level biosecurity. One practice, which also conserves groundwater, is reusing farm water by putting it through a filtration system over and over again. An important advantage is that the closed water system prevents waterborne diseases from entering, therefore protects the fry. Another best practice is sterilizing nets, seines and tanks in addition to also rotationally sterilizing ponds. The ponds are drained as much as possible and then sterilized using safe and legal chemicals which dilute and dissipate as the ponds are refilled.

Jamie sees the customer-direct market becoming an increasingly important part of their market profile. Competition in the retail industry is highly competitive with a very low margin. Providing individuals with far more reasonably priced baitfish with a process that avoids the middlemen creates an advantage both for the producer and the consumer.

“The industry has changed much since my great-grandfather and grandfather began this farm. Seeing what the next 71 years brings will be interesting, to say the least,” Jamie said. 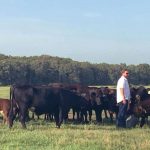 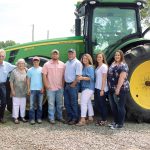