Not all technological advances come from highly trained engineers. Sometimes the ideas come from the boots on the ground.

Francis Ehemann, a lifelong farmer, had a problem. He and his two brothers, Joe and William, were all in their 70s and had to work together in order to install net wrap into a Deere 467 round baler. The baler produced 4-by-6 bales that are 60- to 62-inches in diameter when wrapped. With little room to spare in the storage compartment, the difficult process required the three brothers to lift 90-pound net wrap rolls 5 feet off the ground. Francis was frustrated and wanted a solution.

In August 2018, Francis attended the annual Arkansas Cattlemen’s Association Convention and asked a John Deere dealer if there was some kind of a lift that would allow him to load it by himself. When the dealer didn’t have an answer, Francis started thinking about a solution using a boat winch. The following February two bolts on the right side of the baler frame caught his attention. He realized they could support the winch.

That insight put him on a path of constructing something that would work. The end product weighed about 40 pounds with the lift supported by an angle iron bracket attached to the bolts on the side of the baler. Using a pulley system welded to a pivoting bracket allows the lift to swing sideways out of the way of the net wrap cover.

Francis built the prototype, learning it needed extra reinforcement to handle the workload. Next, he contacted a local welding company to fabricate one in order to determine how much the device would cost. Then, with a patent pending, he ordered more kits to sell. He has sold the kits in Kansas, Nebraska, Oklahoma and, of course, Arkansas. The device will work on any Deere round baler made after 2003. However, one buyer adapted the lift kit for a Vermeer baler.

“I have 40 acres set aside for haying, and this lift has made the process enjoyable again,” Francis said.

Francis and his wife Anita live on land from her family.

After working a the pickle factory for 30 years, Francis worked for another 12 1/2 years at a John Deere dealership. Nonetheless, he always had cattle. Francis was raised on a dairy farm which his father Henry sold in 1969. Eventually the three brothers inherited the farm with each receiving 80 acres.

The bull remains with the herd year-round, with weaning taking place between 6 to 9 months. When sold, the calves are almost always preconditioned and taken to 101 Livestock in Atkins.

Part of caring for the Ehemann cattle includes contacting the Extension office twice a year and setting up a time for a technician to vaccinate heifers in preparation for breeding. Free choice mineral is always available. When Francis discovered his cattle were consuming twice as much as they needed, he added salt to the mineral so they would consume less.

Caring for the land is part of caring for the cattle. Francis’ 40-acre hayfield in Atkins is comprised of native grasses with some Bermuda and a little clover. After the 2012 drought, he over seeded with wheat and rye. Then in the fall of 2018, he bought ryegrass and clover for his pastures. He prefers fertilizing his hayfield annually with litter and his pastures as needed. Francis also sprays for weeds with Johnsongrass being a particular issue.

“Crabgrass is good hay and at times the cattle like it better than Bermuda,” Francis said.

http://www.ozarksfn.com/2021/01/11/making-haying-a-little-easier/http://www.ozarksfn.com/wp-content/uploads/2021/01/EhermannEquip-1024x798.jpghttp://www.ozarksfn.com/wp-content/uploads/2021/01/EhermannEquip-150x150.jpg2021-01-05T15:09:45-06:00Terry RoppArkansas NeighborsNeighborsArkansas,farmer,Francis Ehemann,Hattieville,manufacture,net wrapLifelong farmer manufactures an easier way to load net wrapNot all technological advances come from highly trained engineers. Sometimes the ideas come from the boots on the ground. Francis Ehemann, a lifelong farmer, had a problem. He and his two brothers, Joe and William, were all in their 70s and had...Terry RoppTerry Roppterrymerrill@hotmail.comAuthorOzarks Farm & Neighbor Newspaper
Arkansas, farmer, Francis Ehemann, Hattieville, manufacture, net wrap 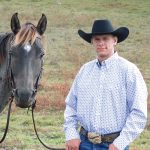 A Cattleman, Farmer and Cowboy