Church celebrates the holidays in a bright, speculator way

Since 1984, the Mother of Our Redeemer Vietnamese congregation has created a glowing light display of Christmas lights in Carthage, Mo.

The congregation was officially established on Feb. 2, 1953.

In August 1954, during the Partition of Vietnam, the congregation moved to various locations in South Vietnam, driven from their homes and churches.

On April 30, 1975, 185 clergy – about half of the congregation – left Vietnam as boat people just before the fall of Saigon. They arrived in the United States at Fort Chaffee in Arkansas and other Operation New Arrivals refugee camps.

After the fall of Saigon, some of the other leaders were imprisoned by the Communist authorities on accusations of spying for the CIA. The congregation’s assets were seized, except for a small dormitory for seminarians.

Plans were made for the refugees at Fort Chaffee to rent a vacant building in Carthage that had originally belonged to the Order of Mary Immaculate. The building was rented to The Mother of Our Redeemer for $1 to use as their monastery and place of refuge until they were able to purchase it.

The congregation developed and opened the Way of Salvation Christmas display of Biblical scenes and electro art sculptures as an attempt to help people recall and meditate on the profound meaning of Christmas and salvation.

Work begins on the light display right after their Marion Day Celebration in August. However, it takes a team of five to seven members of the congregation working for more than a month to check and set up forms, repair lights and make electrical connections for the one million lights, all in hope the community will take the time to visit. This is their mission and is for the American people. Come they do as they welcome about 10,000 visitors each winter.

Last year (2020) was the 36th year of the light display. As you arrive to the entrance to the Congregation of the Mother of the Redeemer, just east of Grand and Fairview in Carthage, you dim your headlights, and tune your radio to 88.1 FM for the self-guided tour. The hours are 6 to 10 p.m. nightly from Thanksgiving to the New Year – weather permitting. Admission is free, but a donation is appreciated to offset expenses.

Winding along the mile of dazzling lights, the Bible is brought to life beginning with the gate covered with lights and depicting John 3:16. Adam and Eve and the serpent flash from one side and angels on the other. As you continue, David saves God’s people by downing the giant, Goliath. When David twirls his sling shot and hurls the rock, the light arcs and Goliath goes down. Jonah is tossed from the boat and shown in the whale’s belly. Moses in the bulrushes is rescued by the Princes, later meets up with the burning bush and God talking to him through it. He leads the people to the Red Sea where they cross on dry land with walls of water on each side. The Red Sea is stunning as lights are on both sides and overhead as you drive your car through, reminding of the courage and faith required by Moses and the Israelite people as they stepped between those walls of water.

Mary and Joseph and the donkey with Mary on it were outlined in lights as they plodded to Bethlehem. Next, they were in the stable with baby Jesus, the star above and shepherds kneeling at the manger. Several wise men on camels followed the star to Bethlehem.

A bittersweet moment came with the next sculpture as it was the cross reminding Christians that because of his great love for mankind, Jesus came to give his life for our salvation.

Father Timothy of the Congregation of The Mother of our Redeemer at Carthage said, “What better way to have lights represent Christ, the true Light of Christmas. We have the providence of God every day. We are blessed and this is a way to give back.” 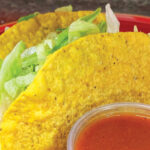 Famous for More Than Tacos 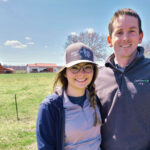 Growing Up in Agriculture