Getting Ready to Grow

As spring approaches, management of forages and crops is important for success

Forages haven’t awaken from their winter slumber, but now is the time to develop a plan for forages and crops.

Now is an excellent time to overseed pastures and fields. Halleran prefers a mixture of red cover, lespedeza and alsike.

“Alsike is the same as red cover, but red clover likes the dryer conditions and better pH, where the alsike will take the weather conditions,” Halleran said. “My farm has some heavy wet-weather springs, so I’m going to blend that together and throw in some summer lespedeza for the expansion of summer pasture. I already have some white clover to dilute the hot fescue.”

Halleran said legumes could be broadcasted, but the seed must have contact with the soil.

“The trick is that you have to have that pasture eaten down pretty tight so the seed will work its way to the dirt,” he said. “If you can, put cows back on a field and let the cows hoof it in. You can no-till it later on in the year, but as muddy as it gets, I like to broadcast because it’s fast.”

The freezing and thawing of the soil helps draw seeds into the ground. Producers should consider drilling seed after the last frost date.

“The whole key is to get that seed/soil contact,” Halleran said. “The biggest mistake people make is thinking they can go out and throw seed over the top of pasture that hasn’t been taken down or that has a lot of thatch on it. I overate my pastures a little this fall and got the thatch off of there because I knew I was going to sew red clover.”

Management of forages is a part of being a livestock producer, a part some producers forget.

“You can wonder if you need a better bull, if you had younger cows, used AI, changed your feed ration, but no one stops to think about the most expensive thing on your farm, and that’s the land. Grass is the cheapest food source you can have, and if you’re abusing that through weed contamination, a lack of fertilizer and overgrazing, it’s making your operation cost more because there is nothing there to eat, and you’re going to have to buy it, or you can sell your cows.”

“Things will start popping in March and April, and we will see if people can get their corn in the ground in time this year,” Halleran speculated. “There shouldn’t be any problem with moisture; we should have plenty. The snow we got might even add a little nitrogen to the ground.”

Halleran said any nitrogen added by snow is not typically a “major amount.”

It’s too early to begin working ground for some crops, but there are ways to fill any idle time.

“Now is the time to put your equipment in the barn and go through it. Check your bearings and make sure everything is in working order. Put that time to use inside and getting ready to go out in the field as soon as you can.”

He also recommended that producers know what crop they want to plant and what variety.

“Also, talk to the fertilizer dealer about getting access to fertilizers,” Halleran advised. “One big question is the availability of ammonium nitrate; it’s getting harder and harder because of the rules and regulations on that. Also, they need to make sure they have ordered their seed because there have been times when we have seen seed shortages. If they are considering doing a particular crop, they need to think about that, and if we have those strange weather events like we have had, you will sit there with corn seed in the shop, and it just keeps raining. Then you will get to the point of ‘how long can I wait?’ Farmers may want to see if they can return seed if it exceeds the planting date and trade it for something else.”

Most producers try to have their corn in the ground by April 15.

“Some people gamble and get it in earlier; sometimes it works, sometimes it doesn’t,” Halleran added. “There are people who can’t get it in and will have to wait until May. Corn can go into the ground pretty early, as early as the first week of April, but if it’s wet and cool for a prolonged period, your seed will rot in the ground. If it does sprout, you’ll only get half of it, and you’ll have to go out and work it into the ground and replant. I know some guys want to get it out early, but there is a reason we have a target date.”

There are also early or shorter-season varieties that producers can choose.

“Figure out what your harvest date is, back that date up and pick a corn,” Halleran said.

Soybeans are a summer annual, so planting is later in the year.

“It’s June for early beans,” Halleran explained. “You want your soil temperature to be 60 degrees before you put in beans so they will germinate. That varies by the kind of spring we have. Check your local weather stations to see what your temperatures are. You can also do a half-season bean and a full-season bean.”

Winter wheat was planted late last year, so Halleran is unsure how that crop will fare.

“I don’t know if we will see a lot of growth,” he said. “You could turn some calves out on it. In the fields I have seen, there wasn’t much initial growth to put cows on it. Producers may look at harvesting that wheat… The nice thing about snow, especially with the weather we just came out of, it blankets the wheat. That snow may have protected it from freezing. With the price of wheat, it might be worth taking the seed, then baling the straw. You have guys buying big round bales of corn stocks for bedding, so big round bales of straw might be something that is competitively priced with corn stocks. It will be a little different ballgame this spring, based on the cold in February.”

Also, do not apply fertilizer if the forecast is for a hard freeze within a week of application.

“On frozen ground, water will run off, and if the ground is frozen, so will your fertilizer,” Halleran said.

This is the time of year many fescue seed producers will also be applying nitrogen to fields.

Early April is an excellent time to start working on weed control.

“There will be a lot of people looking to spray their pastures for weeds, and those guys who do fescue seed will be spraying as well so they can have the water and fertilizer working on the fescue, not the weeds.”

Lower-quality hay fed in the winter months may contribute to the weed population.

“The cows will stomp that seed down into the ground, just like they will the clover seed,” Halleran said. “When you get the kind of snow we got, producers have to have somewhere for those calves to lay down, and they aren’t going to put the high-quality hay out there; they are going to put that into the ring feeders. I’m curious to see how our pastures do and what repercussions we will see with that next year with the weed competition. Whenever you have a disaster, there is always that lingering effect.”

Halleran added that unwanted plants must reach about 2 to 4 inches in height before chemical eradiation can be done effectively.

“There’s not enough plant there to absorb the chemical and kill it before that,” he said. “We will have to see if the weeds are present and see at what level they are present. Some weeds, the cows will eat and take care of it for you, like chicory in the young stage, but if those bales had Johnsongrass, it will be everywhere. Things like curly dock and perilla mint will present, and what I call the plague of Southwest Missouri, bullnettle. Your second cutting hay can be full of weeds.”

For more information about forages and crops, contact your local Extension center.

Taking it too far 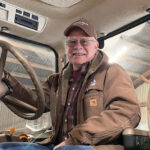