Texans Find a New Home in the Ozarks

Carl Cluck had a decision to make, one that the Texas native never thought he would have to make, but with a four-year drought eliminating almost all usable land on his cattle ranch, he knew he would have to make a big change and that change would have to come sooner rather than later.
Carl is a third generation cattle rancher who lived in the Texas Panhandle specializing in Red Angus. The normally thriving pastureland went year after year without rainfall, which made Carl move the majority of his herd to area farms since he was only able to irrigate 367 acres of his sprawling 9,400 acre ranch. The land of his grandfather’s was deteriorating and he realized the future of the family business was as uncertain as the rain.
“I knew if I hung onto this place my kids wouldn’t have a future here.”
Carl had more than just himself and wife Christine to consider. His daughter, Carissa and her husband, R.H., who have two small children and his son, Coldar, a recent college grad, all wanted a future in the agriculture industry. Carl knew he had to find some way to save the family business, so it would provide for not just him, but for two more families as well.
He started looking for an area that had at least 40 to 50 inches of rainfall per year that could easily sustain his 400-plus head of cattle. Carl began his search in east Texas and when that didn’t pan out, expanded his reach into eastern Oklahoma. He still had no luck finding an area with the precipitation requirements and his needs for cattle facilities and acreage, not to mention also fit his budget. A friend who was in the banking industry suggested he look in Missouri. Initially, Carl thought it was too far away, but with time ticking away, he began to research potential areas.
“I was seeking God with all my heart. I was considering moving my family 600 miles away,” he said.
His search led him to a 3,400 acre property located in the Ozark Mountains nestled in Mountain View, Mo.
The property had originally been owned by the Doanes family in the 1920s, and in recent years had been operating as a cattle operation. Despite recent years of neglect, it did have some improvements, including wells, underground water lines and fencing, which were exactly what Carl needed.
After a somewhat rocky beginning, including his wife being diagnosed with cancer and his father, R.J. Cluck, developing serious health issues, Carl moved his operation to the greener pastures of Missouri.
With the help of his son-in-law, R.H. and a former employee of the property’s predecessor, Floyd Conway, the Cluck Ranch began its new start in the Ozarks in 2014.
It took 13 semi loads to transport his 400 head of livestock and that wasn’t the only obstacle. The Missouri property was ready for cattle, but not people, with several homes that were dilapidated and unlivable, Carl also had to also find housing for his family.
The original owners built several stone structures, including a large manor house which the Clucks preserved, remodeling it to resemble the original home as much as possible.
“It was awesome how it all came together,” Carl said with a grin.
Thanks to the ample Missouri rainfall, Carl is now able to practice strip grazing and hopes to get his stock rate up to as little as 3 acres or less compared to the typical 6 to 7 acres usually required per cow/calf pair. He has also been pleased that in the three years he has lived in Missouri, he has not had to feed much during the colder months. Despite the increase in grass and rain Carl knows that in order to best utilize his land and reach its full potential they will have to “help the land” by ridding it of the invasive plants that have taken root during the absence of diligent owners.
His future goals for his Red Angus herd include doubling his current commercial herd of approximately 400 mature cows, while implementing more embryo transplants to produce more seed stock heifers. He hopes to continue to raise a “better cow.”
With his wife now in remission, his father healthy and just a stone’s throw away in his own cottage, and his children raising their own families on the ranch, Clark looks towards the future with a lighter heart.
“Now every day is a good day when before every day was a bad day,” he said. 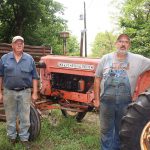 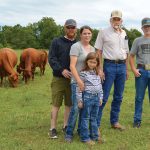 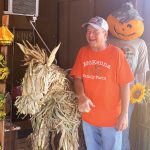 Farming for a Community