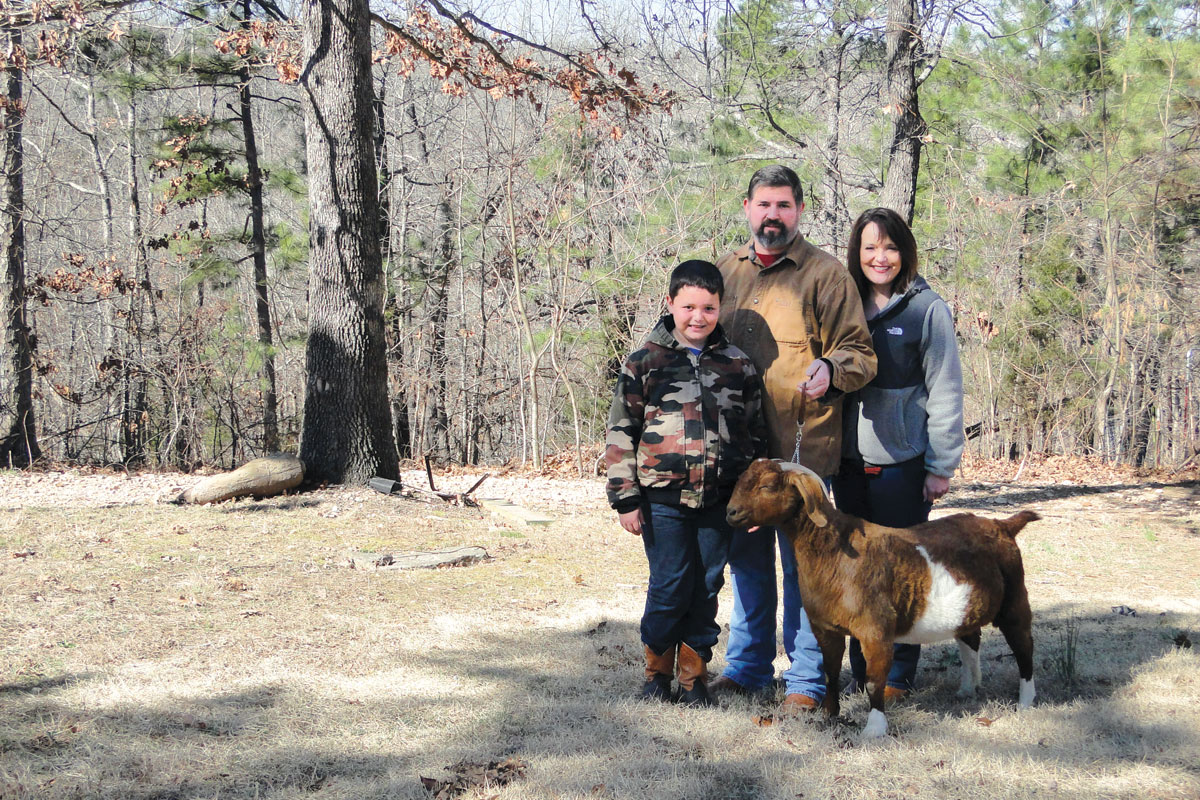 How does a Dallas, Texas city boy end up raising Boer goats outside of Bergman, Ark.? He meets a gal at the University of Arkansas, takes her to dinner, marries her and buys 7 acres near her stomping grounds.
A big problem facing the city boy was a valley full of 3-foot tall poison ivy plants. The solution: goats.
Gene Jones, who attended Ozark Baptist Church with Robert McMahen and his wife Jennifer, introduced Robert to Boer goats and he was instantly charmed by their appearance and muscle.
“I had no idea how horrible city life was or how fun country life could be until those goats became part of my life,” Robert said.
Robert and Jennifer both work for FedEx in Harrison, Ark., just down the hall from each other, where Robert is a pricing analyst and Jennifer is a pricing manager.
Their daughter Shelby, now married, came along and brush goats became breeding goats for Shelby to show.
Robert’s steep learning curve included purchasing a buck named Cattilac in 2007. Robert first saw the registered goat at a show in March 2007. He purchased the buck and picked him up in May in Little Rock, Arks., where Cattilac immediately won that state spring show followed by the Junior American Boer Goat Association Senior Champion title in 2010.
Robert took a class in AI that same year so he could import other superior bloodlines without the steep price of owning more championship level bucks.
“My goal is and always has been to raise and show our own champions while tinkering with genetics to get the best possible animal and making some of them available for others,” he said.
Robert later added ET, using eggs flushed from his best doe, to his breeding program. The combination of AI, ET and natural breeding allowed Robert to develop a diversified bloodline that he carefully culls. His criteria for culling include parasite susceptibility and non-show quality appearance, as well as temperament or breeding issues.
He has a specific protocol for parasites, using a frontline wormer on all his kids and on adults as needed. If a more persistent parasite problem occurs, he has a stronger product where dosage is calculated by weight. He learned this particular combination from competitors at shows and appreciates the friendly sharing of information and tips that typifies the camaraderie among showmen.
When their son Tyler, now in third grade, started showing, the business goal of Tri Mac Boer Goats shifted emphasis from breeding stock to market goats.
Breeding shows last all day, with several events hours apart, whereas market shows are usually one-shot and out.
“I really like showing my goats but then I want to leave because my feet get tired,” young Tyler said.
According to Robert, heavily-muscled market goats are even more expensive in terms of breeding than breeding stock, partially because a champion wether is a terminal animal that still requires expensive genetics.
Other differences between breeding and market goats are that breeding goats bodies are deeper with more volume to handle the multiple kids. Robert tries to minimize the chances of three or four kids per doe among his market goats by not flushing the does with feed before breeding. He said the extra kids bloom later, which does not help in the show ring. Another part of Robert’s health protocol is administering a two-shot vaccine program to each kid.
Robert keeps a herd of 20 does while keeping his bucks separated from the does in order to selectively breed to his chosen bucks.
“In my book, that’s one generous lady,” Jennifer said.
Robert may not have put in his first fence post until he was 20 years old, but he has more than made up for it including by being active in the agricultural community. 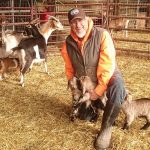 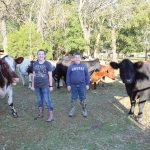