A Century of Fellowship 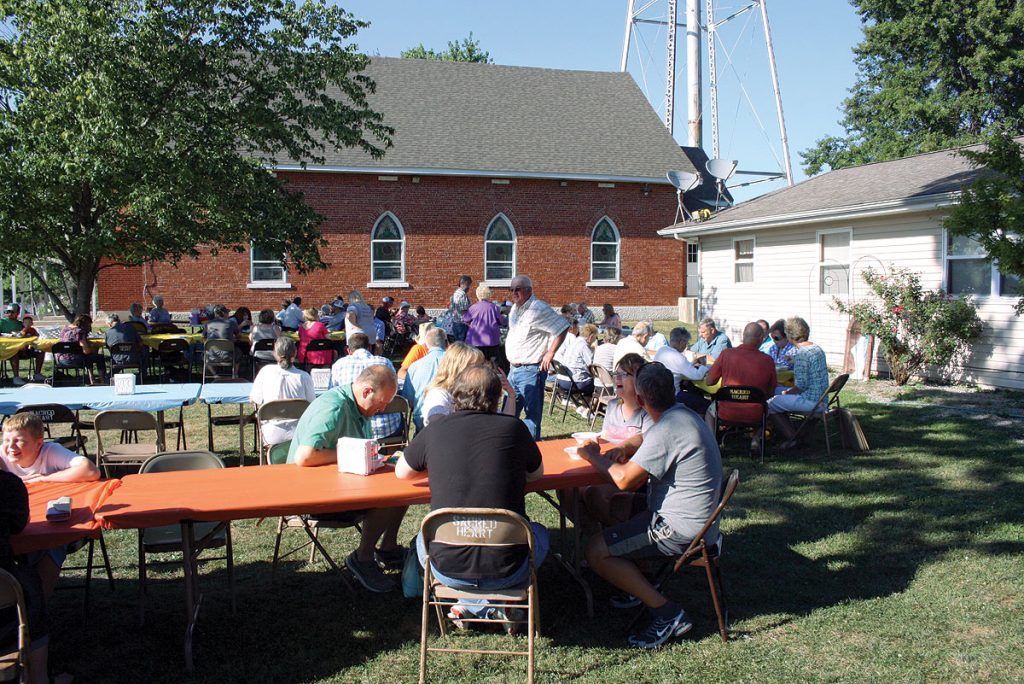 Nothing is better on a hot July day than a heaping bowl of homemade ice cream with friends and family, and for the last 100 years, parishioners of the Sacred Heart Catholic Church in Conway, Mo., have been churning out gallon after gallon to share with the community during its annual ice cream social.

Held on the Saturday closest to July 15 each year, the event has evolved over the last century from a parish member gathering into an event that draws people from around the Ozarks.

Ann Cunningham, a long-time member of the parish, said members join together to not only make gallons of ice cream, but cakes, pies, burgers, hotdogs and other treats for the event, which helps raise funds for the church. There is no set price for the food served to those who attend, but the social is typically the biggest fundraiser of the year for the parish.

Ann said there are some historical accounts of the ice cream social starting in 1916, but since the cornerstone of the church is dated 1917, they opted to honor the 2017 event as the centennial year.

“It was really an event then,” she said. “There’s a picture from the past where they had their finest linens on the table and there was silverware on the table; it was really kind of a fancy event. We don’t even cover the tables now. I think the picture is from about 1920, 1922 or so. We used to do it all in the front yard of the church under the trees, but tornadoes have taken a toll on them, so we moved it all to the backyard, then last year (in 2016), we moved it all back to the front. There is just ambiance up there. I don’t ever remember a time when we didn’t go to the ice cream supper. I will be 72 this year, so it’s been a long time.”

“There’s always something,” she said.

In addition to food, there are games for the whole family, from a ring toss for the kids to Bingo for all ages.

“There are people who will sit down for the first game of Bingo and never get up. My problem is, I never get to play,” Ann said with a laugh. “I’ve been in this parish for more than 50 years and never played because I’m always working.”

Quilts and other items are also donated for silent auctions and raffles.

On the morning of the event, parish members come together to set up tables and chairs, and the ladies begin getting food together.

“Some of the men and the kids are busy cranking,” Ann said of the ice cream making. “It’s made freezer by freezer, then put in these 15-gallon packers, then it’s packed up for the evening. We churn right up until about noon and then everyone disbands, then you go home and bake your cakes for the cake walk and service that night until you come back that night.”

She added that no electrical or automatic ice cream makers are used for the social, and finding hand-cranked machines became a challenge.

“We have worked and worked with freezers,” she said. “This one’s innards won’t work with that one, this one won’t freeze right.”

Luckily, the parish was able to find new ice cream freezers and those new hand-crank freezers were put to work for the 2017 event. Ann said several parishioners purchased the freezers in memory of loved ones.

While the social is a time to raise money for the church, it’s also a time for people to reconnect with others.

“There are members who left the parish years ago and they plan their vacation around so that they can come to the ice cream supper. There’s lots of hugs and kisses, you see the new babies and the older folks who might not be there the next year,” Ann said. “We compete with things like fairs and weddings, and births.”
Ann shared when she had to gather her family at the supper and head off to Columbia, Mo., for the birth of a grandson.

“He kind of comes out on the short end,” she said, admitting that he will always have plenty of cake and ice cream around his birthday. “Who could ask for a bigger party than one with hundreds of people? And if you don’t like angel food cake, you can have chocolate cake; if you don’t like chocolate cake, you can have a cupcake… Really, this is a generation after generation event. I have a picture of my husband and all four of our sons cranking ice cream; it’s just a lot of fun.”

Sacred Heart welcomes all to the annual event.

“It’s not just people from the church who come,” Ann said. “There’s one little boy who lives down the street who has been coming for years. He’s in college now and still comes, and he’s not even of our faith. He’s friends with some of the other kids in the church who bring more kids.”

Ann said there have been times when the parish has considered dropping the social, but there’s no stopping the church and the rural community from rolling up their sleeves and churning ice cream.

“I think when we hit 100, a lot of people thought we should call it quits,” Ann, whose grandparents and great-grandparents, were among the early parishioners, said with a smile. “Well, we can’t call it quits now because we have several hundred dollars worth of ice makers. I hope the day never comes that it stops. It’s a hard day and at my age, I don’t have a lot left, but I have grandchildren and I hope they carry it on. It’s just serving God, serving your fellow man. It’s an opportunity to receive and give, it really is.”