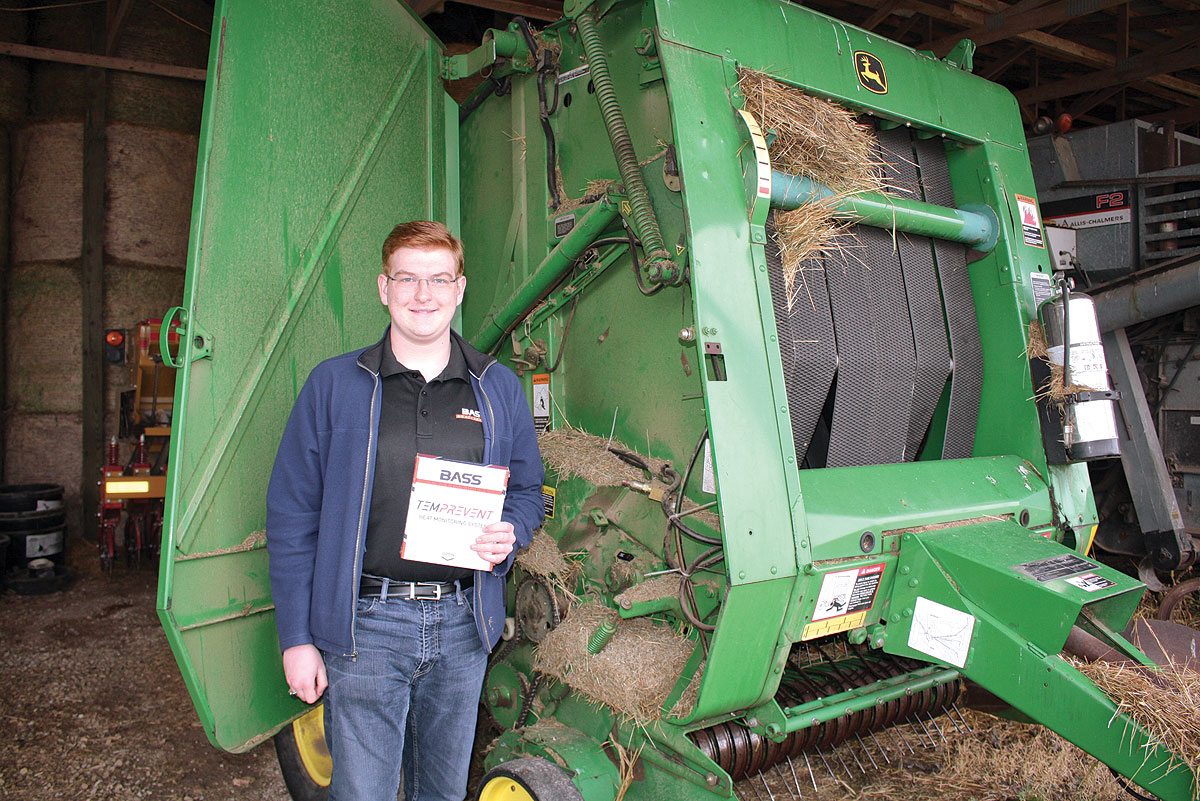 A warm summer day got a little hotter near Rogersville, Mo., a couple of years ago when a baler caught fire at the Bass family’s farm.

Luckily, the young man operating the baler managed to disconnect his tractor and move it away from the flaming implement, but the baler was a total loss.

The incident, which was caused when a bearing overheated, gave then-high school senior Parker Bass an idea, an idea he believes will save farmers thousands in equipment damage or loss.

“I thought there had to be a better way to monitor temperatures in all kinds of situations and take care of problems before there are bigger problem,” Parker said. “That might be the only time a baler fire was a good thing.”

Parker has developed a temperature sensor called Temprevent, which can detect an overheating bearing or component, sending an alert to a smartphone or other device when the temperature reaches 167 degrees. Parker and his father Scott Bass have now launched Bass Agritech to develop and market the sensor.

“It’s totally wireless,” Parker said of the patent-pending device. “All you have to do is connect them to your phone through Bluetooth and put them on failure points, like bearings, and as long as you are in range, it will send you an alert, which will let you see what the issue is and get back to work quicker.”

The compact sensor can be used on any make or model of tractor or implement, and attaches with a powerful neodymium magnet.

While the magnet keeps the sensor in place, it also allows it to be easily transferred to other pieces of equipment.

“The technology has been available for some time, but I was very surprised when I started looking through the (U.S. Patent and Trademark Office) that no one had done something like this before,” he said. “When something goes wrong with machinery, heat is a byproduct, so if you can detect when something is getting hot, you can detect when a failure is about to take place.”

The technology may have been available, but Parker had work of his own to do.

“I had to plan out how the circuit was going to work, the mechanism of all of it, but after that, it’s pretty simple,” the sophomore electrical engineering and computer science major at the Massachusetts Institute of Technology said. “The equipment to manufacture circuit boards is way outside of our price range, so we farmed that out and have those manufactured by a third party. We 3D print our own enclosures, but we’re looking to move into injection molding later this month, and we assemble the circuit boards and housings ourselves.”

Sensors are in use on farms in Missouri, Kansas and Arkansas through a research and development partnership. The partnership has allowed producers to purchase 10 of the sensors at a discounted rate.

“Everyone has really liked them and we haven’t had any problems,” Parker said. “We’ve gotten some feedback and we’re going to be coming out with a new design that is a little more shock proof, much more weatherproof and has a longer use life.

“The power-saving technology is really revolutionary because the only thing that would put a cap on the lifespan of one of these would be how long the battery lasts. We’ve gotten the energy usage down to about zero; it’s very efficient. The failure point with these sensors would be weathering, but the updated design we’re working to get on the market for hay season this year takes care of a lot of issues we’ve seen starting to develop in the current sensors.”

The refined version is projected to be about $600 for a set of 10, which pales in comparison to the cost of a new piece of equipment.

The Temprevent product has gotten some attention from MIT.

“We got some seed money from MIT,” Parker said. “MIT has the Sandbox Innovation Fund, which provides grants for new companies that students, grad students and other people affiliated with the university start. They have been a big help with things, not just funding, but resources and connections with people, like the circuit board manufacturer. Last year, we got our 3D printer for the housings and that was something MIT turned us onto. We were originally going to use a pre-made, pre-fab enclosure, but we ended up changing the design a little and that would have been a major issue if we had gone the pre-fab route. It’s been a big help with the entrepreneurship program and their entrepreneurship ecosystem helping us out with people who have been down this road before.”

Parker said MIT is impressed with the progress made with the sensor.

“We had our first paying customer in August and they were pretty impressed we were moving so quickly compared with a lot of other companies,” he said.

Agriculture is not the only industry the Temprevent device can be utilized.

“We’ve talked to people in the trucking and manufacturing industry,” Parker said. “We’ve talked to a guy in Youngstown, Ohio, who has a factory that has had two fires in the last six months and he’s showing some interest. We’ve also seen a lot of interest from insurance providers, who have the biggest vested interest in preventing fires, but the sky is really the limit with something like this.”

Technology and its advancement is a passion for Parker and with his farming background, his venture into agricultural technology improvements came naturally.

“Agriculture has lagged a little behind in the tech industry, financial and digitalization sector,” Parker said. “Fewer people are going into agriculture. You’re seeing the percentage of the workforce in ag falling over the last several decades and at the same time the world population in the next 10, 20 years is expected to raise by several billion. We’re faced with producing much, much more food and resources with less manpower and the only way to do that is with technology and automation. It’s a market that hasn’t really been looked at by ‘big tech’ in Silicon Valley. Agriculture is something that is a wide-open market that really needs to be involved and I would love to be a part of pushing ag into the 21st Century.”

“That allows money to be reinvested into more growth, which will boost production,” he explained.

After college, Parker plans to return to his hometown and build his company, and he has a few additional ideas he would like to investigate.

“Lots of tech companies are starting to spring up outside of Silicon Valley and I think Missouri, being a state with low business regulations and being a friendly business environment can be a great place to start a tech company and see what we can do with innovations in agriculture. Agriculture is a very fertile market and I think we can do a lot to reduce risks, and save people time and money.

“People at the big tech firms and in Silicon Valley don’t see agriculture is as a potential market, but that time has come.”