The Heart of a Community 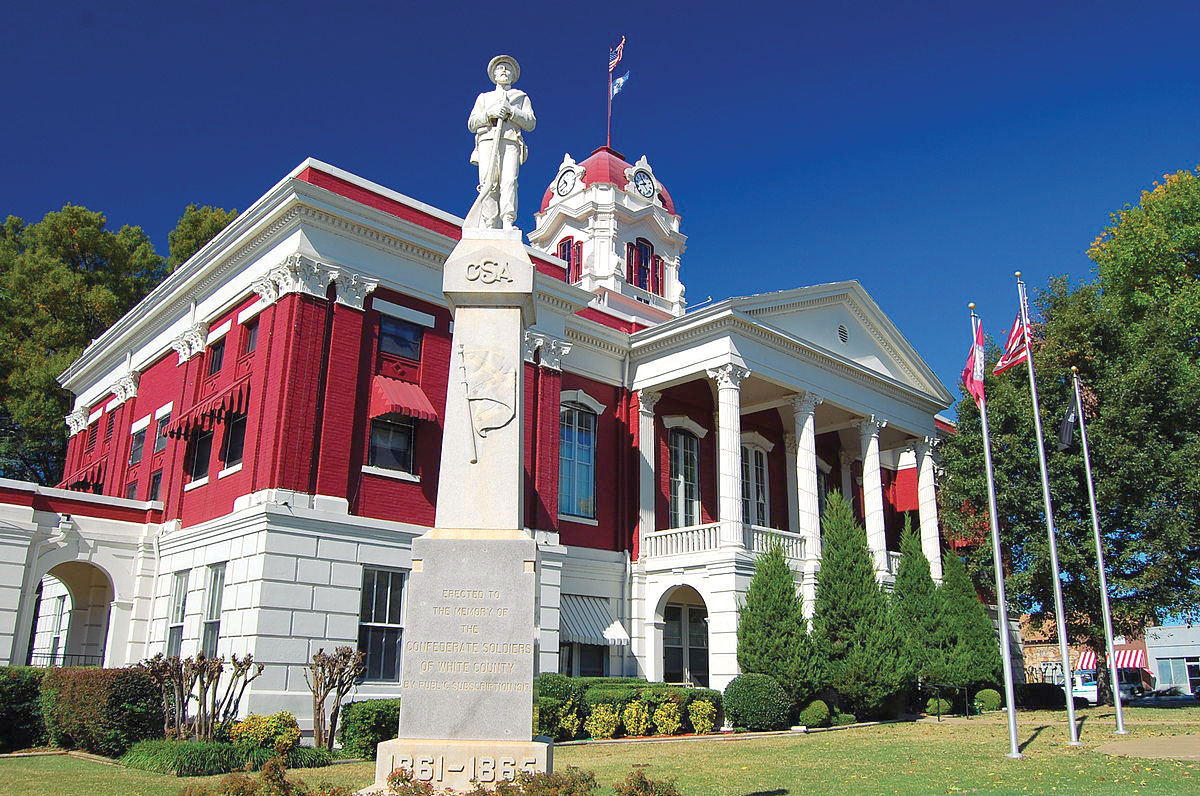 The White County, Ark., Courthouse is the oldest courthouse still used as seat of government in the state

White County’s Historical Courthouse located in the heart of downtown Searcy, Ark., a college town with a population of 23,768 people. The White County Courthouse is recognized as historically significant by the Arkansas Historic Preservation Program and was listed on the National Register of Historical Places in 1977.

The two-story masonry Georgia-style courthouse was finally finished in 1871 by Wyatt Stanford.

The courthouse still serves its original purpose. The magnificent courthouse is red and white, built of stone and brick with columns supporting the roof from the balcony of the second floor and protruding wings from the ground level on the north and sides of the building that were later added on in 1912. On the roof is a beautiful bell observation tower holding a bell dated 1855 that is still used to commemorate special events such as national victories, New Years and circuit court sessions.

On the corner of the courthouse stands a marble Confederate Memorial honoring White County soldiers who died, as well as memorials for World War I and II, Korean War and for the Veterans of the Vietnam War. The land where the courthouse is located had previously been owned by veteran Crawford Walker before he died in 1836, acquired as a bounty for the War of 1812.

In the 1840s and 1850s White County, Ark., experienced a large population increase and the need arose for a larger Courthouse. Israel Moore a land surveyor from Philadelphia, who was contracted to map out the streets of Searcy, honored a donation of the courthouse square as well as land for a city park and a church after a Supreme Court debate over the rightful ownership of the land.  The court ruled the land rightfully belonged to Moore.

The courthouse is in original condition under the rule of the chief executive officer for the county government, Judge Michael Lincoln, who authorizes and approves disbursement of all appropriated county funds. White County Courthouse is maintained by both county and city funds, having only undergone minor repairs and restoration after a fire inside the courthouse. It has been restored to its previous 19th century style with hardwood flooring and wooden benches. The White County Courthouse is the oldest courthouse still used as a seat for county government in Arkansas.

The courthouse square is the center of Searcy and is very much glimmering with activity today. Just across the street from the courthouse sits the beautifully lit up Rialto Movie Theater built in the 1920s, which is an added merit within the court square. Inside the square you will also find Leslie Jewelers, Quattlebaum music, a diner, a bakery, a bank, the Outside Art Gallery in the Valley, The Think Idea Studio, lots of boutiques, many little stores and neat places to pop into.

The courthouse square is a live with town gatherings, festivals and parades, classic car shows, a Santa hut during Christmas times, the honoring of the Holiday of Lights tradition and Searcy’s Farmers Market on the east side of the courthouse on the weekends which features locally grown fruits and vegetables, eggs, jams and jellies, herbs, and flowers, honey and handcrafted items. The courthouse is and will always be an important part of Searcy’s tight-knit community and remains as the most familiar root of Searcy’s origin.